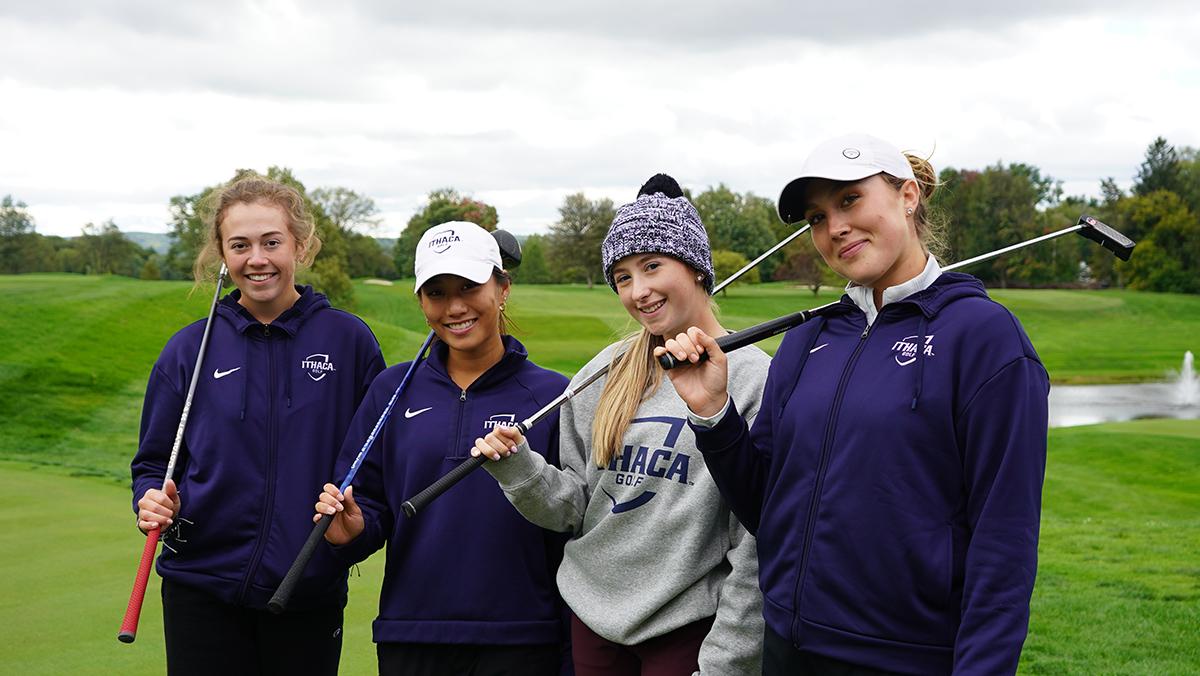 As the temperatures cool around South Hill, the Ithaca College women’s golf team is staying hot after three strong starts to their Fall 2022 season.

The Bombers kicked off their fall season at the St. Lawrence Invite on Sept. 3–4. Once the sun had set on the tournament, the South Hill Squad found themselves in first place, along with sophomore Rheanna DeCrow finishing as the top individual of the tournament.

“It was something I haven’t experienced before with a team,” DeCrow said. “And I was super happy to be able to do it with this group of girls. All of us have been working really hard all summer. It was rewarding to see us do well and take first in that field.”

Head coach Keith Batson said DeCrow worked hard throughout the summer to prepare for the upcoming season, and the first-place finish only validated his beliefs in DeCrow.

“She played in a few high-level tournaments in Iowa and had some good results,” Batson said via email. “I think she’s starting to realize how good she is. It was nice to see her get her first win.”

DeCrow said those tournaments and playing throughout the summer helped her find her love for the game again.

“I worked really hard over the summer,” DeCrow said. “I’ve been carrying that out onto the golf course just having so much fun and like just trying to enjoy the game. “

Also at the St. Lawrence Invite, first-year student Annika Michel made her debut with the South Hill squad. After struggling on the first day with a +21, Michel shot a +7 Sept. 4, improving by 14 strokes. Batson said Michel felt the nerves in her first collegiate start but bounced back nicely.

“[Michel] is very level-headed and doesn’t let much affect her,” Batson said via email. “It’s a great quality to have as a golfer. She is going to be a great player for this program.”

The Bombers followed it up with a seventh place finish at the Hamilton Invitational on Sept. 10–11.

For Batson, the Hamilton Invitational finish stood out to him in the early part of the season.

“In my opinion, we played better at Hamilton,” Batson said via email. “I know that must sound weird as we finished seventh instead of first, but the strength of the field was much higher at Hamilton, and the course was much more difficult. … The Hamilton tournament also included the defending national champions Emory [University], as well as other top 25 ranked teams. I was very pleased with our performance there. I think they realized they could hang with the best programs in the country if we brought our A games.”

Most recently at the New York University (NYU) Invitational on Sept. 17–18, the Bombers finished second in the tournament, only behind NYU. Senior Cristea Park led the way for the South Hill Squad in individual play. Park finished the two-day tournament with a 151(+9) after shooting a 76 on Saturday, followed by a 75 on Sunday. Park said the strong start has her feeling confident about the remainder of the fall schedule.

“The scores are just getting lower right now,” Park said. “I’m riding off of that momentum, currently, and feel good about the rest of the season.”

Batson said the way the team bounced back and helped pick up Michel up after she struggled the second day of the tournament was important in the team finding it’s way to a second place finish.

“The second day, Rhea, Cristea, and Mary shot 74-75-78 respectively. Annika struggled on the 2nd day, but it was nice to see our returners pick up their games so we could still have a great team score.  Annika also played really well the 1st day shooting an 81. Cristea shot her best 2-day score of her career and Rhea shot her college career low of 74 on the 2nd day.  A lot of things to be proud of on that weekend.”

Park said the key to ensuring the team keeps up the good start is to control the mental aspect of the game, making sure one doesn’t get inside their own head.

“Just because you have one good day doesn’t mean you’ll have a great day the next,” Park said. “The one thing that you can control is your mindset. The mindset is what will help me keep with that momentum. I’m feeling confident, but it’s because I’m forcing myself to feel confident.”

Batson said the mental side has been a key focus for the Bombers this half of the season, understanding that while the play on the course is one thing, the mental side is another, ensuring the team can play at their best and not let the game get to them.

“I am working really hard with them to get them to be more decisive, confident and trusting of their capabilities,” Batson said via email.  “They have made big strides in this department, and I believe that is why we are playing so well.”

Being more of an individual sport, the team works hard not to have anyone feel isolated while out on the course. DeCrow said the team has been working hard to make one another not feel isolated during play.

While the Bombers still have one more tournament before their fall season concludes, as the official Liberty League season starts in the spring, the team hopes to keep the momentum through their winter break. DeCrow said that being able to finish the season with the Ithaca Invitational, which is Oct. 1–2, is a good feeling as they get to show off the hard work to the home crowd.

“Any sport will tell you that being in front of the home crowd is an advantage and having that support system around you, people who will support you unconditionally — It’s really special,” DeCrow said.

Being able to finish the fall season in front of the home crowd is a play for the team, but DeCrow also said the advantages of playing your home course will give them a heads–up against the field.

“We play it every day, and we know this golf course better than anyone else,” DeCrow said. “Being able to capitalize on, you know, knowing the greens and knowing where to place your tee shots and stuff that we do it every day.”

Park said while in her mind it’s just a tournament, she enjoys ending the season without having to travel for the tournament.

“It’s nice to finish that way in the fall. It’s comforting,” Park said. “Our parents get to come and see us finish and our alumni are coming to watch. As a senior I think that’s super special.”

Once the fall season concludes, the team will go on a winter break. Batson said that finishing strong is critical for the team to have good feelings heading into the spring season.

“I always want them to be improving week to week,” Batson said via email. “Golf isn’t a sport where improvement will always show up in the number that you shoot, but they should be and are taking away something from each tournament they play in. I’ve seen a tremendous improvement in their confidence level and their belief in themselves.”