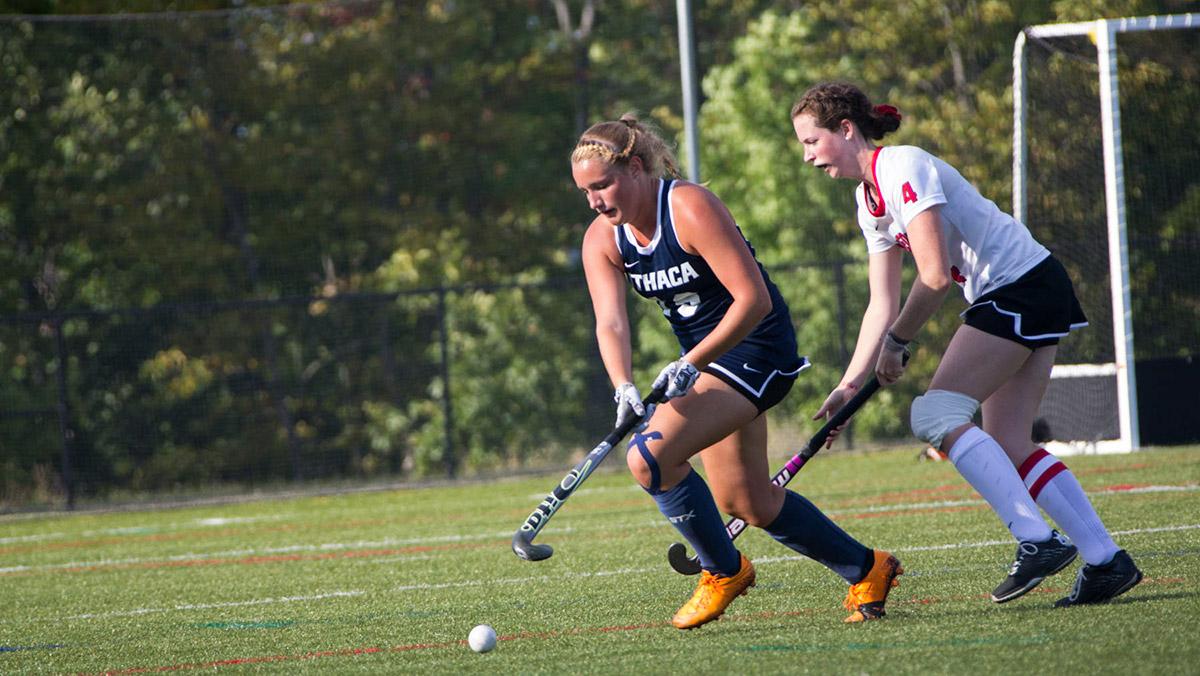 After defeating Utica College 3–0 on Sept. 10, the field hockey team kept its momentum going with a 4–1 victory over SUNY Oneonta on Sept. 13 at Higgins Stadium. With the win, the Bombers are now 2–2 on the season and 2–0 on its home turf.

The Blue and Gold opened up the scoring early when senior forward Lauren Delia registered her first goal of the season off an assist from senior midfielder Colleen Keegan-Twombly five minutes into the first half. While the Red Dragons outshot the Bombers 9–5 in the first period, the South Hill squad was able to hold its 1–0 advantage into halftime.

The beginning of the second half was similar to the first, as Delia netted her second goal of the game not even two minutes into the period, giving the Bombers a 2–0 lead. This time, it was off an assist from junior forward Michaela Donohue. However, the Red Dragons were able to score their lone goal of the contest when sophomore forward Kiley Lamoreaux scored off an assist from sophomore forward Allyson Wells to cut the Blue and Gold’s lead to 2–1.

With 10 minutes left in the game, the Bombers were able to tally two more goals that would ultimately lead to their 4–1 victory. The Blue and Gold’s third goal of the game came from sophomore back Maddy Ryan, assisted by Keegan-Twombly. Keegan-Twombly went on to score a goal of her own, her fourth of the season, to secure the Bombers’ 4–1 win over the Red Dragons.

Senior goalkeeper Katie Lass had seven saves on the day.

Up next for the Bombers is a contest against Empire 8 opponent Stevens Institute of Technology at 1 p.m. Sept. 17 in Hoboken, New Jersey.

Field hockey lost its second game of the season to SUNY Cortland Sept. 7.

The Ithaca College field hockey team lost to University of Rochester 4–1 in its season opener Sept. 1.