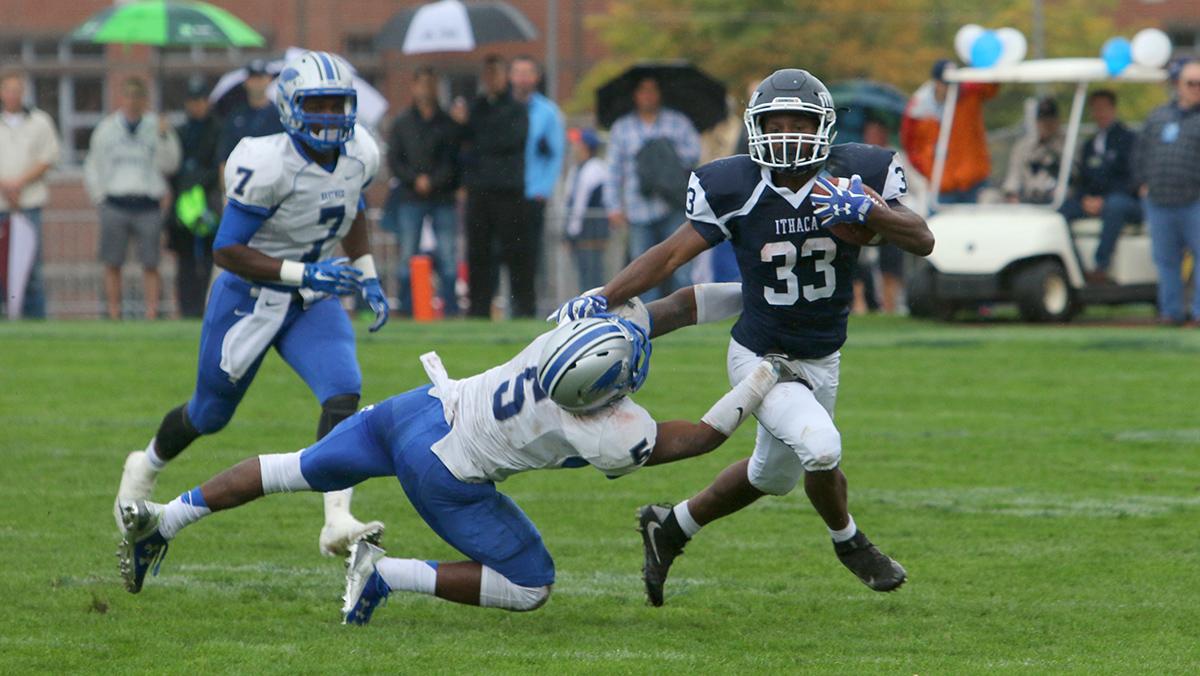 The Ithaca College football team defeated Hartwick College 50–27 Oct. 8 at Butterfield Stadium. This is the first time the Bombers have scored 50 or more points since Oct. 18, 2008, when they beat Frostburg State 51–24. They are now 3–2 on the season.

Hartwick began the game with possession, but was forced into a three and out. Hartwick’s punt landed on the back of Bomber sophomore defensive back Jovonte Long. The ball was recovered by the Hawks, and their drive continued, until Hartwick senior quarterback Billy Pine’s pass was intercepted by senior safety Anthony Skretny. The Bombers moved 89 yards in six plays, capped off by a nine-yard touchdown by junior running back Tristan Brown.

The Hawks answered back on their first drive of the second quarter, when Pine connected with junior wide receiver Brad Garcia for a three-yard touchdown. On the next drive, senior quarterback Wolfgang Shafer fumbled, and the ball was recovered by Hartwick.

On the fourth play of Hartwick’s next drive, sophomore linebacker Pat Minogue forced Pine to fumble, and the ball was recovered by junior defensive back Mike Miller. The South Hill squad then moved 55 yards in five plays, with Brown finding the end zone for the second time of the day off of an 11-yard rush.

Hartwick responded with an eight-play, 69 yard drive that ended in Pine hitting Hartwick junior wide receiver Koree Reed for a 19-yard touchdown to close out the first half with score tied at 13.

The Bombers began the second half with the ball, and went 64 yards in 10 plays to score their third touchdown of the day on an a 10-yard run from junior running back Evan Skea.

After punts from the Hawks and the Bombers, Hartwick began its next possession pinned on their own four yard line.

After an incomplete pass on first down, Minogue hit Pine in the back of the end zone for a safety, putting two points on the board for the Bombers. On the next drive, the Bombers moved 40 yards in five plays to score another touchdown on a two-yard run from Skea, making the score 29–13.

The Bombers began the fourth quarter with first and goal on the Hartwick five yard line, and after two running plays, Shafer connected with junior wide receiver JR Zazzara for an 11-yard touchdown.

On the first play of the next drive, junior linebacker Kenny Bradley stole a pass from Pine and returned it to the Hartwick five yard line. Shafer then found Zazzara another touchdown.

The Hawks kept fighting, despite being down 30 points, and Pine connected with Reed for a 29-yard touchdown. The Blue and Gold answered back on the next drive, when Shafer found freshman wide receiver Will Gladney for a 25-yard touchdown, the first of his career.

Pine hit Reed for a third touchdown late in the fourth quarter, but it was not enough to catch the Bombers.

Head coach Mike Welch said a high scoring outing such as this bodes well for the rest of the season.

“Putting up 50 points gives us a lot of confidence,” Welch said. “So, moving forward, we know what we capable of, and we should be able to start doing some big things offensively.”

Hartwick was held to its lowest point total of the season in this game. Hartwick head coach Mark Carr said the Bombers’ ability to stop the run was a key factor in that.

Skretny said he thought the defense played well, but he knows they can do better.

“I thought we played the pass really well, and we were able to force turnovers, Skretny said. “But we allowed 27 points, and our goal is 14, so we have to find a way to give up fewer points.”

They Bombers next game will be at 1 p.m. Oct. 15 when they travel to Brockport, New York to take on The College at Brockport.

The Ithaca College football team lost to Alfred University 20–6 Sept. 24. The Bombers are now 1–2 on the season.