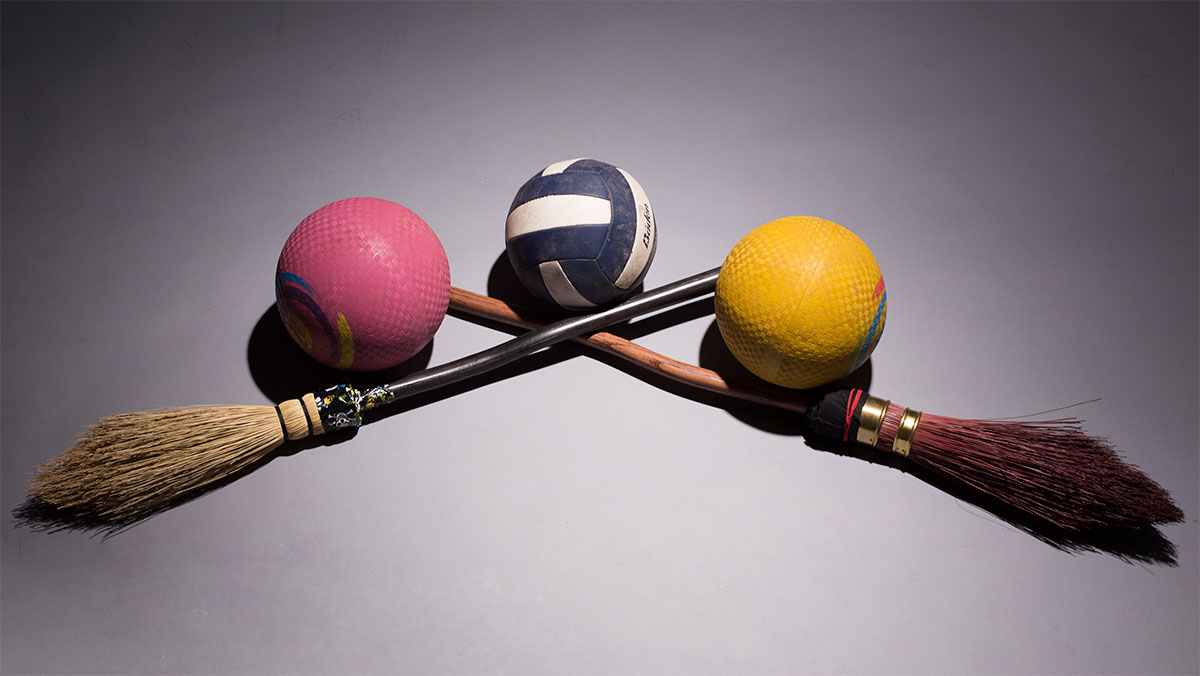 Similar to any athletic team on the Ithaca College campus, when the Quidditch team takes the field for matches, the players sport “Ithaca” in large print across the front of their jerseys. They don blue and gold uniforms and compete, just as any other squad would.

“We get away with it because we say ‘IC Hex,’ but technically it’s ‘Ithaca Community Hex,’” junior team president Madison Mangano said. “We get away with that really nicely, but it wouldn’t work for most other schools.”

Many other schools — including Empire 8 opponents Alfred University and Nazareth College as well as SUNY Cortland, Cornell University and Syracuse University, to name a few — do not have to face this issue, as their Quidditch teams have gained recognition from their respective sport club departments. Mangano said she, along with past presidents, have tried and failed on three separate occasions over the past five years to become a club team.

It’s not only the ability to represent the college that has prompted Mangano and the rest of the team to work toward gaining club status, however. Association with the college would allow the team to reserve practice facility space during the winter when it is not able to practice outdoors due to weather, advertise on campus and gain funding from the college for travel and other needs.

The difference between now and the other two times the team has attempted to gain club status — the last of which was in 2012, during Mangano’s freshman year at the college — is the improved safety of the game, Mike Ostman, sport clubs program coordinator, said. While Quidditch is a full-contact sport, the United States Quidditch Association has recently made changes, such as instituting a concussion policy and hiring a USA Rugby certified coach to spearhead a study to make tackling safer to help decrease risk of injury.

“Initially, when they were first considered for club status, to my understanding it was a free-for-all at competitions,” Ostman said. “There were not many rules based on safety. There were many injuries, so a couple of years ago, there was total justification for it. At this point, after working with multiple national governing bodies, U.S. Quidditch is one of the most organized, and they know what they need to improve on. They know that safety has been a weakness.”

Because of this, U.S. Quidditch has implemented rules and regulations to help prevent injury. In 2014, the organization published the eighth edition of its rulebook, which features an expanded list of illegal physical contact.

Kara Levis, U.S. Quidditch’s Northeast coordinator, said these changes were enacted to make the sport safer, and the organization is continuing to improve the sport, safety-wise, as it progresses to its ninth edition of the rulebook, which is scheduled to publish over the summer.

“On Nov. 20, USQ released an article outlining a concussions policy and restricting any players from competing with any symptoms of a concussion,” she said. “Those recommendations will be kicking in for the ninth edition of the rulebook.”

A press release on the U.S. Quidditch website details the new concussion policy, which will work to reduce the number of concussions experienced in the sport. Mangano said injuries, including concussions, have been an issue for the team in the past, but the new rules should give the team enough leverage in its quest for club status. The college’s risk management department, which would serve as one of the key determining factors in whether the sport is safe enough, declined to be interviewed for this story.

“That’s a big worry, and that’s understandable,” Mangano said. “But there are seven refs on the pitch at a time. They really try to make sure that you’re not hurting anyone. They take it really seriously.”

Safety, Mangano said, is the biggest obstacle the team is facing in regard to getting approved for club status. She said the team’s 2012 efforts were shut down because the game’s official rules were not sufficiently defined.

“I saw the girl who was leading the project in tears once or twice, she just worked so hard on it,” she said. “They ended up getting rejected again even though they had put a lot of work into it. Risk Management didn’t love our injury statistics, didn’t love that it was such a new sport, because the rule book is constantly changing.”

Mangano also pointed out that the sport club department includes other full-contact sports, such as rugby, in its program. According to a February 2015 article in The Telegraph, 13 percent of players have sustained at least one concussion in the English Aviva Premiership rugby league.

While Mangano said injury is certainly a concern in Quidditch — as it is in rugby — it is not a reason to exclude the sport from the college’s sport club department. Ostman echoed her sentiment, citing the rule changes as a positive step toward Quidditch attaining club status. He also said the recreational sports department has both the funding and facilities to accommodate the team.

The process of becoming a sport club, however, is complex. Ostman said the group must first present a proposal to him. It is then moved to the Sport Club Committee, which is made up of representatives from various departments in the college, including the Office of Admissions, the Athletics Department and Risk Management. The proposal is vetted by that committee, which comes to a decision on whether the group is eligible for club status.

Right now, Mangano said, she is working to update the team’s proposal to put it through the steps necessary to begin the process. She said attaining club status would be not only a huge financial relief for the team but would also boost its morale.

“Right now, there’s a huge morale issue on the team with saying ‘Yes, we go to Ithaca College and we play Quidditch at Ithaca College, but we can’t be part of it,’” she said. “It’s definitely a frustrating thing for a lot of students to hear.”

Making the process even more discouraging, Mangano said, is the fact that other schools — most of the team’s competition, in fact — have club status at their respective schools. Paige Hammond, SUNY Cortland’s Quidditch team’s president, said her team would not exist without support from the school, and that, at least in her year-long tenure as president, her team has not had any problems with administration regarding the sport’s safety.

“We wouldn’t be able to be a team if we weren’t associated with the school,” Hammond said. “We really haven’t had to deal with our risk management department. There are a lot of different benefits for us.”

Those benefits, Hammond said, range from practice space to on-campus advertising, but for Mangano and the rest of The Hex, the biggest benefit would be the ability to identify as a school-supported athletic team.

“Hopefully I can get us club status,” she said. “That would probably be my greatest achievement with these guys. I love this team. They were the first family I had on campus.”

Ostman said, as a club Ultimate Frisbee player during his undergraduate career at St. Mary’s University, that he recognizes the importance of school association, both from a morale standpoint and from a recruitment standpoint. It is for these reasons, he said, that he supports The Hex’s quest.

“It was the best thing I ever did,” he said. “I want every student to have that same experience. I didn’t get into this profession to tell a well-organized and passionate group of students that they can’t be a club. Then, there’s the recruitment and retention of students. When all these schools, Cortland, Syracuse, Cornell, RIT, all these schools that we compete with for students have this activity. That’s a differentiator.”