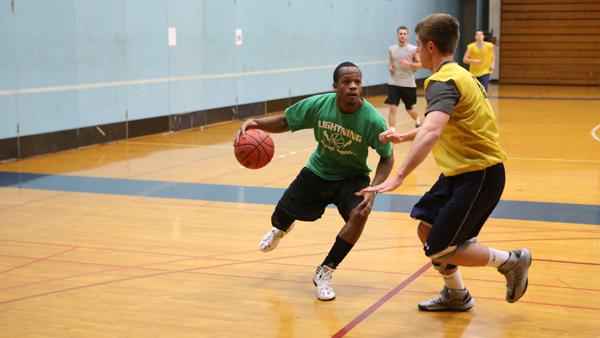 During intramural basketball season, the basketball courts in Hill Center are always open and games are being played on each of the three courts. On the first court, groups of friends hustle up and down the court in a casual game, while a hard fought contest between two rival teams takes place across the blue, retractable walls that separate the courts. Some teams have a high skill level, viewing each game as a stepping-stone to a championship, and others just wanted to shoot hoops for fun.

Many students look to intramurals as their only source of athletic competition on campus. This semester, one of the most popular intramural sports, the men’s 5v5 basketball league, has seen a large increase of participation in the semi-pro league and a decrease in pro-league teams. The Office of Recreational Sports is also considering adding a third, less-competitive league.

Men’s 5v5 basketball is currently split into two leagues, pro and semi-pro. The pro league allows more club players per team, so players tend to be more experienced. About 10 to 12 teams suit up for the pro basketball league in a given year, but since 2010, these numbers have significantly decreased. This year there were five pro-league teams. The sign-up list for the pros is getting shorter, while semi-pro sign-up sheets are running off the page. This semester, a total of 249 students are enrolled in the semi-pro league, while 43 are in the pro league.

“We are getting more and more people signing up for co-recreational and semi-pro teams,” Flickinger said. “We are starting to see a decline in the pro league, and I don’t know why.”

The 2008 and 2009 pro-league seasons had healthy rosters of 10 teams competing, but steadily those numbers had decreased to five in 2010. In recent years, those numbers have held steady, maintaining around five or six teams. On the other hand, the semi-pro league is growing, having 29 teams enrolled in basketball alone this season. This recent shift has left pro teams scrounging for players, while semi-pro leagues are bursting at the seams.

Flickinger said the level of competition that exists in the pro league might intimidate students. He said the semi-pro league is more for casual basketball players to hone their skills and have fun, while the men’s pro league is where the “best of the best” from around campus come to showcase their skills.

Rules are in place that limit the number of club players per team to three in the pro league and two in semi-pro. Each team must be at or below the limit of club players before being approved to join a league.

“Maybe a lot of people feel that the competition [in the pro league] may be too intense for them,” Flickinger said. “I don’t know if it’s because of the way they are gauging their own abilities or whether or not they think they can compete. There might be a shift towards students wanting a more recreational feel, to take it seriously but not to the extent that pro teams let on to.”

A matchup on March 4 between the Monstars and One Pillow No Pillowcase was a prime example of the level of competition that is customary in the pro league.

The game was filled with shouting matches, controversial calls and adrenaline. The 47-45 victory over One Pillow No Pillowcase came when Monstars guard Joe Zenz nailed the winning jump shot as time expired. The entire team piled on top of him and began celebrating its invitation to the championship. An elated Zenz said when playoff competition begins there is a whole new serious attitude. He also said the competition in the pro league is heated and full of parity.

Contrary to the more competitive nature of pro league, many players opt for the semi-pro league, a more relaxed environment. Branden George, a player for the semi-pro Washington Generals, said semi-pro allows athletes who do not play basketball to do something fun and different.

“I think a lot of the guys in pro are on clubs or are just staying in shape for the offseason,” George said. “Me, I row. So this is just kind of on the side for fun.”

With 29 semi-pro teams and a wide range of talents, there is variation in the skill levels of players. In Division I of the semi-pro league this season, the top team, T6 Mafia, won by an average of 19 points en route to an undefeated season. Tune Squad, the last place team in the division, lost by more than 25 points per contest.

Russell Troeller, a semi-pro player on the Washington Generals, said the inequality that was present in the semi-pro ranks this year affected his team to the point where there may need to be some restructuring of the league.

“We were completely out-sized,” Troeller said. “I mean, we were playing against the entire offensive line of the football team. They need a better way of splitting it up.”

Troeller said his participation comes second to his other activities and that semi-pro is intended for a beginner’s skill level.

“I play other sports,” Troeller said. “This is more of a recreational thing. We don’t play basketball. None of us have really played in high school or anything. Semi-pro is just a bit easier for new people to the sport.”

Flickinger said his goal is to make all levels of intramurals accessible, regardless of the talent gap in divisions.

“I think that might be a factor in people shying away from pro,” Flickinger said. “They may be afraid and think to themselves: ‘There are so many club players.’ That’s why we have that rule in place.”

Because of the large number of players in the semi-pro league, there is a wide range of talent. The discrepancy in talent has been noticed by the Office of Recreational Sports, which has inspired them to make plans for a third, less competitive league called a “recreational league.”

Flickinger has noticed that the increased number of players within the semi-pro league has diminished competitive equality.

“There is a discouraging talent level gap between our best semi-pro players and those who participate to participate,” Flickinger said.

Players in the recreational league would act as their own referees during games, and there would be no t-shirt for the champion. Flickinger said these changes could take effect as soon next fall.
“Who knows,” Flickinger said. “If we split it up like that, maybe we will get not only a better filtering of what teams go where but even more individuals, because they feel more comfortable.”