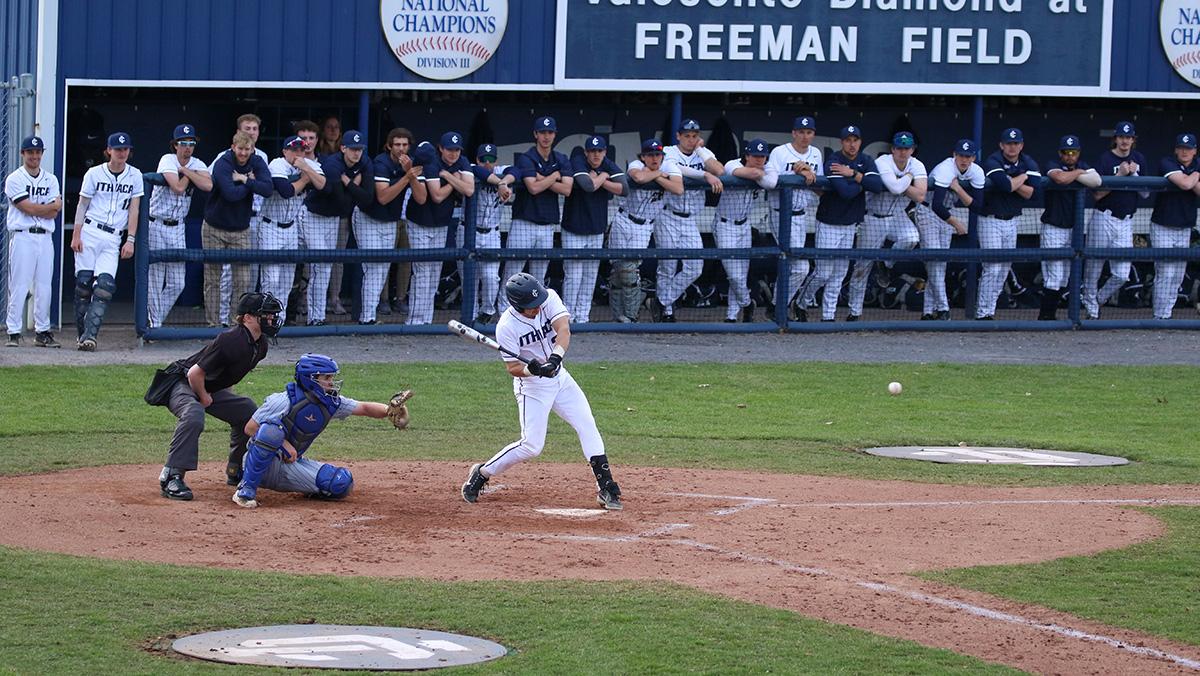 Ryan Pillion/The Ithacan
The Ithaca College baseball team held on for a 13–7 victory over Hamilton College on April 5. The win improved the Bombers' record to 15–5.
By Tobiah Zboray — Staff Writer
Published: April 9, 2022

The Ithaca College baseball team made its return to South Hill on April 5, defeating Hamilton College 13–7 in the club’s home opener at Freeman Field. The win improved the Bombers’ record to 15–5 on the season, while the Continentals fell to 9–9.

On the mound for the Bombers, junior pitcher Garrett Bell impressed in seven innings of work, allowing just three runs and four hits while striking out eight batters. The Bombers were led at the plate by graduate student first baseman Buzz Shirley, logging three hits and driving in four runs for the Bombers. The highlight of Shirley’s game was a home run to right field, which made the score 5-0 Bombers.

Bombers head coach David Valesente said he enjoyed the team’s first home game of the season, as the team was able to return to South Hill and play in front of its fans.

“It was fantastic,” Valesente said. “We couldn’t have asked for a better day weather wise. The energy was high, the guys showed up ready to play, we thought that today was fantastic. It’s great to be back on Freeman Field.”

After a scoreless first inning by both teams, the South Hill squad scored the first run of the afternoon in the bottom of the second inning to take a 1–0 lead. Freshman second baseman Riley Brawdy drove home freshman shortstop Connor Pedersen with an RBI double to left-center field.

The Bombers added to that total later in the second, courtesy of home runs by sophomore left fielder Louis Fabbo and Shirley, who combined to bring in 4 four runs in the inning, making the score 5–0 Bombers after two innings of play.

Hamilton scored its first runs in the fourth inning, scoring a pair on an RBI double down the left field line and an RBI single to left, making the score 5–2 in favor of the Bombers.

The South Hill squad answered back in the bottom half of the frame as Brawdy scored on a sacrifice fly to center field, making the score 6–2 Bombers.

The teams traded a run in the sixth inning, with the Continentals scoring on an RBI double. The South Hill squad responded with a sacrifice fly by junior catcher Gil Merod, which made the score 7–3 in favor of the South Hill squad.

The club added to its run total in the seventh inning, scoring four runs on three hits to take an 11–3 lead. The outburst was the result of sophomore outfielder Colin Shashaty lining a two-run double and Shirley hitting a two-run single.

That would not be the end of the scoring for the Bombers, as an extra two runners crossed the plate in the eight inning on a two-run double to right field by sophomore infielder Ethan Rothstein, advancing the score to 13–3 in favor of the South Hill squad.

The Continentals looked to make a comeback in the ninth, scoring four runs off graduate student Brett Budzak, which made the score 13–7 Bombers. This would hold as the final score.

The Bombers will stay on South Hill to face Bard College in a doubleheader beginning at 1 p.m. April 9 at Freeman Field.