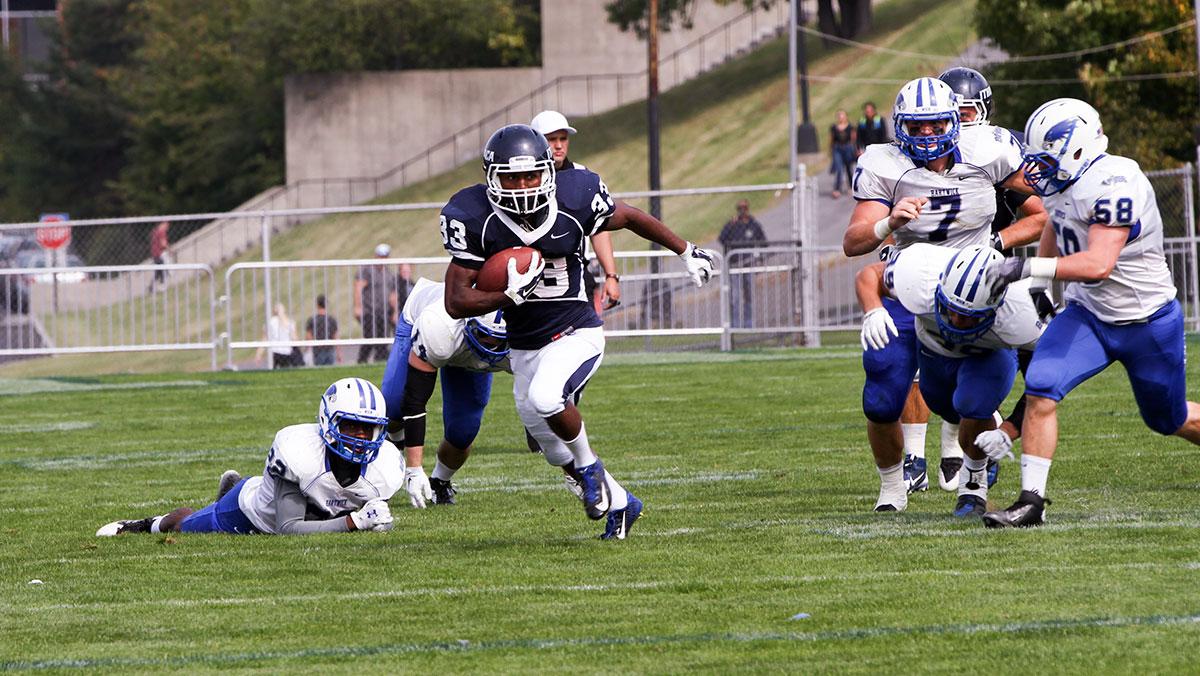 The football team began its Empire 8 season strongly with a 42–7 win against the Hartwick College Hawks Saturday at Butterfield Stadium.

“It was an inside play, initially,” Brown said. “It was clogged up and I bounced it outside and the receiver did a good job blocking, so I just ran to the open space and just kept running.”

The Bombers (2–0, 1–0) found early success on the ground with sophomore Shawahl Abdur-Rahman finding success on inside and outside runs. Their early rushing success would be rewarded with Cary’s first touchdown reception from senior quarterback Tom Dempsey. While Dempsey did throw two touchdown passes, his day was marred by three turnovers, including fumbles lost on consecutive drives in the second quarter. His first fumble came on a botched exchange with senior center Bobby Garone and the second came as he was running for a first down. Head Coach Mike Welch said the team recognized the crippling effects turnovers can have.

“The score should have been a lot different at halftime,” Welch said. “They recognized it so you just have to be more conscious. [Dempsey] needs to know that when you’re advancing upfield you need to tuck the ball away.”

The Bombers defense kept the Hawks first-team scoreless and sacked junior quarterback John Garcia five times. They held the Hawks to only 26 rushing yards and junior running back Greg Bell to only 13 yards on eight carries, one week after rushing for 331 yards. The Blue and Gold’s defensive line stood out in particular, with junior defensive lineman Schnayder Termidor leading the way with two sacks, including a crucial sack to end the Hawks’ first drive. Termidor said he is just one of several experienced defensive linemen who can contribute.

“We have the most experience on the defense,” Termidor said. “I feel like the defense works as a whole but when we need something, the defensive line has the experience to make a play.”

In its next game, the South Hill squad will travel to Alfred University to take on the Saxons at 1 p.m. on Sept. 27.