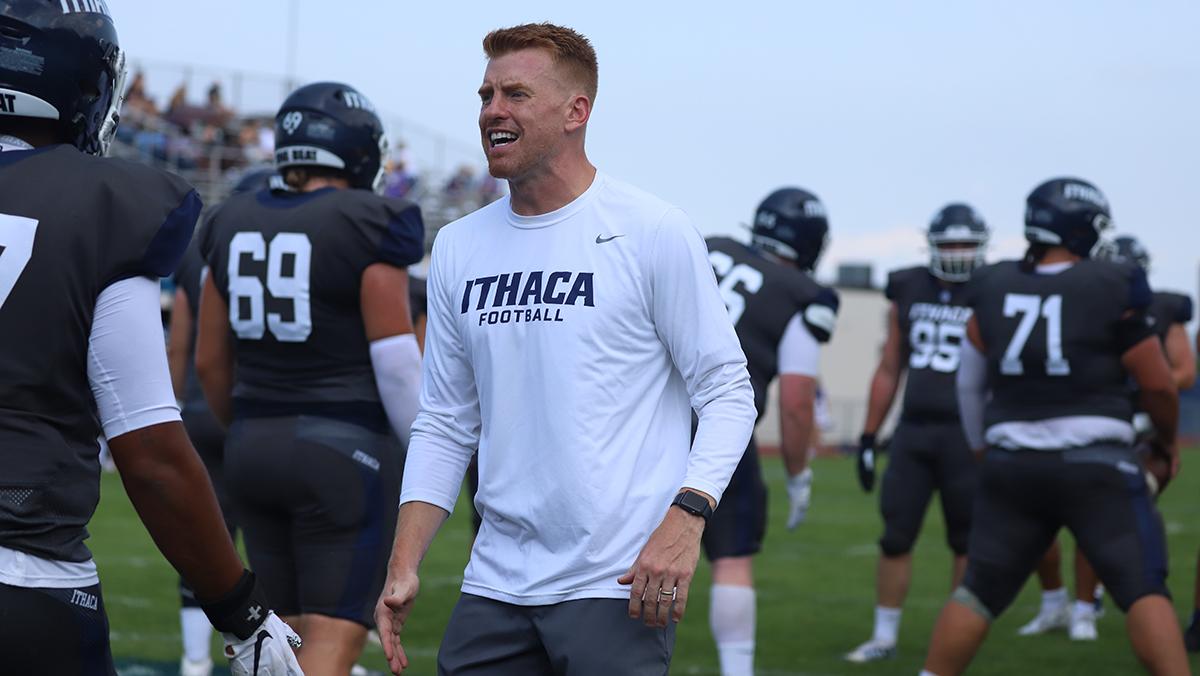 Nolan Saunders/The Ithacan
Under Michael Toerper, the new head coach of the Ithaca College football program, the Bombers have started 3–0 and have been dominant on both sides of the ball.
By Tommy Mumau — Senior Writer
Published: September 28, 2022

The Ithaca College football team is off to a scorching 3–0 start to the 2022 season under first-year head coach Michael Toerper.

Toerper has led the team to an undefeated start behind dominant efforts on both offense and defense. The Bombers are averaging 42.3 points per game on offense and have allowed just 5.7 points defensively per contest. The South Hill squad has outscored its opponents 127–17 through its first three matchups. The head coach said he has been impressed by how the team has competed thus far, and he wants the group to maintain its positive energy through the ups and downs of the season.

“I think we have a group that shows up with enthusiasm and [is] excited to play the game with each other,” Toerper said. “I think that’s something that we have to continue to do because there’s going to be a lot more adverse times that arise as the season progresses, and we have to be the type of people that smile in the face of adversity and respond the right way.”

Following a two-year stint with the College of the Holy Cross in Worcester, Massachusetts, from 2020 to 2021, Toerper was hired by Ithaca College on Feb. 18. This is his first role as head coach in his 13-year coaching career, which included a three-year stretch as defensive coordinator for the Bombers from 2017 to 2019.

Toerper said he has enjoyed adjusting to the position of head coach through the first three games of the season.

“It’s more of a holistic view of the program,” Toerper said. “In years past, it’s been more of a focus, just looking at things from a smaller lens. Now from a larger lens, there’s a lot that goes into it. … Rather than just really just focusing on the defense or a position group, I’ve got to capture a pulse of the whole team and be able to make quick decisions that affect a lot of people.”

These decisions on the sidelines so far have resulted in the South Hill squad being considered among the top Division III football programs in the country. The Bombers have moved up from No. 17 to No. 13 in D3football.com’s top-25 poll, from the preseason through week four.

Graduate student defensive back Michael Roumes, a captain, said he believes the coach has been instrumental in the team’s early success.

Roumes has spent time as a punter this season and said Toerper has played an important role in the squad’s game plan on special teams. Along with his duties as the head coach, Toerper is also working with the team’s wide receivers and strong safeties. The head coach said he has navigated these new roles by relying on input from members of the program.

“I’ve also utilized the expertise of our assistant coaches to help make some of those decisions,” Toerper said. “I think that’s something that any leader, if they want to make the best decisions for the team, they have to demand feedback not just from the coaches but also the players. And I think that’s something that really I’ve been trying to do a good job of, is talk to them about the way the season’s going or the way practices are going.”

Among the members of this year’s staff, Toerper previously worked with four of these coaches during his first stint on South Hill. Offensive coordinator Sean Reeder, strength coach Vic Brown, tight end coach Josh Kowalczyk and defensive coordinator Trevor Warner all have experience working with Toerper.

Reeder has been on the staff for each of Toerper’s four seasons with the Bombers, and said he has enjoyed working alongside him as the head coach.

“He does a great job [of] really listening to what the staff believes we need to do to win the game,” Reeder said. “And then taking all those opinions [and] distilling it down to one message for what we need to do to win and play complimentary football, which is something we’ve done well over the first few weeks.”

Toerper also said he has tried to be a mentor for the players and help them manage the demanding schedule that comes with being a student-athlete. Roumes and senior wide receiver Julien Deumaga said Toerper met with each player to get to know them after he was hired in the spring semester.

“He really makes me feel like he cares about me and every other player on the team,” Deumaga said. “When we saw that [Toerper] was making that conscious effort to really get to know every single one of us, I think that just meant a lot to not only me but most definitely the younger guys.”

Toerper and the Bombers have seven games remaining on their regular season slate, as the team will look to reach the Division III NCAA tournament for the first time since 2014. The head coach said his return to South Hill has been memorable thus far, as he has embraced the role of leading the program.

“I enjoy being around this team every day, this group of coaches, this administration [and] the alumni,” Toerper said. “Everything about it, I really enjoy and … it’s not just about the way it makes me feel, but I think watching them come together as a team and doing the right things on the field and off the field really makes me a proud coach.”