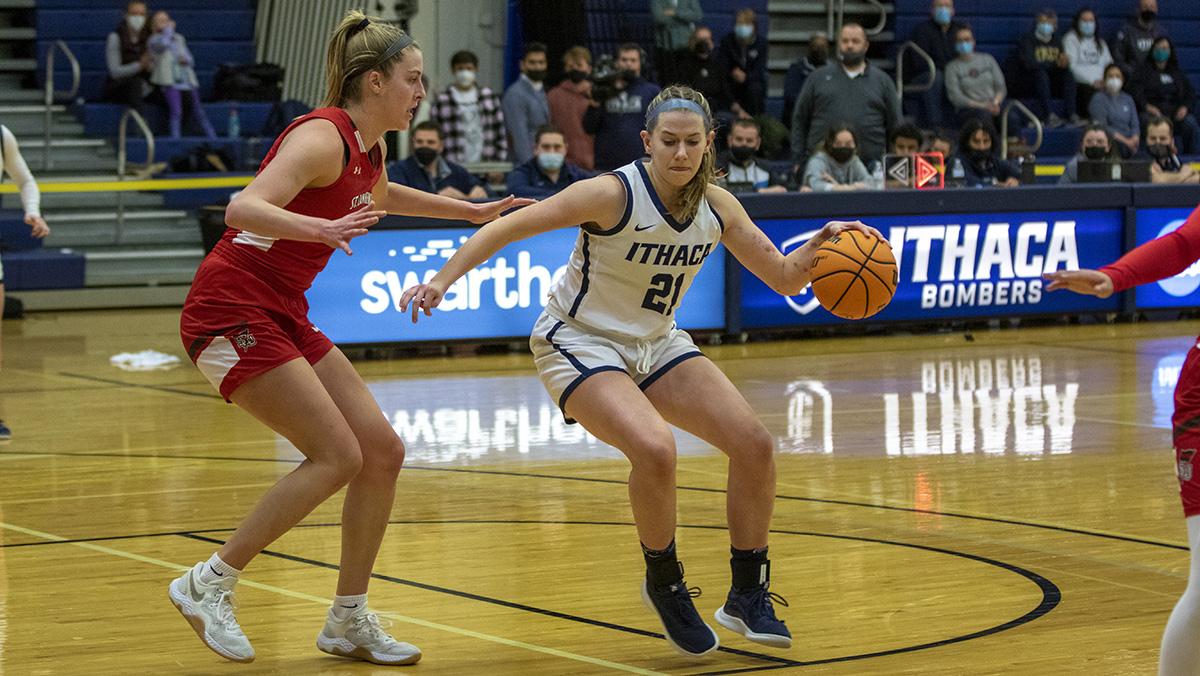 The No. 23 Ithaca College women’s basketball team has won the 2022 Liberty League Championship. The Bombers defeated the St. Lawrence University Saints 70–58 Feb. 27 at Ben Light Gymnasium. The victory extends the team’s win streak to 19 games and improves its overall record to 24–3 on the year.

The win marks the program’s third consecutive Liberty League title and its first since the 2019–20 season because the league canceled the 2020–21 campaign as a result of the COVID-19 pandemic. The championship also gives the team an automatic spot in the NCAA Tournament. Graduate student guard Grace Cannon set the tone by leading the Bombers with 26 points and five steals. She was named the Most Outstanding Player for the tournament, averaging 19 points and three steals over the last two games. Senior guard Cara Volpe also played a pivotal role, recording 15 points and leading the South Hill squad with four assists.

Cannon said she was proud of the team’s effort in the contest and was happy to share the experience of winning her third Liberty League title with this year’s group.

“We waited two very long years for this and you kind of remember the feeling, but it never really gets old,” Cannon said. “It was just great to be with my teammates, and for those first-years and sophomores that are getting their first [title], it won’t be their last, but I’m really glad to be here for their first.”

St. Lawrence posted a solid effort, holding the lead for over 25 minutes of the game. The Saints also led by as much as 10 points, taking a 31–21 advantage at the end of the second quarter. Junior Olivia Middleton and senior Katie Frederick tied for the team lead in points, scoring 15 each.

Turnovers were the difference in the game, allowing the Bombers to score 22 points on 20 turnovers by the Saints. The South Hill squad also stole the ball 12 times and collected 34 rebounds, including 11 offensive boards.

Head coach Dan Raymond said he was impressed with the way his team competed and its ability to adapt throughout the game.

“We’re tough,” Raymond said. “We’re a team that can make adjustments during the course of a game and a lot of those adjustments are made by the players themselves. So, I give all the credit to the players.”

The Bombers trailed the Saints early in this one, facing a 7–2 deficit just 2:13 into the game. But Cannon helped even the score at 7–7 just over two minutes later, netting a pair of layups and converting a free throw shot after drawing a foul on the second bucket. Each squad then traded baskets to advance the score to 11–11.

St. Lawrence finished the final 4:33 of the quarter on a 9–4 run, capping off the scoring outburst with a 3-pointer by senior Ava McCann. The South Hill Squad was down 20–15 at the end of the first quarter.

The Saints continued their impressive start in the second quarter, maintaining their lead for the remainder of the first half. A total of five players scored for the South Hill Squad in the quarter, combining for 13 points. The Bombers trailed the Saints 33–28 as the squads entered halftime.

The Bombers came out of the break with high energy, starting off the second half on an 8–2 run in the first 2:08 of play. Cannon accounted for six of these points, converting a trio of jumpers. The South Hill Squad ended the third quarter with a 51–49 lead, courtesy of a buzzer-beating jump shot by sophomore guard Hannah Polce. The fans at Ben Light Gymnasium erupted after this basket and showed their excitement throughout the game.

“The crowd was great,” Cannon said. “We know [that] every time we host at home, that’s why we always want to be at home. It’ll always have a great energy and great atmosphere.”

The Bombers swapped the lead with the Saints for the majority of the fourth quarter until junior forward Emily Dorn put the team ahead 58–57 by netting a jump shot with 3:31. The South Hill squad never looked back from this point on, finishing the game on a 12–1 run. Dorn also accounted for five points during this stretch.

The Bombers are set to face off against the Catholic University Cardinals on March 4 in the first round of the NCAA Tournament. Raymond said he believes his team is in a good position to compete against the top teams in the nation.