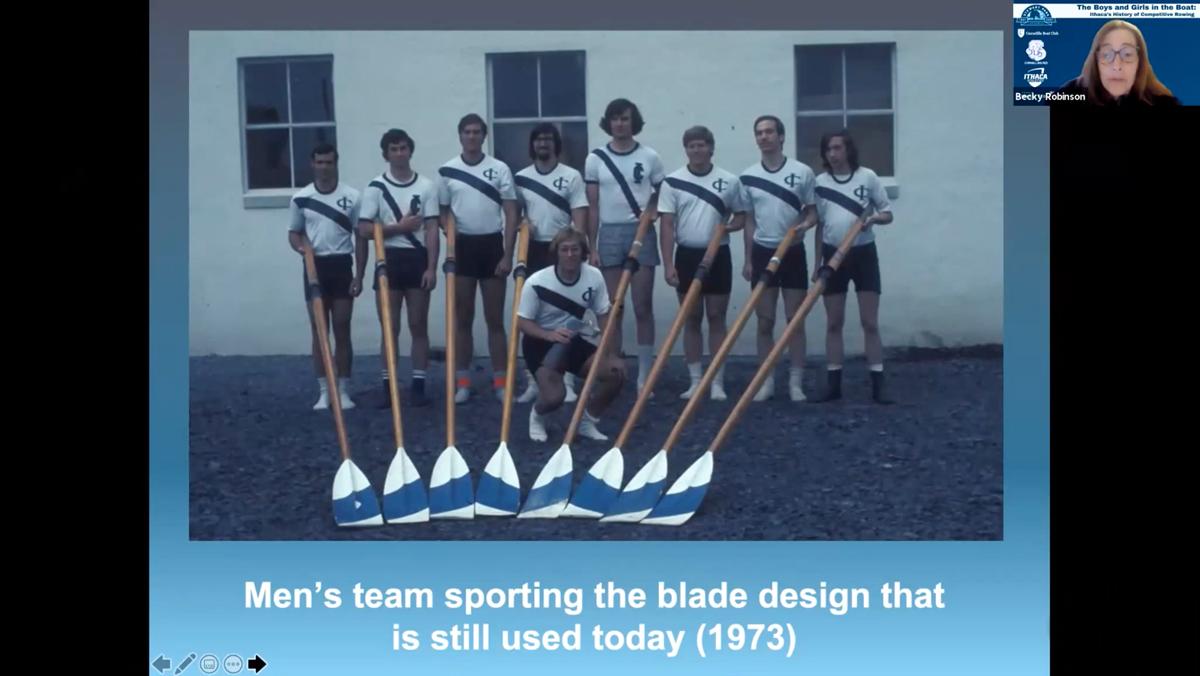 Courtesy of Friends of Stewart Park
Becky Robinson discussed the history of the Ithaca College rowing program during the event.
By Tommy Mumau — Assistant sports editor
Published: May 4, 2021

The Friends of Stewart Park celebrated the illustrious history of rowing in Ithaca with the virtual event, “The Boys & Girls in the Boat: Ithaca’s Amazing History of Competitive Rowing.”

On April 28, the event provided attendees with an in-depth look at the history of rowing at Stewart Park, as well as the history of Ithaca College and Cornell University crew programs. Approximately 80 people attended the virtual event. The Cornell rowing program was established in 1873, the presentation stated. The Cascadilla Preparatory School opened its rowing program in 1894 and the Cascadilla Boathouse was completed in 1896. The boathouse is located in Stewart Park.

The program was one of several events in the group’s Centennial Program which aims to celebrate Stewart Park’s 100-year history. The Friends of Stewart Park promoted the “Mayor Stewart Centennial Challenge” during the event in an effort to increase funding for the park. The organization is challenging Ithaca residents to match a $150,000 donation made by Ithaca Mayor Edwin Stewart in 1921 to improve the park for future generations.

“He could tell that I had the potential to be a stellar oarswomen,” Davies said. “That moment, that chance encounter, changed the rest of my life.”

Byrnes began his rowing career at the boat club while attending high school in Ithaca after moving to the area from Toronto. The two-time Olympic medalist said he has fond memories of his rowing experience in Ithaca.

“I really appreciated my time at Cascadilla,” Byrnes said. “It’s really a unique facility, a unique spot, and a way to get people in the community involved with the lake… It’s a great place and I’m really pleased to have been able to spend so much time rowing at the boat club.”

In her presentation, Robinson discussed the current state of the college’s rowing program, noting the $2.6 million Robert B. Tallman Rowing Center that serves as the home of the men’s and women’s crew teams. The facility opened in 2012, and the program has been using it ever since. Robinson said the facility has greatly enhanced the operations for the program.

“This is truly a top-notch facility for our athletes and coaches,” Robinson said. “We have many donors to thank for this amazing facility. The Ward Romer Boathouse actually doubles the equipment storage, [compared with] the original Haskell Davidson Boathouse.” The college’s original rowing facility was located at the Cayuga Inlet in Ithaca.

“The history of rowing at Ithaca College includes pride, family, dedication and a commitment to excellence,” Robinson said.