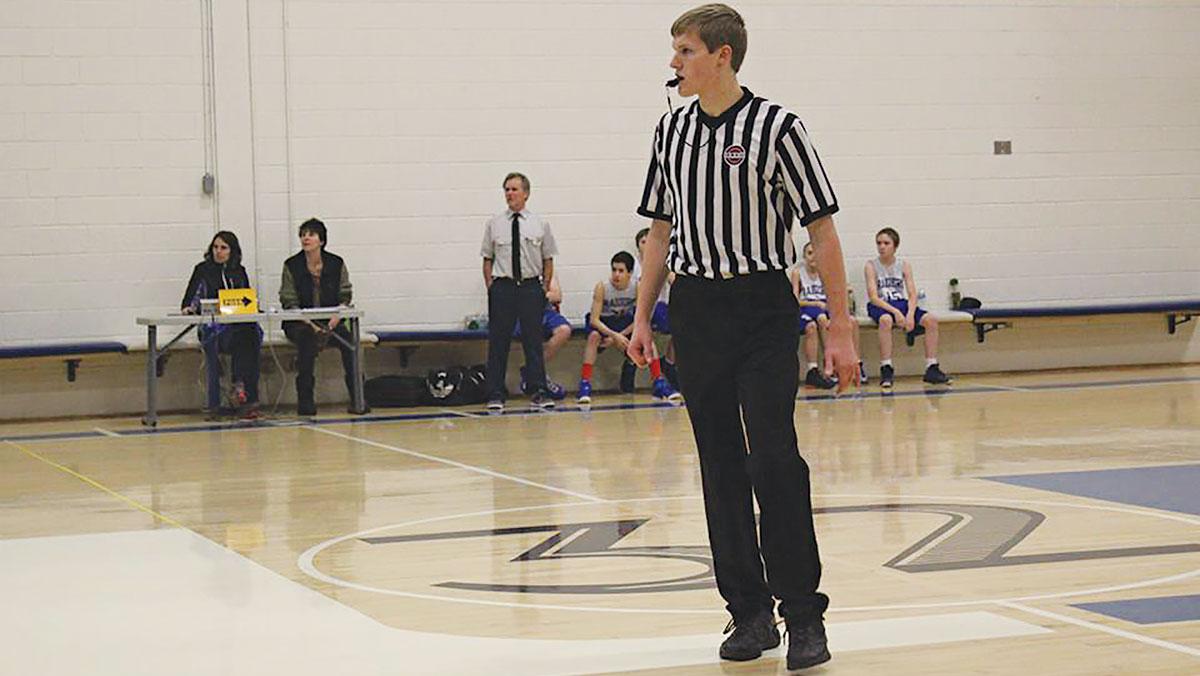 Making sure to keep up with the hustle of the players, junior Clark Stridsberg’s lanky 6-foot 2-inch frame quickly moves up and down the basketball court. With intense concentration and confidence, his eyes are locked on the ball and the competitors’ every move. The sound of the rapid movement of feet resonates across the court, but a whistle blows, and the high-pitched squeaks of shuffling feet pause for a moment.

While Stridsberg may be running across the court, he is not one of the 10 players competing. He is an official. When he’s donning the black-and-white striped shirt, black pants, black shoes and whistle around his neck — the attire that has come to define a basketball referee — his job isn’t to score 3-pointers or block an opposing player’s shot. Instead, he is one part of the triangle of officials maintaining the rules, order and flow of the game.

Stridsberg said he has played basketball since he was a kid, and having an abundance of experience playing the game helped ease the transition from player to official.

“I’ve played basketball every year for as long as I can remember … so that’s the one [sport] I definitely feel the most comfortable reffing, too, because I feel like I have the best understanding of it,” Stridsberg said.

As an official in the Office of Recreational Sports at the college since he was a freshman, Stridsberg has had the opportunity to learn and fine-tune his skills over his college career.

But recently, Stridsberg was able to take his abilities to a higher level of play when he received the opportunity to be an official at the 2015 National Intramural-Recreational Sports Association National Basketball Championships held at North Carolina State University from April 17–19 in Raleigh, North Carolina.

The tournament is made up of 96 club and intramural basketball teams from all over the nation, and Stridsberg is the second Ithaca College student to get the opportunity to officiate at the competition after Becca Lewis ’14 went two years ago. Stridsberg said being an official at the tournament was a tremendous experience because he was able to attend various workshops at the competition, which in turn helped him develop his own skills on the court.

“It’s definitely another level, not only for the participants competing, but for the officials because it’s usually just the top couple officials from the regional tournaments plus some at-large bids,” Stridsberg said. “So, as an official, it was a really good experience because you’re working with a lot of people that really know what they’re doing.”

A sport management major from Berlin Corners, Vermont, Stridsberg came to the college knowing he wanted to work in the sports industry, and he applied to be a referee for intramurals at the beginning of his freshman year. In recent years, however, he has taken on multiple roles in the program. Currently, in addition to being an official, he is a field supervisor and an office assistant for intramurals. Through the program, he has also received the opportunity to be a high school basketball official at nine schools in the Tompkins County area.

Scott Flickinger, former program coordinator of intramurals at the college who is now the assistant manager of Intramural and Club Sports at Boston University, said as a basketball player, Stridsberg came in with prior knowledge of the game, but while that knowledge base is valuable, it did not necessarily help him become a talented official. Rather, he said it was Stridsberg’s commitment to his craft that has made him a strong official over the years.

“Clark has just worked extremely hard in taking a look at plays, analyzing plays as they come to him and then making the right decision with each play, and that comes with experience,” Flickinger said. “With every play he sees, he gets better because he is consistently exposed to those plays. And when that happens Clark’s intelligence and his hard work really shine because as he sees that, he catalogs that so he has that knowledge to fall back on when he sees that again.”

It was at the UMass Amherst tournament that Stridsberg was recognized, as he was ranked as one of the top-two officials at the tournament. At each regional tournament, there is an official’s committee of about a dozen people, made up of mostly graduate assistants and intramural coordinators.

Stridsberg said similar to the elimination style tournament for the teams, referees are also competing to go further, and as an all-tournament official, he received an automatic bid to referee at the national tournament in North Carolina. Stridsberg was one of 50 officials from all over the nation to receive the opportunity.

The NIRSA basketball tournaments are geared toward helping officials, as there is a big commitment to professional development. Flickinger said the tournament serves as an officiating camp of sorts and is an opportunity for Stridsberg to continue refining his skills.

“It’s always nice that he got this opportunity to go to nationals, but the one thing I do want to emphasize is that it’s not about that, and Clark knows that,” Flickinger said. “Clark knows that it is about getting better as an official and doing the game justice by improving his officiating so that everybody that experiences the game he’s working experiences a fair and unbiased game.”

At both the regional and national tournaments, each official has games videotaped with a voice over from one of the clinicians. When this is done, Stridsberg is able to break down the film with the official’s committee clinicians, and the videos are also posted online so he can review them himself.

Similar to how players watch game film, Stridsberg said watching film of himself during the game helps him make adjustments because he is able to take the feedback and incorporate it into his officiating.

Stridsberg said the career development component has been his favorite aspect of participating in the tournaments because it gives him the opportunity to learn and to help other students. He said he enjoys passing on what he’s learned from the tournaments, even if that means telling people about the disagreement that comes from players and coaches.

As seen at all levels of play, referees are often remembered for the calls that they miss, but Stridsberg said he cannot focus on this.

“Whether you’re a [Division I] official or in the pros, you’re still not going to get everything, and even when you do get it right there’s a lot of players and coaches who will still disagree with you,” Stridsberg said. “When I’m telling the current intramural referees, I’m always just like, ‘Don’t get discouraged from that, just do what you’re doing because people always get upset, but you just have to take it in stride.’”

Stridsberg also said being an official for intramurals has actually helped when it comes to avoiding impartiality because many of the players who he officiates are his friends. Additionally, Stridsberg has had to officiate multiple games for the women’s club basketball team this past year, including a regional tournament game, and he said because of his intramurals experience, he has not had to face any problems regarding impartiality.

“Some people might have a problem calling a foul on a friend of theirs, but I think honestly officiating intramurals helped with that because that’s a lot of my friends doing intramurals, and I still have to officiate those games,” Stridsberg said. “In a way, it actually helps because if there is a disagreement, you can talk to them better, you already kind of have a relationship there, so you can explain it to them and they’re usually very understanding whether or not it’s in their favor.”

Chris Thomas, intramurals program coordinator at the college, said it is evident Stridsberg is committed to helping other officials and enjoys taking on a sort of teaching role. Thomas also said now that Stridsberg has progressed to this national tournament, he thinks other intramural officials will try to take that next step as well.

“He’s gone through a lot of the clinics for the national tournaments and through his high school certification, so he knows how to train refs, how to relate to them, give them examples on how to improve their skills as well,” Thomas said. “He is just very hands-on with them, and I’d say he is very good at relaying information to them in a way that they understand.”

Stridsberg, who will be a senior in the fall, said he is planning on officiating at the NIRSA tournament next year, and he hopes other officials at the college will consider it as well.  When it comes to his future, Stridsberg said he certainly wants to continue officiating after college.

“Of course, the higher level, the better when it comes to officiating as far as currently doing high school,” Stridsberg said. “Eventually I’d like to move on, hopefully do college games at some point, whether that’s DI or DIII here at Ithaca. But there’s always a higher level to strive for in the field.”