Junior Aileen Razey greets each one of her students with a welcoming smile and a gracious pat on the back. When it’s time to begin class, she gathers everyone around the edge of the pool and states the four guidelines to her class.

“First, drink water even though you’re surrounded by it,” she says. “Second, listen to your body. If you need to get out of the water and be done, that’s fine. Third, yell and scream in good ways. And fourth, if you’re not having fun, then something is wrong.”

After Razey finishes her introductions, the students smile and head for the pool, which to some might seem like an unlikely place to dance. Not tonight. As the auto-tuned music blasts from Razey’s iPod through the speakers, she leaps in the air and throws her arms to the side. Go time.

Founded in 2001, Zumba is a Latin dance-inspired cardiovascular exercise program that focuses on developing muscles in the arms, thighs and chest. Aqua Zumba, what this group is participating in,  takes a spin on that program and applies it under water. Instructors on the deck lead their students in hip twists and leg shakes to build endurance and strength.

Each class at Ithaca College consists of an average of 30 participants who get a full-body workout in 45 minutes. Razey holds classes from 8:30 to 9:15 p.m. Wednesdays and sophomore Andrew Walker leads workouts from 5 to 5:45 p.m. Sundays.

Razey said many students have incorrect perceptions of Aqua Zumba.

“A lot of people think, ‘It’s like aqua aerobics, my grandma does that,’ but it’s so much different,” she said. “Grandma doesn’t do Aqua Zumba, and if she does, she is awesome.”

With more than 100,000 classes offered across the nation, Aqua Zumba has become a popular fitness routine. Walker said the craze surrounding the workout  has caught on at the college because of the cheery environment it creates.

“It’s become so popular because there’s nothing like it,” Walker said. “What Zumba did for the first time was take fitness and make it a party.”

Aqua Zumba provides an exercise environment that firms and tones muscles through resistance. Razey said Aqua Zumba participants receive a rigorous exercise regimen from the class because of the unique properties of water.

“It’s a great core workout because you’re constantly having to fight the
water,” she said. “And also because you don’t have gravity in the water, your limbs are going to automatically fly up, so you have to do a lot of pushing down.” 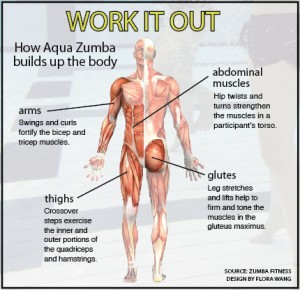 Walker said his reason for becoming an Aqua Zumba instructor was to make the exercise more fun and intense than traditional aqua exercises.

“I was really interested in seeing what water-based fitness has to offer younger audiences,” he said. “And I’m like, ‘How can I take something that is for senior citizens normally and make it fun and exciting for kids my own age?’”

“A lot of people are afraid to take land Zumba because it’s dancing,” she said. “But when they get in the water, it’s kind of a comfort blanket.”

“I haven’t done the regular Zumba in awhile, but I think Aqua Zumba is better because it’s harder,” she said.

As the class reaches its halfway point, the signs of the workout begin to show. Participants’ motions are less exaggerated and precise. Nevertheless, they continue smiling along with their instructor.

Senior Michele Fortier, a regular participant in the weekly Aqua Zumba classes, said the instructors’ attitudes motivate her to continue throughout the entire workout.

“Aileen and Andrew are so enthusiastic, and it’s so much fun just being part of it,” Fortier said. “They’re really high-energy and get us to cheer and sing along. It just makes us want to be silly and get rid of our inhibitions.”

Razey said she makes a conscious effort to keep the students engaged and entertained during the entire class.

“When we try a different move, I get their attention with a lot of hand
motions,” she said. “But also a lot of yelling, laughing and playing around to make them smile and make them laugh.”

Walker said his energy leads to less tense and more willing participants who forget about the strenuous activity they’re putting their bodies through.

“It’s all about making them feel comfortable,” he said. “And if they get a chance to laugh about something, they’re going to forget what’s going on and forget that they’re here to exercise.”

Razey, who is also a resident assistant on campus, said she has run Aqua Zumba classes for her residents to help them get to know one another.

Walker said the communal aspect of Aqua Zumba makes it more enjoyable than other fitness classes.

“The more friends you have, the more fun it can be because you’re comfortable,” he said. “It makes a good event for people because it’s fun and you get to work out. So it’s the best of both worlds.”