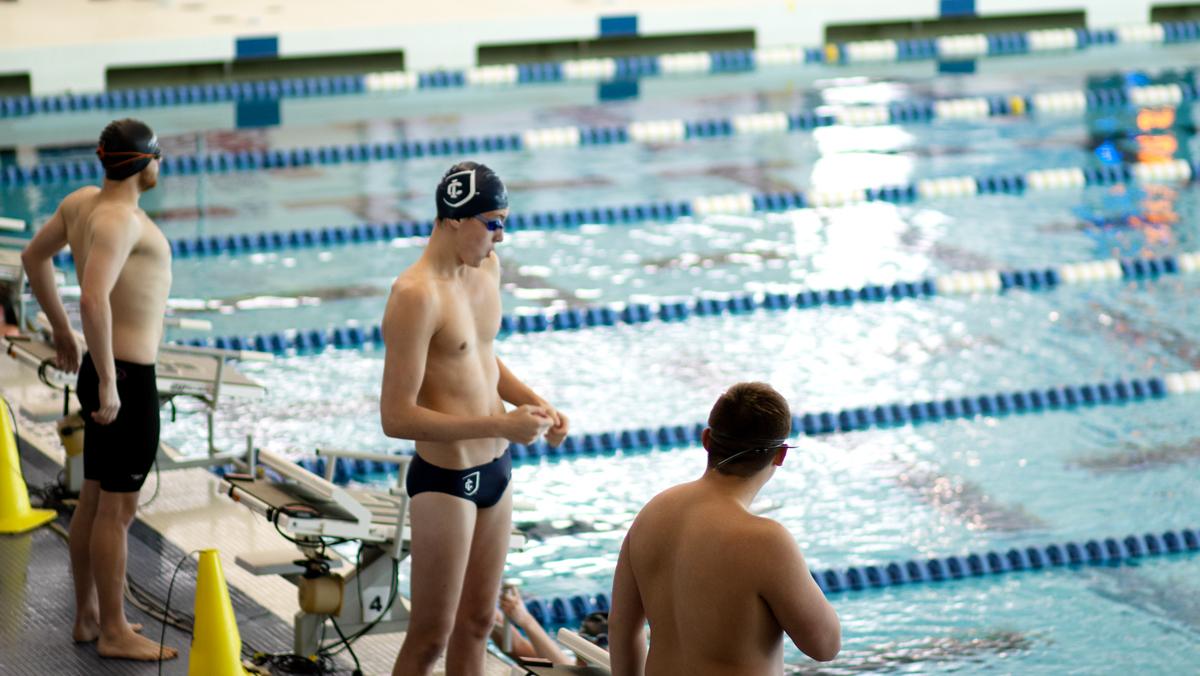 Jackie Marusiak/The Ithacan
Three swimmers look toward the pool before their race at the Senior Day meet against Alfred University on Jan. 26. The Bombers added 12 freshman to their roster this season.
By Emily Adams — Assistant Sports Editor
Published: January 29, 2019

When Kevin Markwardt, head coach of men’s swimming, began recruiting incoming freshman for the Class of 2022 his goal was simple — bring in as many quality swimmers as possible.

This was his focus because, during the 2017–18 season, the Bombers only had 19 athletes on their roster. However, the 2018–19 roster for the Blue and Gold has grown significantly and now consists of 28 athletes. The 12 new freshmen are the reason for the massive jump in participation. Markwardt, who is in his 38th season with the program, said this year’s freshmen make up one of the largest classes the program has ever had.

The new freshman class has added more to the team than simply being present. Freshman Spencer Brownewell has been named the Liberty League Conference Rookie of the Week twice, and multiple other freshmen have had top-five finishes during the season so far.

Markwardt said the 2017–18 season was the first time the team has ever had fewer than 20 athletes on its roster during his tenure. This was largely due to a wave of athletes who decided to leave the sport. Notably, the team lost then-junior Aaron Levin, a top sprint freestyle swimmer, and then-sophomore Matt Quinney, who competed in the individual medley, breaststroke and backstroke. Markwardt said athletes will quit the team for a variety of reasons, which can include injuries, pursuing other activities or a lack of passion for the sport.

“I think there’s just more opportunities now than there were five or 10 years ago,” Markwardt said. “When kids question themselves, I always say, ‘Is there something you’re going to that you want to do more, or are you just not willing to stand up to the challenge?’”

In order to combat these losses, the team expanded its recruiting process to acquire the current freshman class, Markwardt said.

“Before, I would do the recruiting all myself, but I learned you have to use your staff,” he said. “We try to get everyone involved in the recruiting process so that one person can work with the database, another can make calls, Chris [Griffin] does a lot of the social media stuff. It’s become broader, and we’ve figured out our responsibilities.”

Markwardt also noted the difficulties that recruiting at the Division III level presents. Because he is unable to offer scholarships, he needs to impress students with other aspects of the program, and with the college in general.

“The school is what you have to sell,” Markwardt said. “The first thing I do is look at majors. If we have majors that connect well, I’m going to really push hard for those kids. And then, of course, our facility helps. In the last 10 years, I get a whole different level of recruit than I’ve ever got. Their jaws drop when they see this facility because its a Division I facility.”

The culture of the team itself is also important in attracting recruits. Brownewell said that the high caliber of competition and opportunity for development on the college’s team drew him to the program during the recruiting process.

“I was looking at the roster and saw a lot of strong juniors [who are] now seniors, and there’s a lot of other promising kids on the team that are coming up,” Brownewell said. “The team definitely has a lot of room for growth, which was my biggest factor. You never want to be on a team that’s just going to be good for now and eventually top off.”

Freshman AJ Bances walked on to the college’s swim team, despite being recruited by other colleges. He believed that the program’s competitive atmosphere would push him farther than the teams who actively sought him out.

“I got recruited at other schools, but I wasn’t getting recruited here,” Bances said. “When I had a meeting with Kev[in] [Markwardt], he told me, basically, that you can go to a school that recruited you, but it’s not gonna be as good as if you come here. He said if you come here now, you have to work hard and prove yourself to be with everyone else.”

The large freshman class has already proven to be an asset to the Bombers’ squad. Markwardt said the depth they provide has been an advantage for the team in meets this season.

“The more bodies you have, the more resources you have to pull from,” he said. “There were kids who I didn’t think were gonna contribute but have really surprised me. We’re a little weaker on the top end, but our depth has really allowed us to be where we are in terms of our record.”

Brownewell believes his class has inspired a greater passion and work ethic among the rest of the squad.

“All of the older kids see the potential we have and how hard we’re working,” Brownewell said. “That lights a fire under them because they don’t want to be taken over by these young freshmen. You can see it spread throughout the team, which is really good, because now everyone’s getting pushed in practice.”

The size of the class also allows for diverse strengths among the athletes. Bances pointed out how each of the freshmen has stepped up to fill their own role on the team.

“I’m a walk-on, so I don’t carry a lot of points, but I try to take on more of a leadership role, but guys like Spencer [Brownewell] and Michael [Sheehan] and Matt Crysler contribute a ton of points to the team. I think having the leadership aspect with the fast swimming and the energy has created a great dynamic.”