When junior high jumper Estelle Yedynak had her first official track and field practice of the season Oct. 22, she was surrounded by a group of eager freshmen jumpers who were watching her every move. The season before, she was practicing alone.

Yedynak was the only high-jump specialist for the Bombers during her sophomore season. She would occasionally practice with the men’s team, but she spent the majority of her practices working in one-on-one sessions with assistant coach Mary Wallenbeck, who focuses primarily on jumps.

Yedynak took full advantage of her personalized practice time. She finished outside of the top five at meets only twice during her sophomore season. One of these times came during the NCAA Division III Indoor Track and Field Championships, where she took tenth among the best high jumpers Division III offers.

This season, she has been joined by four freshmen high jumpers: Riley Brunner, Susie Foley, Grace Merchant and Gabrielle Schlessinger. The freshmen have found success as well this season, with Merchant earning four top-five finishes. She shares a personal record with Foley of 1.60 meters. Yedynak, whose best height this season has been 1.65 meters, said that the training group has motivated her to push herself further in practice.

“Last year I was the only high jumper,” Yedynak said. “It was great because you get that one-on-one training. Having new teammates and freshmen and overall talent come in is awesome and makes me push my competitive edge a little bit.”

Yedynak has continued to dominate this season. She has only one sub top-five finish this season, which came at the John Thomas Terrier Classic at Boston University, a meet attended by many Division I athletes, including 15 who finished ahead of her. Yedynak said the coaching staff at the college holds the Blue and Gold to the standard of Division I athletes, so entering meets that have had Division I jumpers — like the five this winter — is less intimidating than it seems.

“We compete against amazing teams all the time,” Yedynak said. “Whether you are at a Division III level or Division I level, I don’t think that there is that much of a discrepancy between the two. We are held to a high standard by our coaches and everyone else in our program, and because our coaches hold us to that standard 100 percent of the time, going into those big meets, we have a high standard embedded into our brains.”

Yedynak has added more to her repertoire than just new teammates. She has also began to run in track events. She has competed in the 200-meter dash twice this season and the 4×200-meter relay once. Wallenbeck said that, although she hadn’t run on the track since high school, having Yedynak compete in another event during a meet can relieve some of the stress that may be caused by solely focusing on the high jump. 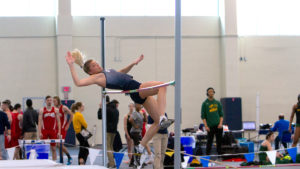 Yedynak placed 10th at the Indoor National Championships in 2017-18

“I truly believe she really needs to get on the track now to strengthen her as a person,” Wallenbeck said. “I think it’s going to really help her with high jump because when all you have to focus on is high jump, it can become too mental.”

While Yedynak had not competed in the 200-meter dash since high school, Wallenbeck said that Yedynak has consistently performed well on the track during practice, and she felt that she could benefit the team.

Yedynak said she has enjoyed the flexibility with practices that the team offers, as she is able to train at her own pace and still receive some personal attention, despite having a larger training group.

“Coach Mary tries to individualize practice a bit,” Yedynak said. “We have specific jumps times throughout the day, so whether you come at 1 o’clock, 2 o’clock, 3 o’clock or 4 o’clock, you are set in a smaller jumps group. I don’t know if a lot of other schools offer those times throughout the day where you can come in and have a jumping group of three or four girls or guys and compete.”

Merchant said having Yedynak as a teammate has taught her a lot about how to find success. She said that she and the other freshmen often try to emulate how Yedynak goes about her routine in the hopes that it will allow them to emulate her success as well.

Junior sprinter Amanda Wetmore said that, although she does not compete in the same events as Yedynak, Yedynak’s ability to concentrate on the task at hand sets her apart from her competitors.

“I value Yedynak’s ability to focus,” Wetmore said. “Whether she’s at lift, practice or a meet, she forgets about everything else, concentrates and gives it her all.”

Off of the track, Yedynak said one of the best experiences she has had at the college is her involvement with the Leadership Academy.

“We are actually the only Division III school in the nation to hold a leadership academy,” Yedynak said. “It’s something that builds leadership roles on a team, but also in the workplace later on. We talk about confidence and composure and meet around once a month. It’s a really awesome program that we have had the opportunity to partake in.”

The Leadership Academy is run by Greg Shelley, associate professor in the Department of Exercise and Sport Sciences. The program currently serves more than 300 student-athletes and 40 coaches each year. Wallenbeck said the program has been extremely beneficial in Yedynak’s development as a leader.

“The academy has been really good for many people, but I think especially for Estelle,” Wallenbeck said. “She came in a very social person, and, now, she is able to utilize that structure that they have given her, and she uses them. She leads by example on the track every day. You will see her finish the high jump and then cheer on her teammates in other events. She has taken each step, and you can see her growing with each step.”

Merchant has also noticed Yedynak’s leadership qualities during her time at the college. She said Yedynak was crucial in helping her assimilate into college life.

Yedynak said her positive experiences on the track and field team have helped her develop close bonds with her teammates and have created a positive atmosphere for her college experience.

“We do more than just practice and compete,” Yedynak said. “We volunteer around the community, we attend sports psychology to better our holistic and mental health in preparation of competitions, we have team dinners, game nights, and cheer each other on throughout team lifts and max testing.” 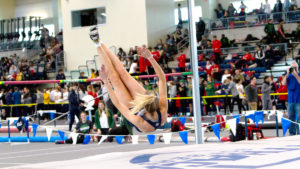 Yedynak was the only high-jumper last season, but has been joined by four freshman.

She said her experience as a Bomber involves much more than just competing. She has embraced the lifestyle and will continue to represent the Blue and Gold wherever life takes her.

“Being a Bomber is so much more than putting a uniform on,” Yedynak said. “It’s everything that goes on behind the scenes, the trust, and the journey, and the process, that makes putting our jerseys on so special.”

As for the rest of this season, she said she hopes to return to nationals and build off of her 10th-place finish. Currently, she is ranked 13th in Division III. Wetmore believes that if Yedynak continues to train at a high level, her ceiling will be high.

“I believe the sky is the limit with Estelle,” Wetmore said. “She can do whatever she sets her mind to.”