Looking to turn the tide in conference play 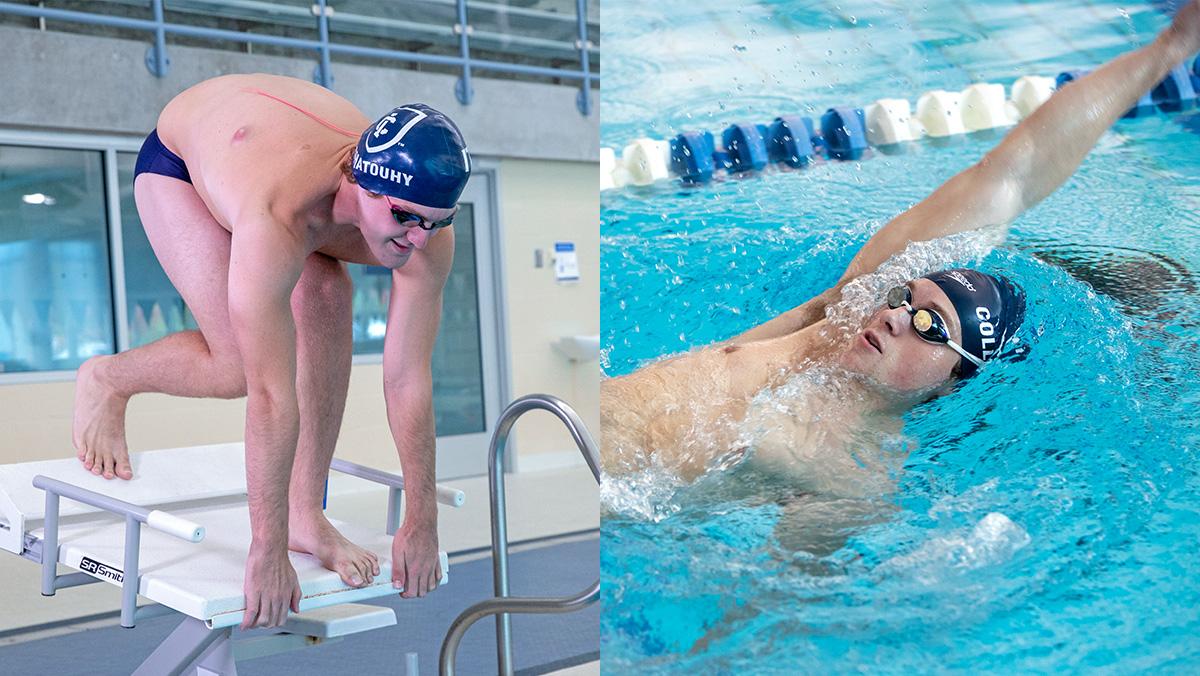 Kalysta Donaghy-Robinson/The Ithacan
From left, junior Holden Shatoughy and junior James Collishaw will look to help the Bombers bring home their first Liberty League championship since the school joined the league back in 2018.
By David Schurter — Staff Writer
Published: November 9, 2022

After finishing second at the Liberty League Championship last season behind the Rochester Institute of Technology (RIT), the Ithaca College men’s swimming and diving team made its long awaited return to the pool Oct. 15, ready to begin a new season.

Head coach Kevin Markwardt said that he wants to take the season one day at a time, working on improving the team rather than overthinking the next opponent.

“I’m focused more on the process,” Markwardt said. “Day to day, what we’re doing in practice, maintaining a healthy team environment, you want to work with the individuals first.”

Associate head coach Mike Blakely-Armitage said the coaching staff meets with the team individually to discuss the season as well as assist with personal goals and help the athletes reach their full potential.

“One of our biggest goals is to continue to establish a true team culture,” Blakely-Armitage said. “The guys care about their interactions with coaches and want to maintain strong relationships with us.”

Markwardt also said that the team is looking to be more competitive within the Liberty League after falling just short of the conference title last year.

“Last season we lost one dual meet, a tight one to RIT,” Markwardt said. “Guys are going to have to step up in order to win the conference championship.”

One of the athletes looking to step up this season is junior captain and freestyle swimmer James Collishaw. Collishaw, the 2021 Liberty League Rookie of the Year, said he is looking to build off a strong 2022 season in which he participated in the 400- and 800-meter freestyle relays at the 2022 Division III National Championships at Indiana University from March 16–19.

“I was happy with how I performed last season,” Collishaw said. “I would like to make it back to Nationals with a couple of teammates, hopefully send some relays.”

Being one of the older students, Collishaw said he is also looking forward to taking on a larger role as a leader on the team, even though he has just one year of competition under his belt — he did not swim in the 2020–21 campaign because of COVID-19 restrictions preventing competition.

“Enforcing the values we want to see in our team and not letting anyone set any bad habits early is important,” Collishaw said. “Along with myself, having all the other upperclassmen being role models is huge, especially in helping all the [first-year students] develop into stars over the next few years.”

Along with Collishaw, senior captain and freestyle swimmer Holden Shatouhy said he is excited for the new season, as he missed the chance of competing at Liberty Leagues last season because of an injury.

“This season I hope to make it back to the Liberty League podium in the mile and 400 IM [Individual Medley], as I was injured last year,” Shatouhy said. “This is going to be the first season that is not affected by COVID[-19] in any way, which is exciting.”

Shatouhy said that this season is going to look much different than years past, as the team energy has changed since his first year.

“We want to be the fastest team, but we also want to make sure everyone is happy and wants to be here,” Shatouhy said. “Working on our technique and holding each other accountable is a huge reason for our major shift in recent years.”

This year will be especially different, as the team will be relying on a heavy underclassmen squad to keep the momentum going, with a total of 24 first-year and sophomore students.

“We just had a really talented class graduate,” Markwardt said. “We don’t have everyone back, but we have enough guys and potentially a very strong [first-year student] group. We have the potential to have as good a team as we’ve had in recent years.”

“[Cooke] really impresses me with his attitude as a [first-year student],” Blakely-Armitage said. “[Janssen] will be a really good breaststroker, and transfer [Mitros] will really help our sprints squad.”

Cooke, Jansen, Mitros and the rest of the new swimmers will join a strong group of sophomores and juniors returning after an impressive showing last season, with a record of 8–1. That group includes sophomores freestyle swimmer Matthew Stevens, who finished second in the mile swim at the Liberty League Championship last year; butterfly swimmer Santiago Ludwig; and sprinter Ben Young, who was a part of the 400– and 800–meter relays at Nationals.

“[Stevens] is a guy I look to meet after meet as he swam really well in the distance events last year,” Markwardt said. “[Ludwig] is in the top three in the middle–distance department, and [Young], who came out strong as a [first-year student], is really going to help our relay squad as well as in the middle distance events with his capabilities.”

Going into his final season, Shatouhy said that he wants to make the most out of this season, as this is his last chance to help the team win its first Liberty League Championship.

“I’m really excited for this season, as I feel that there’s nothing to lose,” Shatouhy said. “It’s all over in February, so I just want to do the best I can because it’s all over after this.”

The team opened the season Oct. 15 with big wins over Buffalo State College, Fredonia College and Hobart College but dropped a dual meet 148–146 against Rensselaer Polytechnic Institute on Oct. 29. The next competition is against the defending Liberty League champions, the RIT Tigers, on Nov. 18.