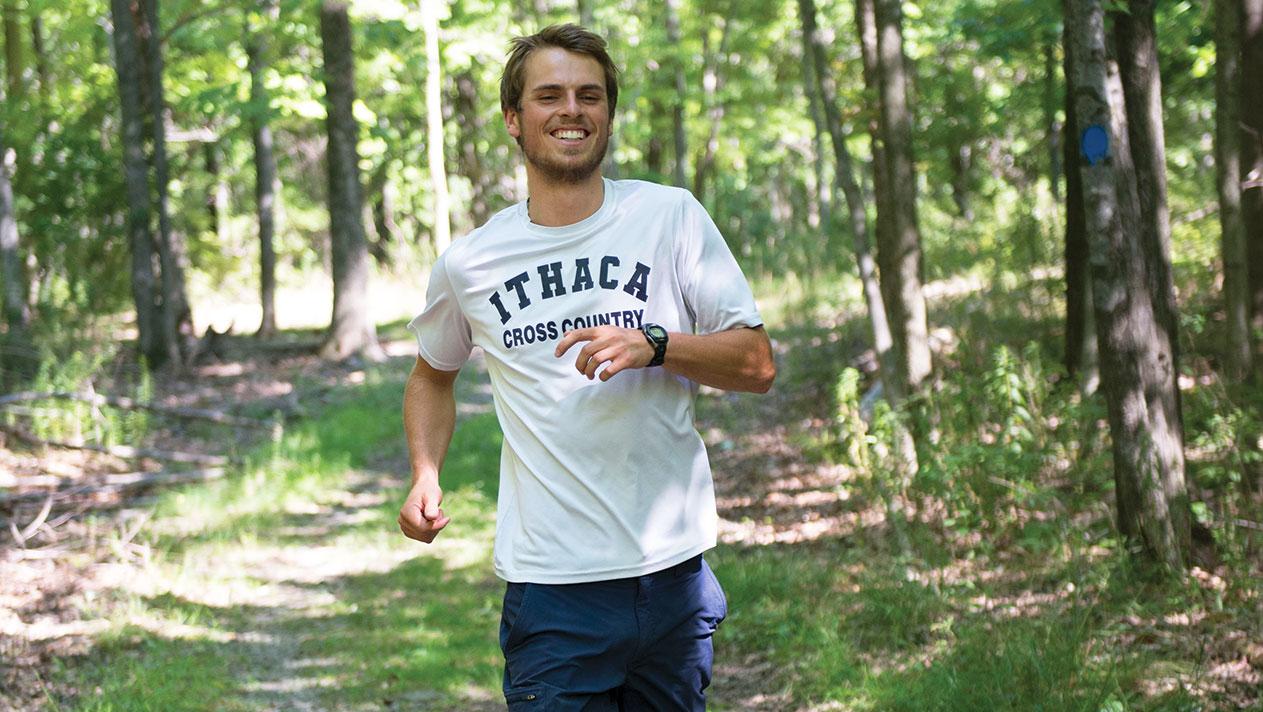 Through the opening miles of the 8K race at last year’s Empire 8 Conference championship, Sawyer Hitchcock ’16 came out ahead of a large pack of runners and continued all the way to a first–place finish. Junior Tim Chappell and senior Sean Phillips overtook the second– and third–place positions in the final mile and rode that momentum to the finish line. With that, the Ithaca College men’s cross-country team captured the Empire 8 title for the sixth consecutive year, and Chappell said it was one of the greatest moments of his cross-country career.

Though winning the conference championship is a significant achievement, many of the upperclassman runners agreed that earning a bid to compete in the NCAA Championships in 2016 is the team’s primary focus.

The Blue and Gold improved on their ninth-place finish at the NCAA Atlantic Region Championship in 2014 with a fourth-place finish in 2015. However, they fell just shy of qualifying as a team for the nationals, which Phillips said was disappointing.

“Last year, our team was pretty much the first team that missed the cut for nationals,” Phillips said. “And that’s probably one of the worst feelings. … So I think a lot of us feel that and are fueled on that to try to give it everything we have this year to make it back.”

The Bombers will have nine freshmen runners entering the season, which will almost outnumber the current roster of 10.

With an already–experienced roster at the helm, as well as one of the biggest recruiting classes in recent memory, the Blue and Gold hope for success in 2016.

All four seniors vastly improved on their average times from last season in the 8K, with senior Jesse Capellaro improving the most by shaving approximately 40 seconds off his average between 2014 and last season.

The Bombers have not qualified or earned a bid to nationals as a team since 2002. Senior Chris Gutierrez said everyone will need to pull their weight if the college wants to be recognized as a national championship contender.

“We need the fourth, fifth, sixth, seventh runners to step up,” Gutierrez said. “We don’t really have a clear idea of who those runners are going to be. A lot of people who aren’t top–three need to pick it up, and that will determine where we finish, I think.”

The underclassman bunch is headlined by sophomore Owen Memelo, who led the freshmen last season with an average time of 28:06.24 in the 8K. He said he wants to become a role model for the incoming freshmen this season.

“I want to do what the upperclassmen did for my freshman year — just set a good example by working hard every day in practice and not taking it too serious,” Memelo said. “I want to be able to joke and goof off with the guys and just have a good time with them because that’s really what it’s all about.”

Head coach Jim Nichols said all that is left is managing the pressure of competing at regionals. The team’s performance at regionals determines whether it will get to compete in the national championship.

Nichols said he believes this year’s squad has what it takes to handle the duress.

“I think anybody has done that as a runner through their whole high school career,” Nichols said. “These guys did well in their junior and sophomore year. They competed well last year at the regionals. I expect our upperclassmen to have another outstanding season.”

Senior cross-country runner distances himself from the pack