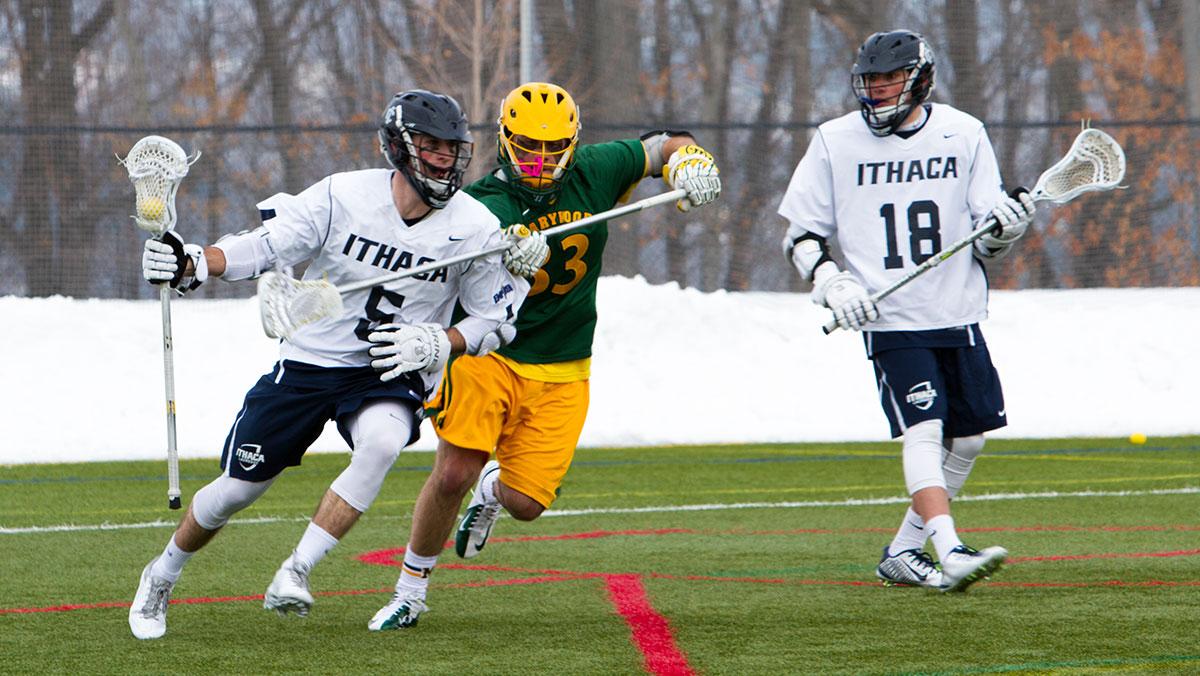 When most people think of spring, they think of warmth, flowers and sunshine. When the men’s lacrosse team thinks of spring, they relate it to something completely different: snow. While it’s normal for the college’s spring athletes to experience some hardships regarding the bitter cold and accumulating snow, this year has been significantly different — and significantly worse.

Despite this being one of the coldest Februarys Ithaca has experienced in years, the men’s lacrosse team is not intimidated by it. In fact, the adversity that has been thrown its way this season has only contributed to their toughened mentality and character.

Higgins Stadium is home to the Bombers, but this year, the Athletics and Events Center has temporarily replaced their home, more so than in years past. This is due to the incredible amount of snow that has continued to pile up on South Hill and the freezing temperatures, which seem to often drop below zero. Because of this, it has been increasingly difficult for the team to consistently practice outdoors.

Head coach Jeff Long said this season has been tougher than usual on the team compared to past seasons.

“This is, by far, one of the coldest winters in a long time,” Long said. “We have practiced indoors more so than in the past. We typically experience a few warm days thrown in there, but it’s been consistently cold the entire month without any real reprieve.”

To deal with the difficult weather conditions, Long said he has moderated the outdoor practice schedule, with shorter, full-field practices and faster-paced drills to keep the players moving.

“They handle it very well,” he said. “There’s very little to no complaining [about the weather] that I ever hear. It is what it is. They embrace the challenge, and we are getting things done, just at a slower pace.”

Senior midfielder Matt Greenblatt said another difficulty in practicing outdoors are hidden ice patches. The icy fields are very dangerous to the athletes’ health and safety, as they become increasingly vulnerable to sprained ankles and potential knee injuries.

“It’s definitely been tough, but the worst part would have to be finding icy spots on the turf and slipping while you’re trying to play,” Greenblatt said. “Cleats are pretty much useless right now. Out of my four years, this has definitely been the worst.”

However, despite these challenges, the South Hill squad does its best to get outside on the field as much as possible — even if that means shoveling the field prior to practice. To many, shoveling seems like a daunting pre-practice task, but senior attacker James Manilla views it as an advantage.

“Shoveling the field is not as bad as some may think,” Manilla said. “For me, I look at it as another way to warm up before I go out to practice. It usually takes about 45 minutes, and after you do, you feel loose and ready to play.”

Besides pushing one another to work hard, Greenblatt said the team routinely plays music in the locker room before practice to get them mentally ready and stresses the need for improvement.

“Each day, we remind the team that we need to improve, so let’s make the most of that time we have on the turf and not waste it away complaining about this or that,” he said. “The truth is no matter how much you complain, it’s not making the temperature any higher.”

Manilla said the weather has helped the team to build character by staying focused and positive, especially in such difficult conditions.

“It’s just more adversity for us,” he said. “When you can battle through adversity, that’s a great sign, because it’s a trait that a lot of successful teams have. Practicing in the cold and snow builds character and prepares us for anything. We look at it as another challenge and another way to go out and compete in the elements.”

Meanwhile, Greenblatt said he has a different reason as to how he remains focused and motivated through the challenging weather conditions.

“For me, it’s pretty easy knowing that as a senior, each practice is a day of lacrosse I will never get back, so I have to make the most of it,” Greenblatt said. “You need to control the controllable, which is how you play and how hard you are willing to go for this team.”

Over the next couple of weeks, the Bombers will face a series of competitive matchups. After the cancelled game Feb. 25 against SUNY Oswego, the Blue and Gold have been preparing for their tough lineup of upcoming opponents, including Rochester Institute of Technology, Lycoming College and Houghton College.

Although Long said he was disappointed to miss out on last week’s game, he considers it an opportunity to get better.

“It’s always tough to lose a game [in the schedule], especially when the team is as young as this team is,” Long said. “But it also gives us an extra day of practice to get ready for the next one.”

The Bombers will next compete against the Houghton Highlanders on March 7 before facing off against The University of Tampa and Salve Regina University during their spring break trip to Florida.

Long said the trip will be a learning experience, as well as a nice escape from the snow.

“The Tampa trip is a business trip, first and foremost,” he said. “Since we are a little behind due to the weather, we will continue to train as if it’s preseason — getting some teaching in and continuing to improve. It’ll be so sweet to practice and compete in shorts and feel a little sun.”