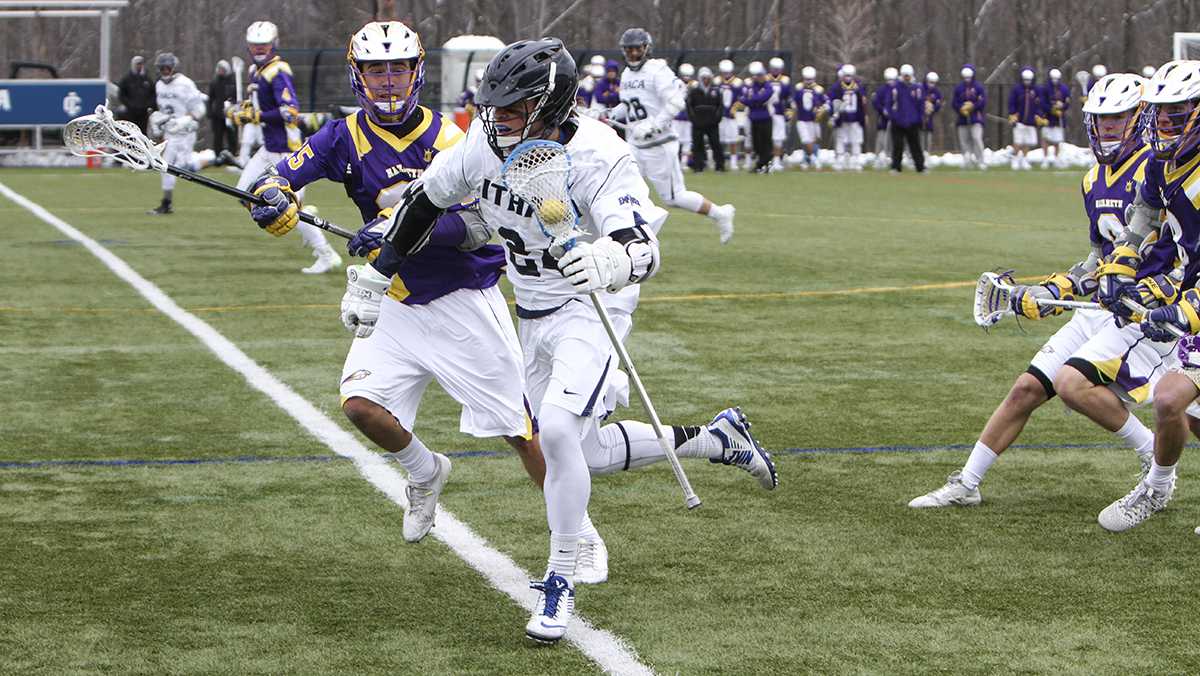 Coming off of a crucial conference win against then-No. 16-ranked Stevens Institute of Technology, the current No. 16–ranked Ithaca College men’s lacrosse team took down No. 11–ranked Nazareth College on April 9 at Higgins Stadium by a score of 19–5. The Bombers have won eight consecutive games and improved their record to 10–1 this season and 3–0 in the Empire 8 Conference.

It was Senior Day for the men’s lacrosse team, and the four seniors on the team, midfielder Michael Walker, long-stick midfielder Andrew Dietz, defenseman Eli Gobrecht and goalkeeper Scott Sidnam, who are all captains, were honored for their Bomber careers before the game.

Gobrecht said winning on Senior Day is important because of the emotion the game creates and how many people come out to support them on this day.

“We lost on Senior Day my sophomore year, and we felt really disappointed, and it was something we never wanted to feel again,” Gobrecht said.

Head coach Jeff Long said his seniors have been a pleasure to coach for the past four years.

“They’re no-maintenance guys. They lead by example and aren’t afraid to push their teammates,” Long said.

Once the game started, the South Hill squad took a 6–2 lead after the first 15 minutes. Junior captain attackman John Januszkiewicz netted two of his team-leading five goals in the first quarter and sophomore midfielder Greg Drillock scored two of his three goals in the first. Sophomore attackman Paul Walter and sophomore midfielder Jason Partridge scored the first two goals for the Golden Flyers.

The Blue and Gold extended their lead to eight by halftime, drilling five more goals while only allowing one in the second quarter. Junior midfielder Hunter Burdick netted the lone goal of the quarter for the Golden Flyers.

Defense was practically unstoppable in the third quarter as only three goals were scored in total. The first goal of the half did not come until six minutes and 11 seconds had passed when Januszkiewicz ended the scoring drought by netting his third goal. Two and a half minutes later, junior attackman Joe Eiskant of Nazareth scored his team’s fourth goal of the game. With 55 seconds remaining in the third quarter, Walker scored his fourth goal of the game to give the Bombers the 13–4 lead.

The Bombers outscored the Golden Flyers 6–1 in the fourth quarter as Januszkiewicz scored two more goals along with one each from Drillock, sophomore attackman Jake Cotton and junior attackman Jack Shumway. Eiskant netted his second of the game for Nazareth as the Bombers powered on to the 19–5 victory.

Long said the team’s defense was the key to the team’s success in this game.

“I personally think Nazareth has one of the top offenses in the country, and our guys were able to slow them down for all 60 minutes,” Long said.

The Bombers will take the field next on at 4 p.m. April 13 in Rochester, N.Y. against St. John Fisher College.