Men’s Soccer: Blue and Gold extend unbeaten streak to seven with draw vs. University of Scranton 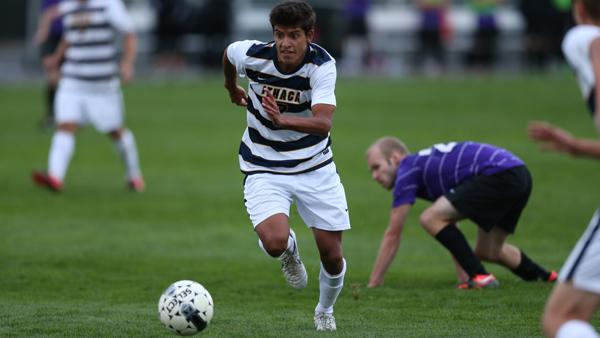 The men’s soccer team extended its unbeaten streak to seven after a 0-0 draw with the University of Scranton on Tuesday on Carp Wood Field. The Bombers improved to a 3–1–4 overall record, while the Royals (7–0–1) recorded their first tie of the season.

The majority of the game was played in the midfield, as both teams were strong defensively. Scranton outshot Ithaca 16-11, but the Bombers’ freshman goalkeeper Kenny Chapman earned the first solo shutout of his career with six saves.

Freshman defender Joey Dobbins went down late in the first half with an injury and would not come back for the rest of the match. Sophomore Casey Williamson took over the left back position and helped the team to its fourth shutout this fall. Williamson said he has experience in being called upon when needed.

“Getting into that mindset of, ‘if someone goes down then that’s me who has to step in and fill whatever role,’ is something I’ve been kind of working on for at least this year,” Williamson said.

Though Williamson is more of an offensive player, he said he has been able to adjust to defense because of his experience in the midfield.

“If you just take things that you do in midfield and then add a little defensive aspect to that, it’s not too hard,” Williamson said. “There were times when I wasn’t sure when to go [up the field] type of stuff, but those are just growing pains really. Hopefully [Dobbins] has a speedy recovery, and while he’s out I’ll try to fill in for him.”

The Bombers were able to create some scoring opportunities late in the final minutes of the second overtime period. Sophomore midfielder Tim Goldman ripped a shot on target near the edge of the box before it deflected off a defender. This forced Scranton senior goalkeeper James Dillon to make an incredible save to force a corner.  Sophomore midfielder A.J. Wolfanger was able to get one final shot off from the ensuing corner kick, but it went wide of the net.

Tuesday’s contest marked the fourth consecutive game in which the Bombers went into overtime. Freshman center back Jordan Filipowich said the team will look to improve offensively to help avoid playing more than 90 minutes a game again.

“It’s kind of bittersweet that we get the tie, but still with the overtime it’s exhausting and we want to just finish in regulation time,” Filipowich said. “We’re going to try to push harder in the first 90 minutes, especially in the first half.”

Senior midfielder Jack Shirley said the advantage of playing multiple overtime periods is that the team will be prepared for any situation later on in the season.

“It’s kind of benefiting us in a way in that when we get into those hard conference games later in the season,  if we’re in overtime,  we’re experienced,” Shirley said. “We’ve been playing 110 minutes for the whole year, so we’re going to be ready for that.”

The South Hill squad will look to score early Saturday when it hosts Empire 8 Conference opponent Alfred University on Carp Wood Field. The game will kick off at 1 p.m.