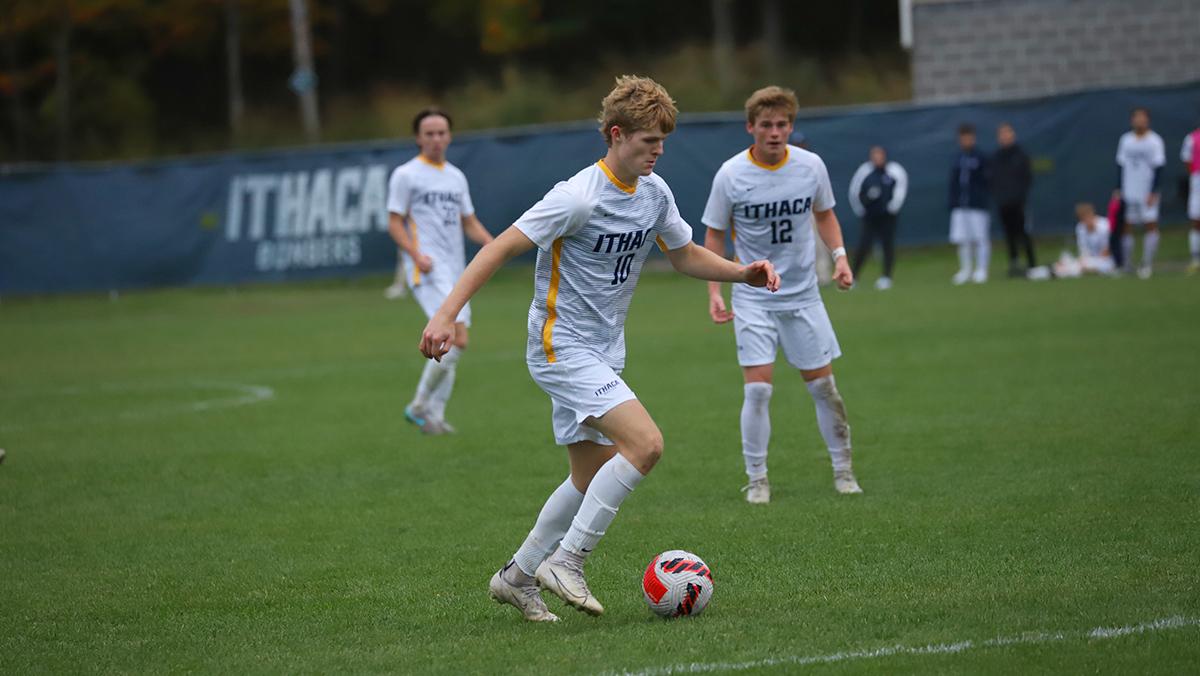 The Ithaca College men’s soccer team exploded for three goals in a 3–1 win over the Union College Dutchmen on Oct. 15 to improve to 3–6–5 on the season and 2–1–3 in Liberty League play.

For the first time all season, the Bombers managed to net multiple goals in one game, and it paid dividends for a team that has played well defensively but struggled to score. The game between the rivals started chippy from the beginning and did not slow down as the game went on.

In just the ninth minute, Dutchman senior midfielder Evan Farr earned an early yellow card. The Bombers earned a free kick, which was sent in well by senior defender Brendan Lebitsch, but the Dutchmen cleared it away quickly.

In the 12th minute, senior midfielder Jack McCarthy received a cross from junior midfielder Reefe Harrison and fired the ball into the top corner of the net to give the Bombers a lead that they would not relinquish.

The South Hill squad did not take its foot off the gas, though, despite the early lead, instead looking for a cushion to solidify the game before the half. They would find it in the 23rd minute, when Union junior goalkeeper Sean Speck punched the ball out after a free kick, but sent it straight to the Bombers’ sophomore midfielder Connor Tierney, who tapped it in for a 2–0 lead.

Head coach Garret Eldridge said the first 30 minutes was the best he has seen his team play all year. Even though the scoring would slow down, it was a good showing for the athletes.

“[McCarthy and Tierney] have been so good all year,” Eldridge said. “So, really deserving from them. And I thought for the first 45 minutes we were fantastic.”

If not for a costly error in the 35th minute by graduate student midfielder Kyle Sicke, the Bombers likely would have gone into the half with a 2–0 lead. Dutchman junior forward Robbie Michalski had the ball in the Bombers’ box, but a shove from Sicke sent him to the ground. The referee gave Michalski a penalty kick, which he sent to the right side for an easy goal.

The Bombers came out firing in the second half. In the 53rd minute, senior forward Aidan Keenan rocketed a shot toward the net, but it went just a bit wide, missing the post by a foot. Union drove down the field and earned a corner in the 56th, but nothing came of it.

In the 58th minute, junior forward Christian Leach of the Bombers was tripped in the box by senior defender Christian Rufo of the Dutchmen. The referee awarded Leach a penalty kick, which Rufo was unhappy about and began arguing with the official. In response, the official gave Rufo a yellow card.

In response to Rufo’s card, junior midfielder Ethan Layton of the Dutchmen started arguing with the official. This led to another verbal altercation but ultimately ended with Layton earning a yellow card to make it three on the day for the Dutchmen. After a long delay, Leach netted his penalty kick to give the Bombers a 3–1 lead.

The score did not hold for the rest of the game, which went with little action until the 70th minute, when Rufo would make a perplexing move. After kicking the ball way out of bounds to slow down the game and giving the Bombers a throw–in, Rufo intercepted the ball that was being passed from the official to the Bomber athlete attempting to throw it in. He then proceeded to punt the ball out of bounds again, over the fence and into the nearby parking lot, all without the ball ever being live.

The referee quickly made his way to Rufo, giving him his second yellow card, resulting in a red card, and ejecting him from the game. The Dutchmen would play the last 20 minutes a man down.

The disadvantage did not seem to affect the Dutchmen much, though, as they were able to hold the Bombers off for most of the final minutes. In the 85th minute, the Bombers had a corner kick that was cleared out to about 50 yards downfield, where Harrison would send a laser that missed by the smallest of margins — bouncing downward off the crossbar and getting easily wrapped up by Speck.

Prior to Oct. 14, the Bombers had only scored five goals in 12 games and had not scored more than once in any game yet. Eldridge said that working on scoring has been a key point of emphasis for the team for a while now, so it was good to see it pay off over two back-to-back games where the Bombers combined for four scores.

“We did about six hours of finishing in the last three days and we got four goals this weekend,” Eldridge said. “We’ve had struggles to score goals, so we’re certainly super happy with it. The guys deserve all the credit.”

Following games on consecutive days, the Bombers now get a week off before heading to Rensselaer Polytechnic Institute to take on the Engineers at 2 p.m. Oct. 22.