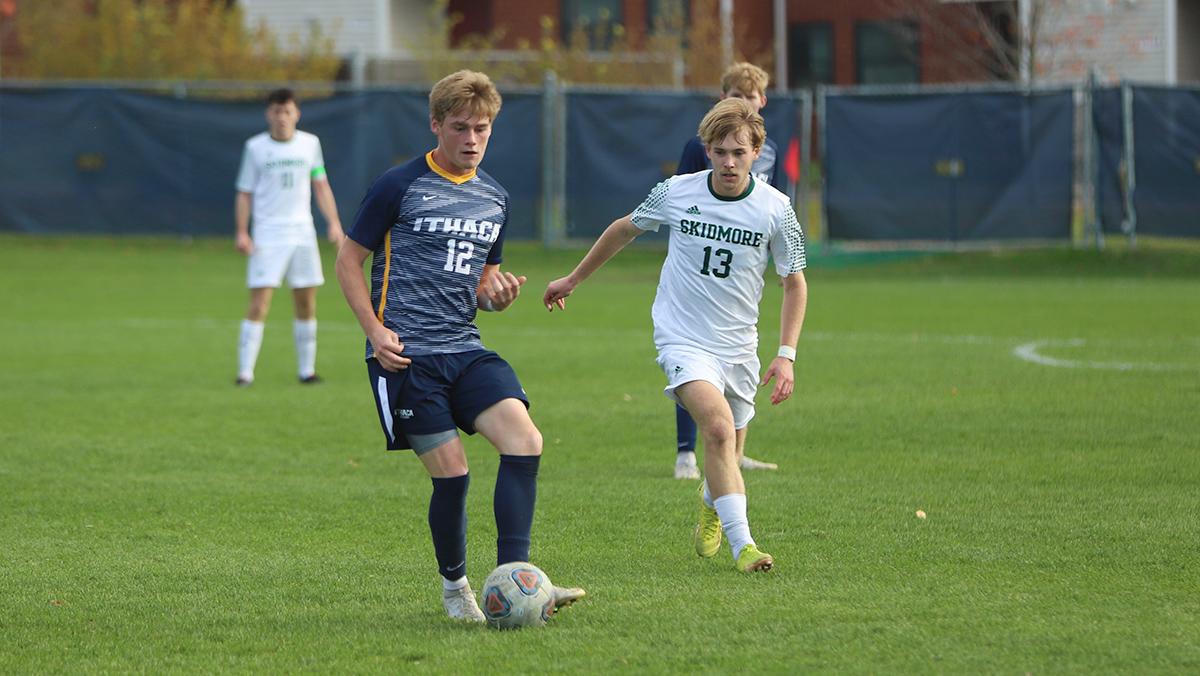 A hard-fought contest between the Ithaca College men’s soccer team and the Skidmore College Thoroughbreds led to a 1–1 draw Oct. 14 at Carp Wood Field.

The Thoroughbreds were relentless in their offensive attack early, keeping the ball out of the hands of the Bombers’ offense, but none of the pressure led to anything on the scoreboard.

The Bombers’ first attack came with 31:48 remaining in the first half. Senior defender Brendan Lebitsch lobbed the ball into the box, however, the Thoroughbreds’ defense was able to kick the ball out to their sophomore midfielder Ethan Slager to put a stop to the Bombers’ attack.

With 27:32 remaining in the first half, junior defender Conor Baird sent in a cross to senior forward Aidan Keenan, who got his head on the ball but sent it to the goalkeeper’s left to once again leave the South Hill squad without a goal.

The lone goal of the first half did not come from a foot of a Thoroughbreds, but the foot of Lebitsch. The Thoroughbreds went on a run with just over two minutes in the half, as first-year student midfielder/forward Tobias Catizone slid it under junior goalkeeper Ian Whitfield, Lebitsch tried to clear it, but sent it into the top of the net to give a 1–0 lead to Skidmore.

Early in the second half, the Thoroughbreds launched a long cross to junior forward Max Mian in the box, however, Whitfield got a hand on it and deflected it right to Mian. With no one in goal, Mian wound up for the shot, but Baird took out the legs of Mian, allowing Whitfield time to get on top of the ball and end a golden opportunity for Skidmore.

Needing to get on the board, sophomore defender Jack Longo launched a long pass into Thoroughbreds’ territory. The ball was tracked down by Baird, who sent in a pass to junior midfielder Reefe Harrison, who then put it into the back of the net to even the game up at 1–1.

While both sides had chances in the final 30 minutes of the contest, the best chance came with three minutes left. The Thoroughbreds launched an aggressive push to take a late lead. Slager launched in a pass from junior forward Kamal Ibrahim who got a foot on it, but Whitfield got a hand on the ball, launched it into the air, and was able to bring it in and end what would be the last attack for Skidmore.

“It was class from Ian,” head coach Garret Eldridge said. “It was one of the best I’ve ever seen live. He was great today and earned himself another start against Union [College].”

Despite the own goal and many calls not going the Bomber’s way, Eldridge was proud of how the team fought through a physical contest.