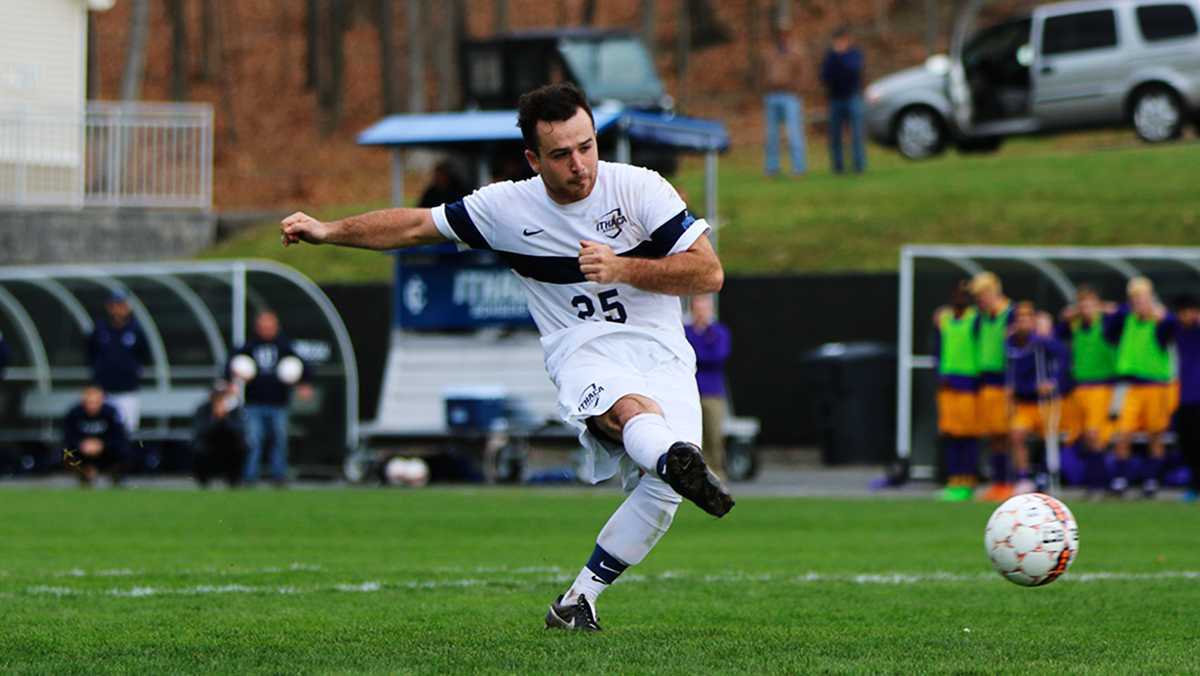 The top-seeded men’s soccer team took on the No. 4 Elmira College Soaring Eagles in a semifinal matchup of the Empire 8 Championship on Nov. 6 at Carp Wood Field. In a thrilling game from start to finish, the Bombers took the game in 11 rounds of penalty kicks after 110 minutes of scoreless play between the two teams.

It was a slow start for both squads as they battled in the middle of the field, but the few chances from each side were snuffed out by the goalkeepers: junior Zach Jacobsen for the Bombers and senior Austin Mansell for Elmira.

As seems to be the case with most of the Blue and Gold’s matches this season, it was rough and physical on the pitch. Senior defender Jordan Filipowich and junior forward Cobi Byrne were each shown yellow cards in the first half, while Elmira’s freshman defender Colin Morrison was also booked. The Blue and Gold ended up with a total of four yellow cards on the day.

Junior forward Sean Forward might have had the best opportunity of any player on the field with under 20 minutes to play in the first frame. The ball fell to his feet in front of the net, and with Mansell caught out of position, he put a shot on net.

A number of Elmira’s defenders who had swung in behind their keeper were able to block the shot and boot it out of harm’s way. The half ended scoreless with the Bombers ahead on shots nine to four.

The second half featured a few good chances at goal with the defenses stepping up and clearing out any ball out of the box.

Junior midfielder Sam Boylan made a nice run down the right flank and beat his defender before attempting a cross. The ball seemed to connect with an Elmira defender’s arm and go out of bounds. Boylan looked for a handball, but the referee seemed to disagree as he waved for play to continue. The Waitsfield, Vermont, native continued to argue the non-call and was given a yellow card.

Boylan said he thought the referee was incorrect, but that it is part of the game.

“It happens,” he said. “I mean I obviously thought he got it wrong, but it happens. He didn’t have a great view. It was more the sideline ref if anything.”

The second half ended the same as the first as the teams were scoreless through 90 minutes, and the game headed to overtime.

A dicey moment for the Bombers defense occurred at the end of the first overtime as junior defender Ellis Masterman let a ball roll close to Jacobsen as an Elmira attacker pressed forward. Masterman was able to clear the ball away just in time, and the first overtime ended with the 0–0 deadlock still intact.

The second overtime showed the fatigue of playing over 100 minutes was beginning to show on the field, and the penalty kick scenario would decide the contest.

The crowd at Carp Wood Field fell silent as each player approached the ball. Both teams went through their 10-man shootout lineup once, and every shot found twine. They re-started from the top of the order.

On the first kick of the second round, Jacobsen dove to his left and palmed away a ball from freshman midfielder Aidan Gray. With the upper hand and a chance to win, it was Boylan placing the ball on the penalty stripe, stepping back, and slotting one home to give the Bombers the win.

For his part, Jacobsen said in a penalty kick situation the pressure is not on him as a goalie, but rather on the shoulders of each player he faces.

“They’re the ones who have to make the shot. I just have to make a save, and they’re expected to make every single one,” he said. “I personally love PK’s, but as a keeper you have to have a short memory, especially in PK’s. If you let one in, onto the next one. Just got to save one, you have to keep telling yourself that.”

Jacobsen said a big part of the defensive game plan was to make sure they knew where Bryant was at all times on the field and put two players on him during set pieces.

Ouckama echoed his keeper when talking about how to stop a dynamic offensive player like Bryant.

“He’s a player that deserves a good amount of attention, and he got it today, especially on set pieces where he’s very dangerous,” he said.

With the win, the Bombers move on to play in the Empire 8 Championship against No. 2 Stevens Institute of Technology at 1:30 p.m. Nov. 7 at Carp Wood Field with an at-large bid to the NCAA Division III playoffs on the line.