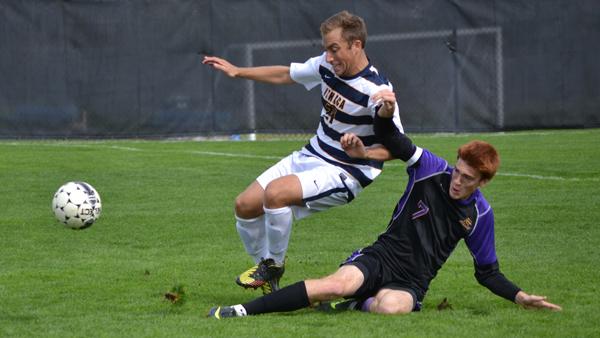 The men’s soccer team rallied to win 2-1 against Alfred University on Saturday on Carp Wood Field. The Bombers extended their unbeaten streak to eight games — their longest streak since the 2005 squad finished the season with an 11–0–1 mark in its last 12 matches.

The Saxons took the lead in the first half after senior forward Frankie Mannino intercepted a back pass toward the goal, maneuvered the ball around Bombers freshman goalkeeper Kenny Chapman and put the ball into an open net.

Alfred maintained the lead until the 64th minute, when Bombers sophomore forward Zach Hutchinson ripped a shot from close range that forced Saxons junior goalkeeper Jacob Bird to make a save but give up a corner. On the corner kick, a scramble in the box led to a Saxons own-goal. The goal was credited to Bomber sophomore midfielder A.J. Wolfanger.

The score stayed tied until 4:43 remained on the clock, when Hutchinson was able to score off a deflection in the box. Hutchinson said he was in the “right place at the right time.”

Senior back Dan Shirley said the Bombers were able to make a comeback because they were playing as a team.

“We’re all one, we’re all held accountable and like [Head Coach Andy Byrne] says, we play for each other,” Shirley said. “We kept on pushing and pushing, and we knew that eventually those goals would come.”

The Blue and Gold had the advantage in the last 12 minutes of the game after Alfred sophomore forward Brandan Collins received his second yellow card of the match, forcing the Saxons to play a man down. Saxons Head Coach Scott Miller also received two yellow cards late in the game. Hutchinson said the Bombers were able to overcome the gritty style of play in the second half.

“It was definitely a chippy game,” Hutchinson said. “There were a lot of issues going on, but it’s nice we were able to fight through it, leave it all on the field and then take care of what we needed to do.”

Saturday’s win marked the first time in five games the South Hill squad was able to end in regulation. Shirley said it felt good to avoid an overtime period.

“We all knew that we didn’t want to relive the past few games,” Shirley said. “I’m relieved, I’m not as sore, I’m not as tired as I’ve been in past games, so it feels great.”

The Bombers will travel for the next four games before returning home to Carp Wood Field on Oct. 20. Shirley said the team will be focusing on finishing its scoring opportunities to help keep its unbeaten streak alive on the road.

“That’s always our number one thing we’ve got to address is finishing, because going forward those chances aren’t going to come as often as they have these past games,” Shirley said.