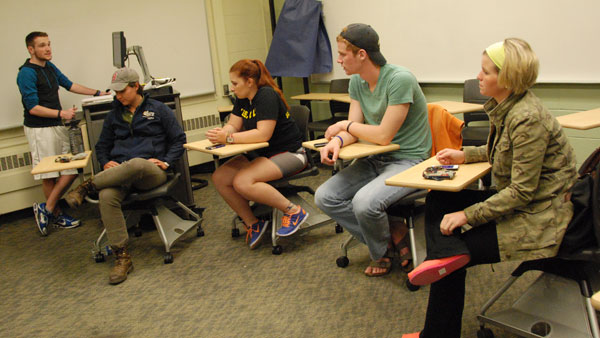 This fall, students at both Ithaca College and Cornell University founded chapters of the organization Athlete Ally, a program dedicated to ending homophobia and transphobia in sports.

In its latest national index, Campus Pride ranked the college among the top 25 campuses friendly to lesbian, gay, bisexual and transgender students. This is the fourth consecutive year the college has earned a five-star rating. Previously, it has also recognized the college for having one of the top 10 LGBT-friendly collegiate sports programs in the country.

Even within the most tolerant institutions, however, students who identify as LGBTQ find it difficult to be open about their sexuality.

Sophomore Kyle James, the founder of the college’s Athlete Ally chapter, said he was motivated to create the group at the college because of his past experiences on teams.

“After seeing the extremely homophobic and transphobic culture in the sports teams at my high school, I wanted to be sure that every LGBTQ student at IC felt safe being who they are on their athletic team,” James said. “Athletics are a place to build friendships and camaraderie, and no student should be an exception to that because of sexual orientation.”

Sophomore Chris Kelley, secretary of the college’s chapter, rows for the men’s crew team and identifies as gay. He was outed by the team last November.

“Surprisingly, the men’s crew team wasn’t very tolerant to begin with,” Kelley said. “Instead of caving and quitting, I stayed on the team and made the first novice boat. Now the men’s team has shifted to a more tolerant and accepting environment.”

Cornell junior Atticus DeProspo, a soccer player, founded the chapter of Athlete Ally on East Hill. He hopes it will help foster a safe and respectful environment for all athletes, including those who identify as LGBTQ.

“When it comes to soccer, the sport is all that matters,” he said. “We work hard together toward common goals of repeating as Ivy League Champions and making a run in the NCAA tournament. I’m looking to spread the message of tolerance, respect and acceptance for all human beings in the athletic community.”

DeProspo published a “coming out” letter with Athlete Ally in early August, inspired by his professional-soccer role model Robbie Rogers. He explains the “locker room” culture and the stigma that still exists around homosexuality in athletics. He said his experience as a gay athlete has been a positive and enjoyable one, but that is not the case with everyone.

Campus Pride’s 2012 LGBTQ National College Athlete Report included surveys of 394 students who identified as LGBTQ out of nearly 9,000 NCAA athletes surveyed, although no participants in the report identified as transgender. The report said athletes are three times more likely to experience harassment than their heterosexual teammates.

One in four LGBTQ athletes said they felt pressured to remain silent about their sexual identity among teammates, and 21 percent revealed they were targeted by derogatory comments made through social media.

Cornell athletic teams have no data for LGBTQ participation in their varsity sports, but Sarah Wattenberg, the Andrew ’78 and Margaret Paul assistant director of athletics for student services, has welcomed the group.

“Its foundation is about equality and inclusiveness, which aligns with Cornell University’s mission and motto, ‘Any person, any study,’” Wattenberg said.

Before coming out, one of the people DeProspo confided in was Brian Healey, who serves as program coordinator for the national Athlete Ally organization. Healey also shared his story with the athletic department at St. Michael’s College, where he was a captain of the men’s tennis team.

For Healey, beginning a conversation around this issue is an important first step to creating the most inclusive environment for the LGBTQ community.

“Intolerance … has many root causes, ignorance being one of them,” Healey said. “That’s why we work so hard to educate as many people as possible about how damaging and lasting this can be.”

This article was originally produced in the Multimedia Journalism 48000 class.