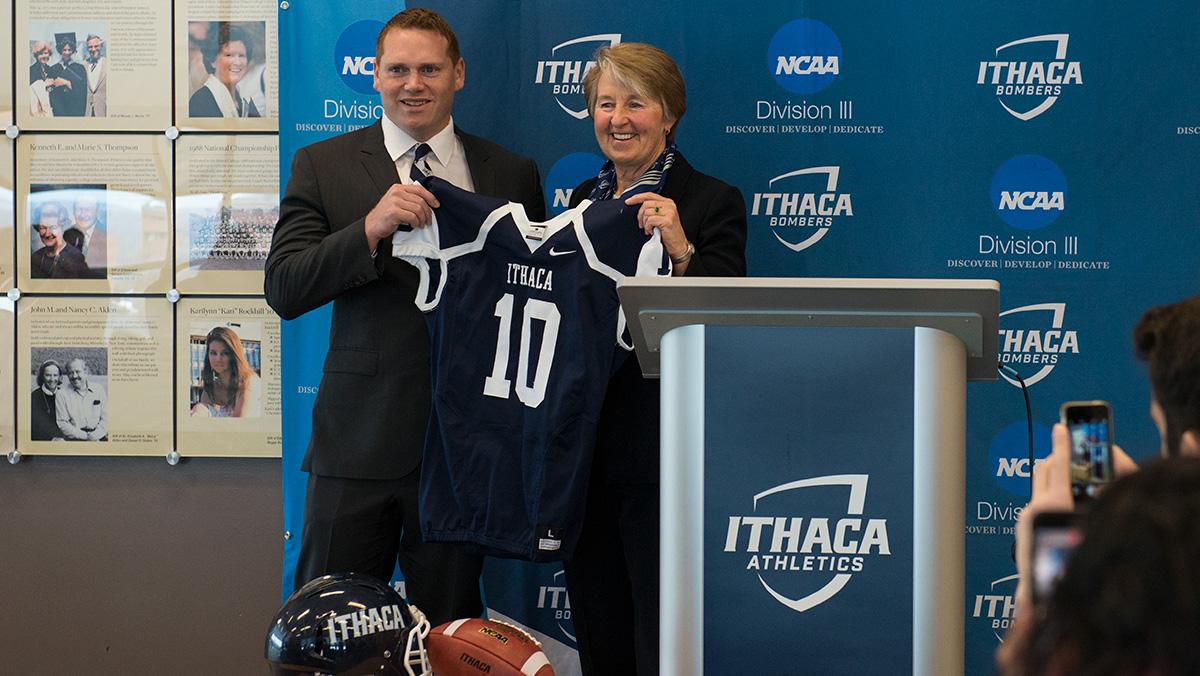 Dan Swanstrom, the new head coach of the Ithaca College football team, announced he will be evaluating the whole program before making final decisions about his coaching staff for next season.

“The whole program is under evaluation, and I’m not in a position, being here for less than eight hours to make a decision on people’s careers and futures,” Swanstrom said during a news conference held by the Ithaca College Office of Intercollegiate Athletics on Dec. 13.

Swanstrom was hired Dec. 12 to replaced Mike Welch ’73, and was the quarterback’s coach and recruiting coordinator at the University of Pennsylvania.

“We were very thorough in analyzing the needs of the program and spent a lot of time identifying the qualities we thought in the next leader of Bomber football,” Susan Bassett ’79, director of intercollegiate sports, said at the conference. “Dan Swanstrom emerged as the right person to lead Ithaca College football.”

He said he is not very familiar with the college’s program yet, as he was focused on the interview process and the conclusion of the University of Pennsylvania’s season.

“I tried to watch some film last night for the first time, got through about a half,” Swanstrom said. “There are a handful of guys that I’ve met through the recruiting process at Penn and guys who have come to camp.”

One of the other finalists was defensive coordinator Mark McDonough. Swanstrom said he knows it will take some time for the team to trust him.

Swanstrom said Ray Priore,  head coach at the University of Pennsylvania, encouraged him to apply for the position.

“I was so wrapped in our season, it was so beyond me to have my resume and materials ready to go,” Swanstrom said.

The University of Pennsylvania football team was scheduled to play at Cornell University on Nov. 19 in the Ivy League Championship. Swanstrom said the first thing he did when he got off the bus was go for a run around the Ithaca College campus to get a feel of it.

Last season, the Bombers went 5–5. Swanstrom said the team will definitely be running a spread offense but he needs to evaluate the players before figuring out the details.

“The offense is going to be built around the players,” Swanstrom said. “There is a systematic approach to the offense, but there are a lot of different answers that fit where your talent is going to lead you.”

The team will be having its first meeting under Swanstrom on Dec. 13. He said he has not spoken to Welch yet but plans to soon. Though he does not have a short term plan yet, he said his concern right now are the players and the team’s goals.

“If you look at this situation, this is a program that has success,” he said. “It’s very different than walking into a program that went 1–9 where the whole coaching staff got fired. I think the biggest thing for me is recruiting this team, making sure we are on board with the vision and direction we are going.”