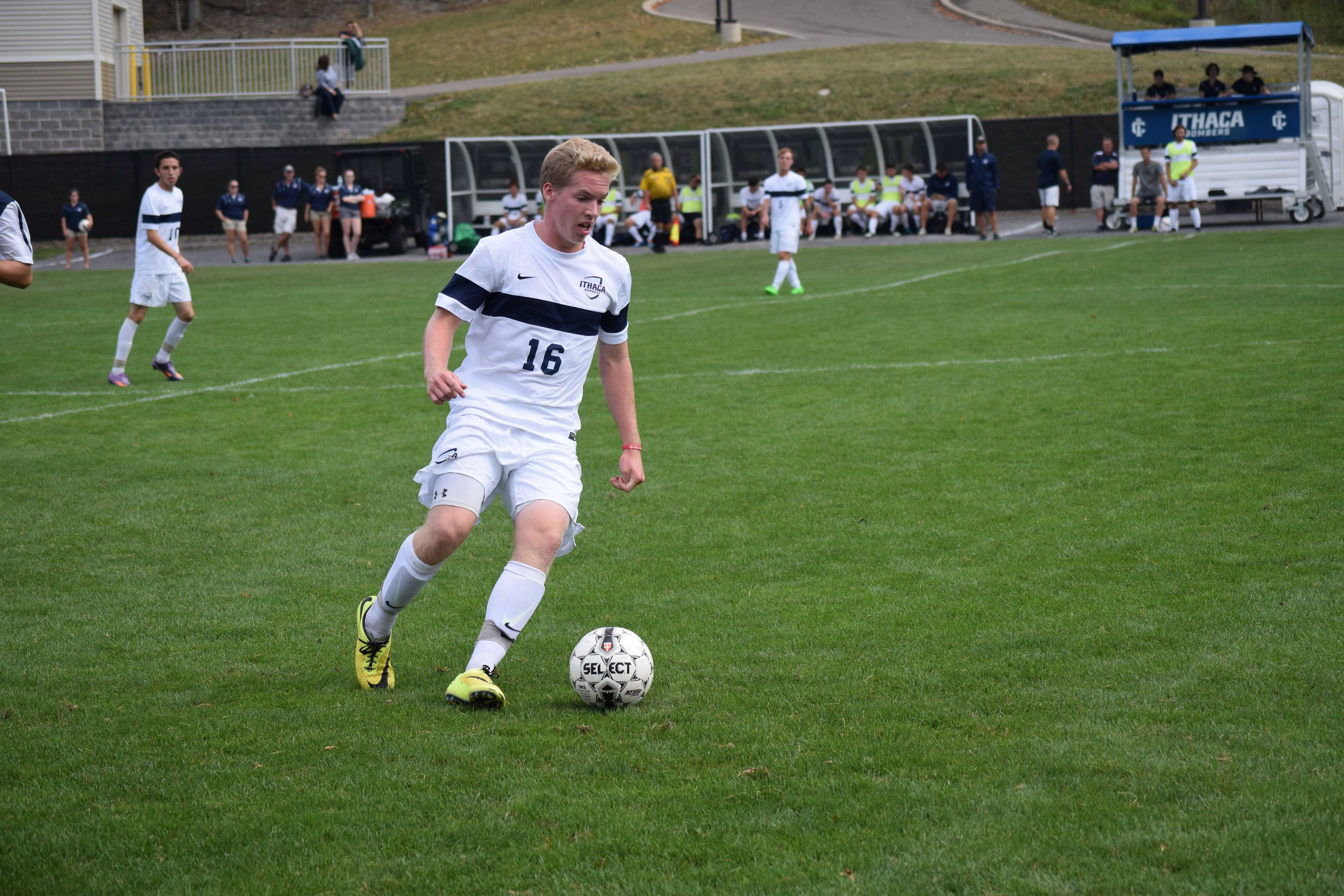 The men’s soccer team began conference play against Utica College Sept. 19 with an impressive 4–0 win over the Pioneers at Carp Wood Field.

The South Hill squad finally snapped its losing streak that had been haunting it since the start of the season. It was the first win for head coach Patrick Ouckama in his Bombers head-coaching tenure.

The playing conditions were similar to the rainy, wet condition that the Bombers experienced when they played SUNY Cortland Sept. 9, except this time it was their opponents who matched the sloppy conditions on the field.

Unlike previous matchups, the Bombers went on the attack to start the game, stepping up on the Utica forwards and preventing them from getting on the Bombers’ side of the field.

The Bombers jumped on the board about three minutes into the game, as junior forward Sean Forward crashed the net in a skirmish to make it 1–0 for his first goal of the season.

Forward said the goal was a big weight that he had been trying to lift off his shoulders.

At the 22:00 mark, junior goalkeeper Zach Jacobsen went out of his crease to challenge a Utica defender. Jacobsen missed and left the net wide open. Luckily, junior back Andrew Coburn was able to bail out Jacobsen, deflecting the Utica shot off his leg and out of bounds.

The pitch was still for an extended period of time until Utica junior defender Evan Bailey saved a sure goal for the Bombers with his hand. This immediately resulted in a red card for Bailey, ejecting him from the game and giving the Blue and Gold a penalty shot.

Freshman midfielder Zachary Lichtman took the shot and narrowly missed, hitting the crossbar as it shocked the Bombers’ bench.

The Bombers were able to stop the Pioneers from making any significant plays in the half and headed into halftime with a 1–0 lead, outshooting Utica 9–7.

The second half started with aggression from both sides as each team was trying set its tempo to control the flow of play for the game. Although, neither team seemed get any consistent pressure as the half began.

It all changed when freshman forward Jose Contreras made a pass to junior midfielder Brandon Thompson nine minutes into the half. Thompson’s booming kick got just past Utica goalie Nick Hallet for the team’s second goal of the game.

Thompson, who did not start this game, continued to make a big contribution in the second half.  After going in on the goalkeeper midway through the half, Thompson was taken down from behind, and the Bombers were issued another penalty shot.

Junior forward Sam Boylan took the shot this time around and scored with ease to increase the Bombers’ lead to 3–0 over the Pioneers.

Boylan said the team was relieved to finally get its first win to boost its moral.

Freshman midfielder Matt Bukowski scored an empty net goal to give the Bombers a 4–0 lead and silence any chance the Pioneers had left.

Bukowski said it felt good to finally contribute to the team by scoring his first goal of his Bomber career and his patience has finally paid off.

“It was awesome,” he said.  “I’ve been waiting for a while to get into a game and been getting a little more playing time each game.”

The Bombers return to action Sept. 23 for a road game against the University of Scranton.