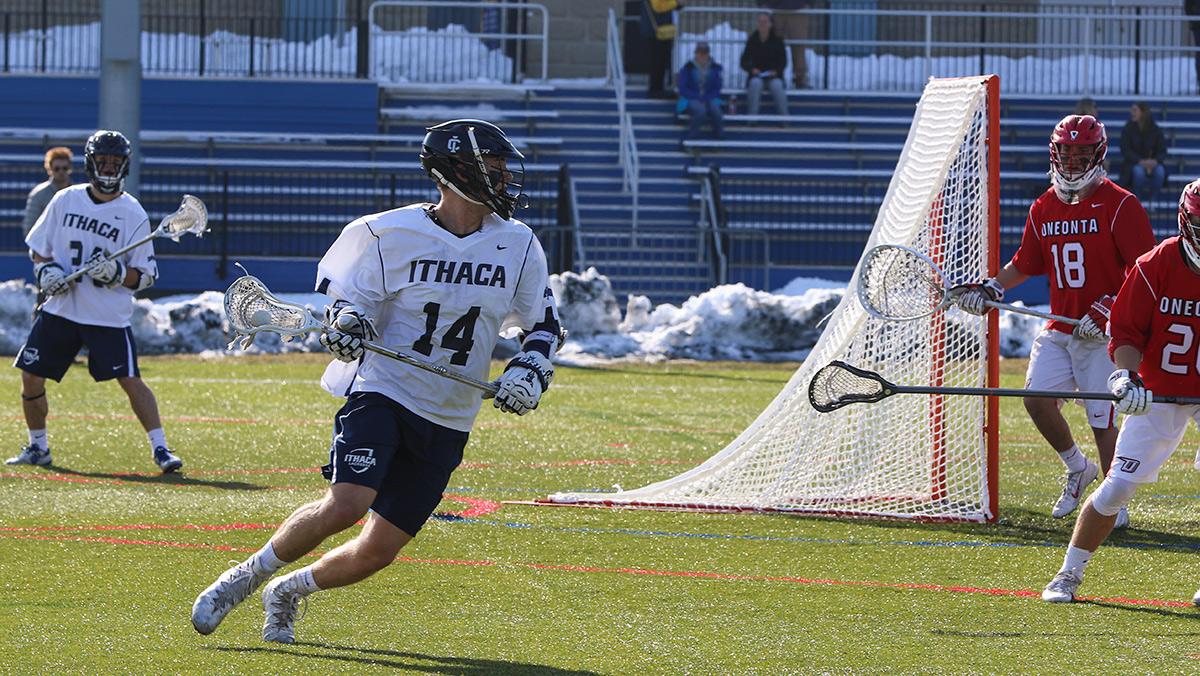 YANA MAZURKEVICH/THE ITHACAN
Senior attackman Jack Shumway looks to pass the ball in the Bombers’ 12–6 win against SUNY Oneonta on March 21. Shumway has 37 goals and 11 assists for a total of 48 points.
By James Murphy — Staff Writer
Published: April 5, 2017

As the clock hit zero on the Ithaca College men’s lacrosse game against Bowdoin College on March 15 during the team’s spring break trip in Davenport, Florida, the team celebrated its fifth win of the season. The scoreboard may have surprised those who aren’t familiar with the team or with lacrosse in general, as it read 17–7.

One might associate the score with a football game, but it is really attributed to the Bombers’ dominant offense.

The South Hill squad has been successful since head coach Jeff Long took the helm in 1988. More recently, that success is largely due to the team’s high-scoring offense.

In 2016, the Bombers finished third in Division III in scoring offense. The team has kept that strength up this year by averaging 15.70 goals per game, compared to last year’s average of 16.71. This has helped lead the team to an 8–2 record and a spot as the No. 9 team in the division in the most recent United States Intercollegiate Lacrosse Association coaches poll.

One of the largest contributors to this offense is senior attackman Jack Shumway. He averages 4.25 goals per game, the most of anyone on the South Hill squad and the fifth–best in Division III men’s lacrosse.

Since coming to the college, Shumway said he has been able to improve himself both physically and mentally to play at this level.

“It’s really come down to the little things,” Shumway said. “You never think there’s nothing you can’t work on.”

Shumway’s been taking on a heavy workload for the team, but he hasn’t done it alone. He’s had help from junior attackman Jake Cotton. Cotton has 28 assists and has scored 12 goals, making him second-best on the team.

Since joining the team, Cotton said he has been impressed by the selflessness shown by his teammates and sees it as a key component of the Bombers’ efforts to qualify for the national championship.

“If we play unselfishly the whole 60 minutes and move the ball as fast as we can, I think there are very few teams that can stop us,” Cotton said.

There’s a popular saying that often echoes throughout sports, “Offense wins games, but defense wins championships.” However, the offense might be doing both on this year’s men’s lacrosse team. Out of the 20 teams ranked in the USILA coaches poll as of March 28, eight of them have an offense ranked in the top 20 in goals scored.

Long, who recently celebrated his 300th career win, said that while he doesn’t think offense alone can win championships, he does see it as an integral part of the game. The team promotes transitions from offense to defense that allow defensemen and even goalies to get the offensive drive started.

“I’m not sure which [area] wins championships, but you have got to be good at both ends of the field to even get a chance to play for a championship,” Long said.

The Bombers’ roster is much smaller than most others in Division III — 36 players, compared to an average of about 50 — which allows head coaches to address individual problems more effectively.

Shumway said that to take their game to the next level and possibly get a crack at the national championship, the team will have to play their own game and not adapt to anyone else’s.

“We bring our game every day,” Shumway added. “That’s the best we can do, and hopefully, it’ll work out for us.”

Last season, the Bombers went 20–2 and made it to the NCAA quarterfinals before falling to runner-up Tufts University 19–7. This year, they’re close to getting back to the quarterfinals, and they’ll need a lot of help from their offense to get them there.

Despite the strength of the offense, the more critical trait to have is depth on the roster, Long said.
“If you can run seven or eight middies and four or five attackmen every game, that’s really the key that will wear down a team more than anything because most people may not have the depth defensively to match up against our guys,” Long said. “So, again, it’s more about strength in numbers besides specifics.”

IC men’s lacrosse suffers their second overtime loss on the road to Steven’s Institute of Technology 11–10.