Ithaca College students and professors come together outside of the classroom at CrossFit Pallas. Located on the outskirts of Ithaca on Cherry Street, the CrossFit Pallas gym has created a community of its own.

CrossFit is a strength and conditioning program that involves performing functional movements that are constantly varied at high intensity. Classes at CrossFit Pallas are an hour long and focus on different muscle groups. The exercises are based on movements found in gymnastics, weightlifting, running and rowing, among many other exercises. 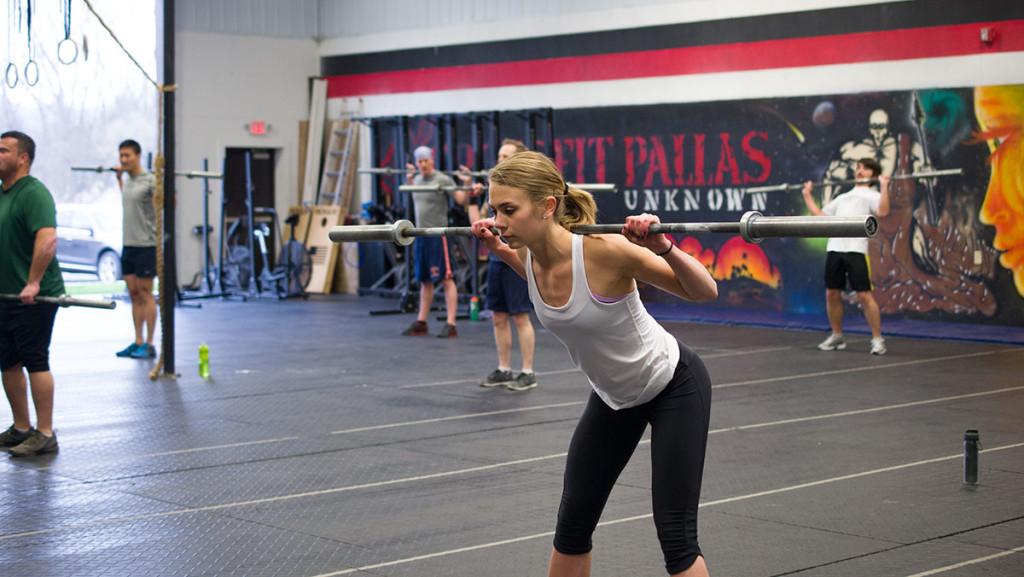 Sophomore Kathryn Montgomery, who came across the gym after being referred to it by a teammate on the dance team, said there are two main things that they combine into one class. The first involves doing as many repetitions of an exercise in a given amount of time. The second is all about strength and taking the time to make clean lifts.

“With CrossFit, the coach prescribes a workout for you, and there is some science behind it,” Montgomery said. “They tell you exactly what to do, and there’s a reasoning behind it. I don’t know that reasoning, but it works, and it only takes an hour.”

The first CrossFit gym was created in 2000, and the brand has since expanded to over 11,000 gyms nationwide.

Montgomery said the variety of exercises has helped her get stronger.

“It’s hard to say what a typical CrossFit workout is because they are so different,” Montgomery said. “Because you don’t do the same movements every day, you will come back to a movement that you haven’t done for weeks or even months, and you test that, and you are just amazed because you are doing things you couldn’t do months or weeks ago.”

The program focuses on data and individuals follow their progress. CrossFit Pallas holds an open, where members of the gym compete against each other and themselves to see where they are in their training.

Brian Dozoretz, manager of recording services in the college’s School of Music, said he got into CrossFit after hearing about it from his wife.

“My wife loved it right off the bat, and she said that I would actually love it,” Dozoretz said. “And I was like, ‘No way.’ Being up here, I get so many benefits through the fitness center and wellness clinic, so I was like, ‘I don’t need to pay to go off campus.’”

After hearing more about CrossFit Pallas, Dozoretz said, he eventually decided to give it a try.

“I heard more and more about it, and they were opening their new space,” Dozoretz said. “So I thought that was fairly interesting that they were expanding so much, and I had seen how great it had been for my wife.”

CrossFit Pallas is currently the longest-standing CrossFit affiliate in Ithaca and is owned by Tim Paulson ’12 and Eamon Coyne ’12.

The co-owners and training partners met on the college’s club ice hockey team. Since leaving the college, they have combined their passion for CrossFit to encourage the passion in others.

Paulson said he enjoys getting to work with the community.

“Getting up every day and making people more awesome physically and mentally is a pretty awesome job to have, so I would definitely consider myself lucky,” Paulson said.

The athletes at CrossFit Pallas said they enjoy the community sense they get when they walk in the door. Unger said it is easier to train when they have a support system cheering for them and supporting them both in and out of the gym.

“We have such an awesome community,” Unger said. “We all come together in this one place, and we care about each other. We go out to eat together, and we just check up on each other. Waking up knowing I’ll see my friends there really helps.”

Paulson said he works a little to promote the community sense in their gym but that the athletes really take it on themselves.

“When people come to classes, they usually show up 10–15 minutes early and leave 15 minutes late just because they’re socializing and they’re hanging out,” Paulson said. “It doesn’t matter where you go to school. It doesn’t matter what you do for a living because everyone is there for the same reason.”

Dozoretz said he really enjoys seeing the same people both in and out of the gym and works to promote the sense of community.

“We’re all in it together,” Dozoretz said. “Sometimes I’ll throw out an email saying, ‘Oh, I’m going to the 3:30. Does anyone need a ride there or back?’”

Dozoretz also said it is nice to see people around campus and have CrossFit as a common interest to talk about.

“After the first class I did with Jim, the next day, I saw him in the library, and he was like, ‘How are you doing?’ And I was like, ‘I’m sore,’” Dozoretz said.

Unger said she is in the best shape she has ever been in. She feels healthier in every aspect of her life.

“I wake up happy every day. It’s had a very positive impact on me,” Unger said.