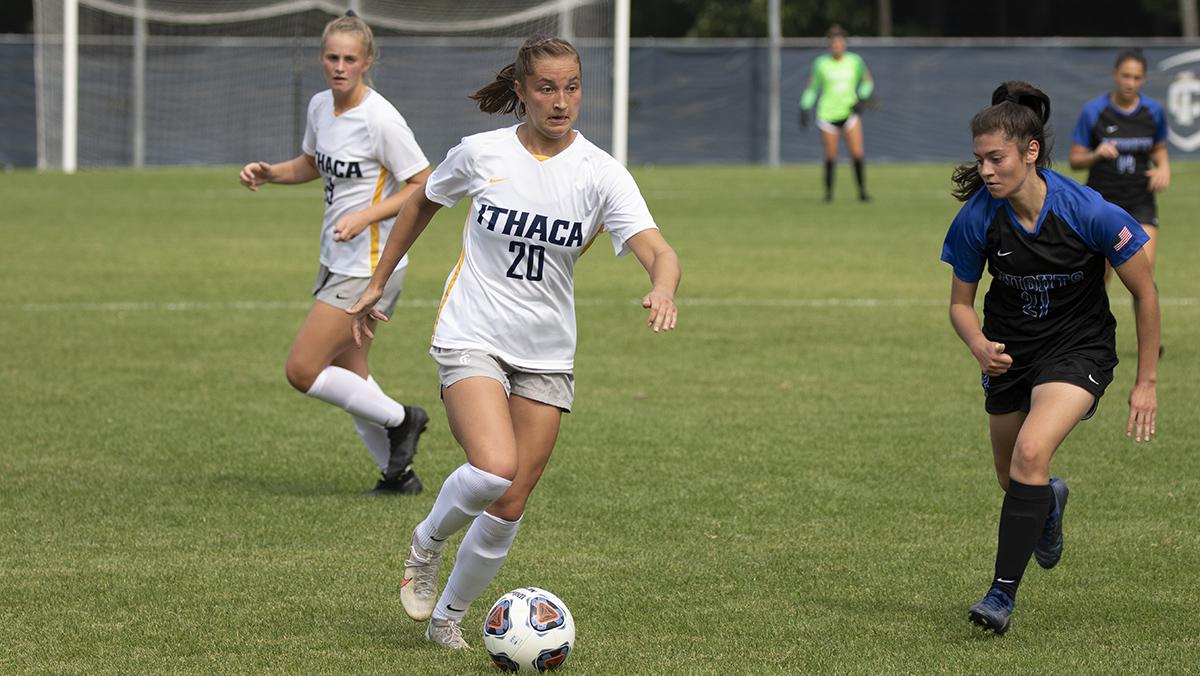 The Ithaca College women’s soccer team has started its season by winning all four of its games, while allowing just a single goal from their opponents. Senior midfielder Megan O’Reilly has played an integral role in this impressive start, scoring a goal and an assist in the team’s most recent victory over Mount Saint Mary College on Sept. 12.

O’Reilly has appeared in the NCAA Tournament, playing in both of the squad’s games during its 2018 championship pursuit. The following season, she started every game she appeared in and scored four goals. After losing the 2020 season to the COVID-19 pandemic, O’Reilly and the Bombers have their eyes set on the NCAA Tournament again.

Staff writer Mark Puskey sat down with O’Reilly to discuss the season thus far and what to expect moving forward.

Mark Puskey: The [women’s] soccer team has started 4-0 this season, what is clicking for the team right now?

Megan O’Reilly: So right now, it’s really just we’re focusing on every play, every day. So we’re finding little things in practice, like finishing our shots and making sure our first touches are where we want them to be, and kind of focusing on certain things in different drills. And that’s making us just get better every single day.

MP: What is there still to improve on?

MO: We felt we learned a ton from our games and every training session that we [did]. And so we really just try to build off of everything and learn from different plays. Right now we’re trying to figure out our connecting passes up top with linking the ball, finding through balls, and stuff like that. … Then that’s our focus in our next training session is like figuring out what we were missing. What’s that missing link? And then working through that with soccer.

MP: Do you see any similarities between this team and the team that made the NCAA tournament in 2018?

MO: Yeah, 100 percent. I mean, our just motivation, to want to be good and like motivated to make it to the NCAA Tournament really has pushed us. … We’re really pushing to be just as good as we were when we went to the NCAA Tournament. Right now we’re starting on a good streak, which is good… We have really good training sessions, and we’re really effective when we are in games, and very good, very exciting. We’re happy about it.

MP: Is there anyone on the team that has gone above and beyond so far this season?

MO: I would really say that everybody stepped up. I think, obviously being a first-year and even the sophomores not having a true season last year, they’ve really stepped up just because they are technically sophomores on the team. But it’s their first year kind of being a first-year at the same time, but also stepping into the role of the sophomore. I really think our upperclassmen have done a good job of making sure that everybody on the team feels welcome and ready to go. And we’re really pushing each other in practice. So it doesn’t matter what year you are, whether you’re a [graduate] student or your first year, you’re working hard and practicing. And whoever’s working hard and getting the job done is on the field. So it’s really just kind of like everybody stepping up and getting better every day, which is everything we need for it.

MP: What’s the team’s goal for this season?

MO: I’ve overemphasized this in this interview, every play, every day, it’s really just trying to improve one percent and making each other better. Whatever the focus is, and the drill is what we should be focusing on in that drill, whether it’s making the keepers better with a lot of overhead crossings, or it’s making the midfielders better with high pressure kind of thing. So it’s just really focusing on every play every day getting one percent better, and kind of keep chugging along with what we’re doing.