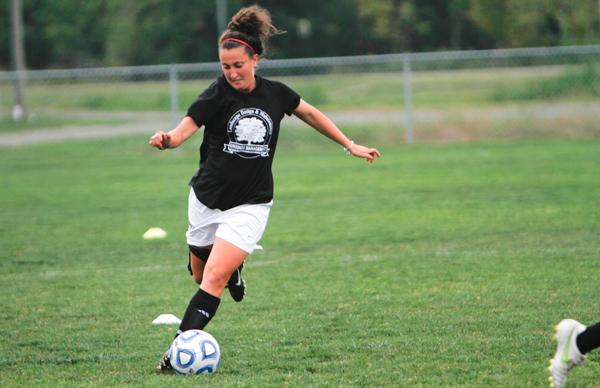 The women’s soccer team is trying to duplicate last year’s postseason run to the Final Four, and this year it will have an extra boost with two of its former stars returning to the lineup.

This season, senior defender Megan Palladino and graduate student midfielder Megan Trager are getting one more chance to play for the Bombers.

Palladino was a first-team Empire 8 Conference selection in 2010, helping to anchor a Blue and Gold defense that held opponents to 10 shutouts during the season. The following spring, Palladino suffered an anterior crucial ligament knee injury, commonly referred to as an ACL tear, during a spring practice session.

After realizing that the injury would require a long healing period, Palladino said her teammates poured out lots of support.

Unfortunately for the Blue and Gold, Trager suffered the same injury during a summer league game when she was hit in the knee with a hard slide tackle. Trager said she originally believed the injury was minor and would only require her to sit out a few months. After an MRI revealed a tear, she was surprised at how serious her injury actually was.

“I had never suffered a major injury of that magnitude before, so I really had no idea how to react or handle it,” Trager said.

When she was healthy, Trager was a dual threat to score and help other players score as well. In 2010, she scored five goals, the third highest number on the team. She was tied for second on the Bombers in 2009 with seven assists.

Without Trager in the lineup last year, the Blue and Gold turned to then-junior midfielder Julia Winn to fill the hole. Winn responded by tallying eight goals — twice as many as she scored in 2010.

To fill the void Palladino left in the back, the South Hill squad used a handful of players, including sophomore defensive back Stephanie Lucidi, who came off the bench 17 times as a freshman.

Trager had the advantage of living under the same roof as Marla Schilling ’12, who was an exercise science major. Trager said Schilling was able to guide her through rehabilitation procedures. These procedures included using certain exercises to help the previously injured knee.

As their rehabilitation processes come to a close, Trager and Megan find themselves in their final season in a Bombers uniform. Each player is glad to be on the field, but Trager said recovering her game is still a work in progress.

“My endurance is lacking still,” Trager said. “And I still am not at the point of playing a full 90 minutes because my primary focus during the offseason was my agility.”

Senior middle back Kathleen Kamerzel said the team is benefiting from having the two leaders back on the field. Trager and Megan have had a year on the bench to watch everyone else play. Kamerzel said the players are not afraid to talk with others to fix mistakes.

“They are both experienced players who have seen the game from the field and from the sidelines,” Kamerzel said. “And they both know what Coach Quigg expects during the game and during practice.”

Coming back too early from an injury is often a concern for coaches and players. Sometimes an early return to the field can set back an injury that hasn’t healed. This is not a concern for the returning players.

“You can never go out there afraid to play or else you’re going to be risking more of an injury that way than going out there and just giving it the best you have,” Trager said.

During the Bombers’ opening games last weekend, Megan and Trager found themselves back in game action. Megan started in both contests and Trager was able to put a shot on net. With the two players back in action, Trager said the South Hill squad is prepared to claim the Empire 8 Conference title for the first time since 2009.

“It’s a rush being back out their with the adrenaline pumping,” Trager said. “If we use that energy and play each game with all we have, then we can accomplish what we set out to do.”