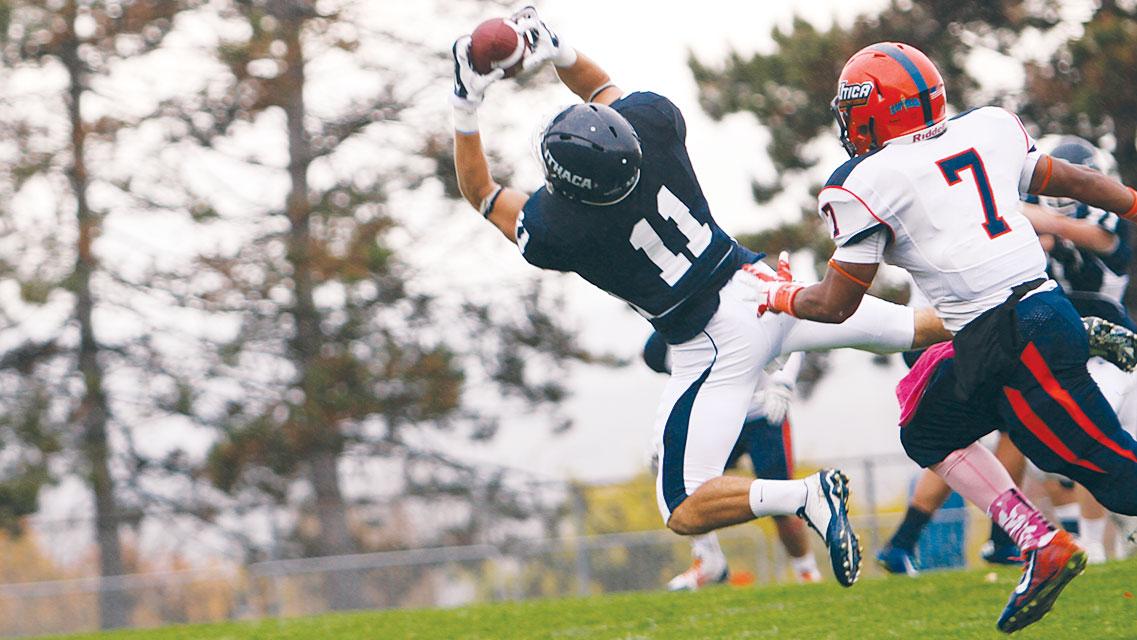 The football team continued its perfect start to the regular season with a 27–10 win over Utica College on Oct. 4 at Butterfield Stadium.

“This is a good football team, they’re 4–0,” Welch said. “We knew we had to stop their offense, and I thought offensively we did some good things. Tom hit a couple of explosives and a couple of guys made some key catches. I like what we’re doing.”

With the Cardinals and Pioneers each losing, the Bombers are the lone unbeaten team in the Empire 8. They host the Buffalo State Bengals on Oct. 11 at Butterfield Stadium.

The men’s soccer team earned its second victory of the season with a 3–1 win over Elmira College on Oct. 4 in Elmira, New York.

Senior back Casey Williamson opened the scoring with a goal in the fifth minute. Sophomore forward Sean Forward added a second goal early in the second half.

After a 65th minute goal from Elmira freshman Donte Donegal cut the lead to 2–1, junior back Joseph Dobbins put the game out of reach with a goal in the 79th minute.

In its second game of the week, the South Hill squad fell 1–0 at Hamilton College on Oct. 7 in Clinton, New York. The lone goal was scored in the 48th minute by Hamilton senior forward Dan Kraynak on an assist from junior midfielder Erich Marcks.

The Bombers record now stands at 2–6–2 on the year and their next game is against Utica College on Oct. 11 in Utica, New York.

The Blue and Gold ended the first half with a 2–0 lead after goals from sophomore forward Jess Demczar and junior forward Sarah Woychick.

After halftime, Woychick added another goal in the 57th minute. Junior forward Kelsey King and sophomore forward Holly Niemiec then combined for three goals in less than two minutes.

The South Hill squad’s defense was once again superb, which King attributed to hard work before the season.

“It’s the first thing we focus on during preseason and throughout the season we focus on defense more than anything,” she said.

In their second game of the week, the Blue and Gold lost to Stevens Institute of Technology 1–0.  The team’s record now stands at 8–2. The Blue and Gold next play on Oct. 11 at Utica College.

The volleyball team served up three more wins over the weekend to preserve its undefeated conference record. The victories put the Bombers at 14–3  on the season.

Head coach Janet Donovan said she was proud of the goals her team has accomplished so far on the season.

“It feels great to be undefeated,” she said.

The South Hill squad returns to action at 6 p.m. on Oct. 8 as it travels to SUNY Cortland.

The men’s and women’s cross-country teams competed at the Geneseo Invitational on Oct. 4. Meanwhile, the top six members of the men’s team ran at Lehigh University in the Paul Short Collegiate Invitational.

Junior Larkin Bohanan led the Bombers in the 8k race in Geneseo with a time of 26:28.4 and placed 49th overall out of 289 runners.

In the 6k event, senior Hannah Wright recorded a personal best time of 22:50.7.

At Lehigh University, junior Sawyer Hitchcock recorded a personal record of 25:16, placing 12th out of 341 runners.

Hitchcock’s time moved him up in rankings to 9th in the Bombers’ All-Time 8,000 meter record book. Hitchcock said the record is always on the back of his mind but he’d rather concentrate on getting better slowly.

“I was just focusing on improving over time, and it just happened on its own,” he said.

The team next heads to Clinton, New York, Oct. 11 to compete at the Hamilton Invitational.

In a stretch of two games in four days, the Bombers split games against William Smith College and Empire 8 opponent Elmira College.

William Smith handed the Bombers a 5–2 loss. The Herons scored four goals before the Bombers could notch a tally on the scoreboard in the Oct. 1 matchup, and the Blue and Gold could not recover.

In the Bombers’ fourth Empire 8 matchup of the season, the team defeated Elmira College 2–1. Sophomore forward and midfielder Colleen Keegan-Twombly scored both goals for the Blue and Gold in the first half of the game. The Soaring Eagles responded with a goal in the 59th minute, but the South Hill squad hung on and gathered its third conference win of the season.

The Bombers next face Empire 8 opponent Utica College and Washington and Jefferson University on Oct. 11 and 12, respectively.

In its sixth match of the year, the women’s golf team finished in second place with a score of 641 at the Williams Fall Invitational.

Senior Sharon Li led the team with a total score of 152, finishing behind only Shelby Shote of Williams College.

While the Bombers finished second out of the 16 teams competing, the Ephs ended up taking the tournament with a total score of 624. Sophomore Kimberley Wong, who shot a total score of 155, had the Blue and Gold’s next-best score.

Li said though three golfers shot in the 70s, the team was disappointed because it did not improve on the previous weekend’s overall score of 627.

“We were only able to play to our average,” she said. “My teammates and I hoped to play better.”

The Bombers will next tee off at the Wittenberg Pat Clouse Invitational at the Springfield Country Club in Springfield, Ohio, on Oct. 11.

The women’s tennis team bounced back from its first loss of the season on Oct. 4 against Stevens Institute of Technology with two commanding victories to improve its overall record to 8–1.

The team’s first victory came on Oct. 5 as it came out with a vengeance to defeat St. John Fisher 9–0 at the Wheeler Tennis Courts.

Senior Kelly Fishback led the way for the Bombers, only losing one game in all her matches combined.

They team backed up its shutout victory with an 8–1 victory over Hartwick College on Oct. 7 to finish its Empire 8 regular season schedule in Oneonta, New York.

From Oct. 10–12, the Blue and Gold will host the New York State Championship at the Wheeler Tennis Courts.

The sculling team traveled to Rochester on Oct. 4 to compete in the Head of the Genesee Regatta.

The Blue and Gold raced in five shells against their opponent, Clarkson University, which only had two boats entered. Each pair completed a 5,000-meter headrace in the morning and a 1,500-meter sprint in
the afternoon.

Pfohl said the team has improved since its first race on Sept. 28.

“This weekend was a really exciting one,” Pfohl said. “We’re definitely looking forward to having more teams to compete with this coming weekend.”

The Bombers’ next race is the Seven Sisters Regatta on Oct. 12 in Amherst, Massachusetts.