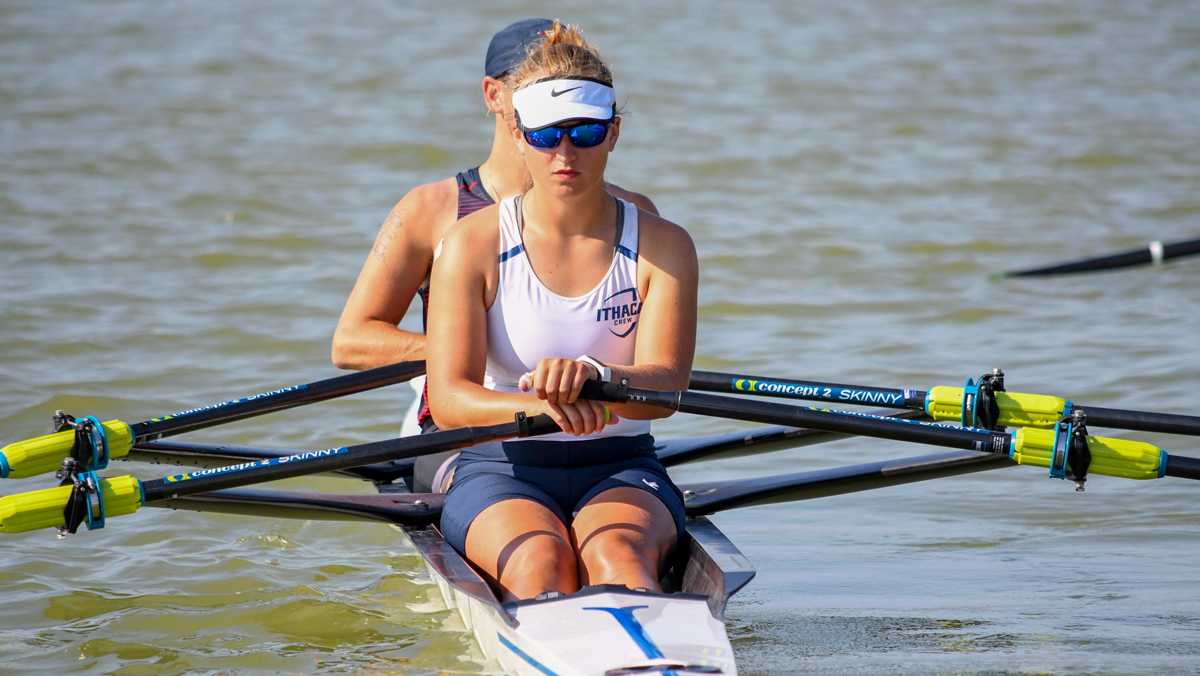 While her classmates slumped through their typical class schedules, junior Pearl Outlaw was in Bulgaria chasing her dreams.

Outlaw placed fifth at the World Rowing Championships in PR3 Mix2x double Sept. 14 with her partner Joshua Boissoneau. The pair finished in 8:29.62, seven seconds better than its preliminary time but 39 seconds behind the next closest finisher, putting it in last place.

Both rowers are para–athletes — Outlaw, who is partially blind, was participating in her second international competition, and Boissoneau, who has a nervous system disorder, was competing in his first international assignment.

Senior Writer Danielle Allentuck spoke with Outlaw about the competition, what it was like representing the United States and her future goals.

Danielle Allentuck: Overall, what was the experience of competing and representing the United States at the World Championships like?

Pearl Outlaw: Honestly, it was just an unreal experience. Just being at the venue, you were around these world-class athletes. Everyone was just working so hard. It was crazy. People have been working for years to get to this point, and you meet so many amazing people. Just representing your country and walking around wearing the USA gear, you get really full of yourself. You feel almost proud — you are representing something bigger than yourself. It’s a really exciting place to be — there is a lot of energy.

PO: It was honestly a little rough. It was our first year at World Championships. I’m insanely young to be going to senior worlds, and it was also Josh’s first time on the international stage. … We had one race on Wednesday, and that was just a race for lanes because they put the fastest boats in the fastest lanes, the most favorable with wind and current. That race was really the practice run because no matter what place we came in we were still going to the final. On Friday, we had the final, and leading up to it, Josh had a really hard week. As para–athletes, we have to go through a classification process both domestically and internationally. The reason for that is so entries don’t cheat the system. Josh had to go through that process, and they didn’t do the best and most thorough job. He was told that he was not going to be able to race and that, basically, he was not disabled enough to race. … Just the fact that he said he wasn’t able to be classified was ridiculous. We had to protest that, and he ended up getting reclassified, which is really exciting, and we’re both good for the next four years. It kind of caused him to not sleep for a few days leading up to race because that happened the Saturday before the race. His nervous system, the adrenaline, the stress was heavily impacted by that. It definitely wasn’t our best rowing, but we know what we need to fix, and we are going to come back stronger.

DA: How did you handle all of the emotions of racing and the extra stuff that was going on, especially the fact that you are so young, and this was your first world championship?

PO: I was surprised that I didn’t lose my composure a little bit more. I felt like my partner had been taken away from me. We both knew how well we could row together, and we knew we were being held back by something that was totally outside of ourselves, which is really frustrating when you don’t have the control, and that is just a part of rowing. Anything can happen when you have another person in the boat. You really have to be OK with just sitting and trying to do your best. … I did have a little bit of anger for the people that didn’t classify us correctly, but we used that anger to our advantage. I remember our first practice after that happened — we just went so hard we were both just sprint after sprint, going so hard and putting so much pressure on it because we were just letting it out.

DA: Were you able to meet and interact with the other rowers?

PO: Yeah, definitely. We really met the most people after racing was over because that is when people can let loose and aren’t super focused on their races. I got to meet one of my idols. I read her book in high school but another blind rower from Canada, Victoria Nolan, who is just an absolute beast. We met her and her guide dog during classification, and I fangirled so hard. I just got so excited when I met her. We got a chance to go out to dinner with the German PR3 double and the Austrians as well, and we know one of them well because she trains in Boston with us, so we are actually really good friends with Johanna from Austria. We make up a fake little rivalry, but we are actually buds. Other than that, countries kind of stay with their own country. … After racing, everyone just has a giant party and hangs out with one another.

DA: Do you have a plan in mind for what’s next?

PO: We literally sat down an hour after our race and started making a plan for next year. My plan is to stay with Josh as a partner, probably try to train with him a little bit over the winter and as early as I can over the summer. Everyone there talks about how experience and strength and ability go into being successful at the World Championships but honestly experience is almost as important because you do get the jitters. The people there that have been going for five, 10, even more, years are just so much more composed and relaxed, and it makes it so much easier to perform well. … For right now, in the short term, it’s going to be just focusing on the Ithaca season. We have Head of the Charles coming up, and Jennie Brian and I are rowing in the inclusion double race, which is one para-rower and one able-bodied rower. … I think we are going to try to go to Gavirate [Italy] and do the double there and go to a World Cup before World Championships — so just extra race practice, pretty much.