Senior captain fights back injury to compete in final season 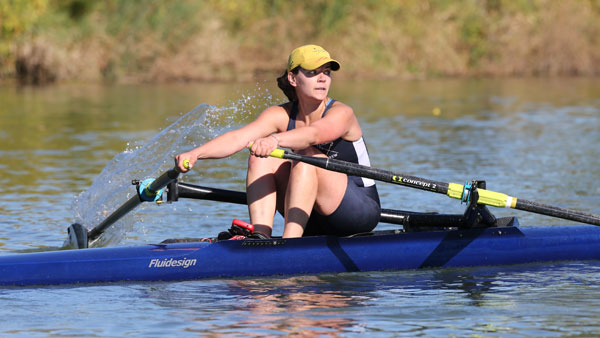 During her sophomore year, senior Dominique Lessard was lying on the floor of the Athletics and Events Center, facing the ceiling, when she should have been in the middle of a 2K off-water rowing test.

After months of winter training, the team was ready to hit the water, but Lessard’s body couldn’t take anymore. Her teammate, senior Megan Barry, didn’t think anything was out of the ordinary initially.

“I was in the middle of [my 2K], so I kind of had to ignore it,” Barry said. “I realized there was some commotion a few ergs down, but I just figured that someone had blacked out or fainted or had thrown up, that kind of stuff is normal. Once I was done I remember [athletic trainers] bringing a stretcher out, and I was like ‘Oh my god, this is really serious.’”

Lessard spent five hours in the Cayuga Medical Center that day, and doctors weren’t sure what was wrong. Head coach Becky Robinson and assistant coach Beth Greene were adamant that something had happened, but the doctors released her from the hospital with no diagnosis.

One week later, Lessard returned to the hospital in so much back pain she couldn’t lie down in bed without crying.

Finally, doctors concluded that Lessard had torn her erector spinae, a series of three muscles that run from the base of the head to the pelvis. At the same time, she subluxed a rib on her left rib cage, which led to intercostal muscle tears between her ribs. With that diagnosis, Lessard had to miss the Spring 2012 season.

When Lessard was able to move and walk on her own again, her athletic trainer introduced a series of physical therapy exercises. Because of her limited ability to move her body, Lessard, who was limited to leg exercises, said she did them on a leg press machine.

But Lessard did not let her injuries put a damper on her 2012–13 season. Last year, she regained her position stroking the women’s second varsity eight boat and successfully recovered without re-injuring herself in just six months.

Today, Lessard said she does not see her injury as something that held her back, but rather a learning experience.

“I have the kind of personality that is going to push through difficult situations because I feel like that’s what’s expected,” Lessard explained. “I was over-tiring myself, and I thought that I was giving my all to the team to benefit it, but really what I was doing was running myself into the ground.”

Junior Abbey Foxen was in Lessard’s boat in the spring of 2013. Foxen said that despite her injury, Lessard was still a leader watching from her wheelchair, which made losing her a little less challenging for the team.

“We lost her in the boats, but we never really lost her as a teammate, which kind of made it easier because she was always there for us even if she wasn’t on the water with us,” she said. “It almost made it more impactful for us knowing that she was still a part of the team and supporting us, even though she wasn’t racing.”

What frightened Lessard most about returning to the team was that she was not going to be able to get back to normal feeling.

“I was frightened at the thought that I had taken an entire season off, and I felt that I had set myself back,” Lessard said. “It was a really dark time to not be a part of the team physically just because I felt like I had ostracized myself. I was stupid and had not listened to what my body was telling me.”

However, the support Lessard gave her team during her time off was just one of the many reasons her team voted her captain of both the sculling and crew team this season. It was a moment Lessard said she was the most proud of in her career rowing for the college. She explained that because the team is her family away from home, she was honored to see that her teammates trusted her enough to lead them.

Barry, who has been rowing with Lessard all four years of her college career, had the opportunity to scull with her captain this fall. Barry said she admired the way Lessard handled herself in this situation two springs ago, especially because rowing injuries are so common.

However, Barry said she was most impressed by the confidence and the discipline Lessard had after such a serious injury.

“With an event like that, I feel like you could be out forever,” Barry said. “It took a lot of courage to just get her strength back and then just face that erg and say, ‘I’m going to own you again, and you’re not going to beat me.’”