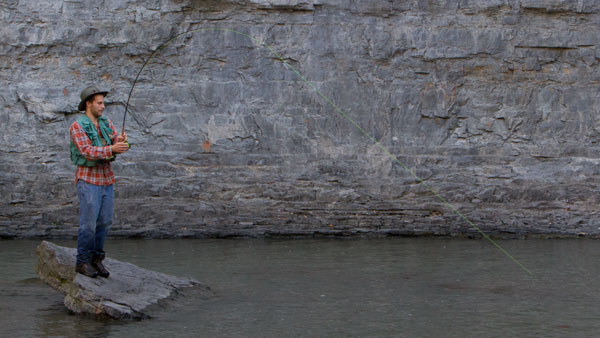 On a cool, fall morning, senior Hank Jefferson steps out of his blue minivan into the mud and onto the rocks of the Wildflower Preserve parking lot. He grabs one of his four fishing rods out of the back of his car.

Small cases are filled with fuzzy, feathered lures called flies, which resemble small bugs with hooks no bigger than a dime. Another small, clear box is filled with larger lures, some that are just as fuzzy and shiny as their smaller counterparts, and others that mimic small fish. Jefferson even has one that resembles a mouse.

Jefferson fishes four to five days a week in Ithaca during the fall, spring and summer, whether it be with a friend or on his own. As an outdoor adventure leadership major, Jefferson feels the most comfortable outdoors.

Despite having looked into the James J. Whalen School of Music after he visited the college, Jefferson explains, he ultimately decided that music was not a path he wanted to take.

“During my senior year, I realized that I would play music with my friends for fun for the rest of my life,” Jefferson says. “I really didn’t want to make a career out of it … I would have to live in a more urban area and would have to give up on nature to an extent that I was not comfortable with.”

After collecting his gear, Jefferson slams his trunk. He is dressed simply in jeans and a flannel. A wool felt green hat rests on his head. He tops off his attire with a green vest covered in pockets.

His boots hit the gravel as the sound of rushing water from Six Mile Creek gets louder.

Jefferson walks up to Giles Street and crosses the bridge over the dam, stopping to inspect the water above the falls, which is brown and murky from days of rain.

After finding clearer water below the falls, he travels down a rocky path just beyond the end of the bridge. The path has been carved out by the footprints of the many travelers who have visited the dam throughout the years.

The trees stop and open at the base of the falls. Stones of all sizes lay on the banks of the water. Directly across the creek is a giant wall of rock carved out from millions of years of water erosion. Turning to the left, an old brick building with boarded-up windows juts out. The water cascades down layers upon layers of rock. Even though the bottom quarter of his pants are wet, the water doesn’t stop Jefferson. As soon as he reaches the water’s edge, he climbs out into the base of the falls.

Jefferson’s dedication and love for nature have developed since he started boy scouts as a child and has grown over time, which has allowed him to become an extremely perceptive fisher.

“When I am fishing, my mind is practically blank,” Jefferson says. “My internal dialogue shuts off, and my brain is merely reacting to stimuli. I can focus every ounce of my being into the fish in the creek, and then the only thing in my mind is my fly in the water, the current drifting my fly around and the fish waiting for my fly.”

To the north of Ithaca are the Great Lakes, which give fishermen the chance to catch a variety of salmon. To the south is the Catskill Mountain region in areas like Roscoe, N.Y., which give fly fishermen the opportunity to catch large populations of salmon, trout and sometimes bass.

Jefferson grew up in Emmaus, Pa., about three hours from Ithaca in the Appalachian region. Like the Catskill Mountains, this area is filled with fishing spots, which Jefferson says are some of his favorites. A spin fisherman in high school, Jefferson made his shift to fly-fishing during his sophomore year of college. A mentor from home taught him fly-fishing basics, but Jefferson motivated himself to really begin participating in the sport. After reading the book “Trout Fishing in America” by Richard Brautigan, Jefferson was excited by the way the main character connected with nature through fishing.

The main character spent a lot of time up in the mountains chasing after trout,” Jefferson says. “He wasn’t a very successful fisherman, [but] just reading about him going into the mountains and looking down at the creeks and watching the fish move around really got me excited.”

Jefferson says he enjoys experimenting with the flies he uses — something not often done in other types of fishing.

“With [fly-fishing] there’s a lot more involved, and I’m casting over and over again, I can see the fish and what they do if I do something wrong,” he says. “You’re not just sitting there waiting for something to happen.”

He uses a graphite pole with five guides strung. A lime green fly line on a spinner sits at the end of the rod. Jefferson gives the line wrapped around the reel three big tugs, and the line coils at his feet.

Jefferson decides on the lures that resemble minnows, knowing that the rain may have injured them, and larger fish would be looking for minnows. With that, he strings his lure on, ties a knot using his hands and pulls it tight with his teeth.

With his right hand on the rod and his left controlling the excess line, he quickly lifts the rod to shoulder height. He then begins to wave the rod back just behind his ear and then forward, just past his head.

The fly line sails through the air, looping as Jefferson makes his quick change in direction. He lets out the line in his left hand little by little and slowly increases the distance he will cast.

Years of practice out on the creeks in Pennsylvania and Ithaca have allowed Jefferson to become a skilled fly fisherman. While he admits he was once only catching his flies on tree branches, he now trusts his ability and can catch fish often.

Once he feels ready, on his final forward cast, he lets the lure fly and points the tip of his rod at the water, so close it almost touches.

Dane Jackson, owner of the Ithaca Rod Company in Brooktondale, N.Y., said in Ithaca there is a sense of community among fly fishers. However, many may not fish locally. He explained the Finger Lakes region marks a section of creeks in New York state that has decent but not great fishing areas. Locals are able to catch a range of trout, bass and salmon, but these catches are nothing compared to the fishing in other areas of the state.

Jackson said fishermen from the Ithaca area fish mostly in the Cayuga Lake tributaries, residents also have an opportunity to fish locally. Fall Creek, Salmon Creek, the Cayuga Inlet, Six Mile Creek, Enfield Creek, Buttermilk Falls and Jennings Pond in the town of Danby, N.Y., are all popular fishing spots in the area. However, Jackson said fly fishermen often travel because fishing in other parts of the region, and even the country, factors into what makes fly-fishing sport.

“Locally, there are a lot, definitely a lot, of folks who fish, and fly-fishing is really a destination sport where the fun of it is to get out and get after it a little bit,” Jackson said. “It’s just a way to get out there and explore on your own and enjoy your surroundings.”

Jefferson stands and observes the water, spotting 6 inches of water above the rocky floor. His eyes trace along the surface of the water until he sees a drop off where the ground falls out roughly 18 inches. Thinking like a bass, Jefferson figures he would hide under that ledge. He ties his fly on the end of his fly line.

Jefferson drags his fly in front of the ledge and hopes to trick the fish into biting the lure without realizing it’s a trap.

“I just swing something bright and colorful and sparkly across his face, and he would just turn and hit it before he had a chance to really process what it was that swam past him,” he says.

Junior Curt McConnell, an environmental science major with a concentration in ecotoxicology, the study toxic substances in the environment, was Jefferson’s first college roommate. Though McConnell said his class schedule has made it hard for him to fish, he will sometimes go out with Jefferson when he has the time.

However, McConnell said he does not always share fishing locations with his fishermen friends.

“I use fishing as a means of escapement and as a way to connect with the environment on a more intimate level,” McConnell said. “I don’t exactly want to share it with a bunch of other people, maybe a couple of friends at most.”

Jefferson says his connection to nature has changed him as a person.

“I feel the most comfortable outdoors,” Jefferson says. “When I spend too much time inside, I feel anxious and nervous. Through nature, I have seen the purest form of beauty and the rawest form of death and a little bit of everything in between. I think the feeling of complete humility and unimportance can be taught most powerfully through nature.”

After two hours of fishing, Jefferson releases his sixth catch back into the creek. Reflecting on the challenge fly-fishing presents him, he explains that if it were easy, he would get bored with the sport and not want to continue it.

“If I caught fish every time I went fishing it would be boring, and I would probably stop,” Jefferson says. “I would say I am good enough at fishing that I can catch enough fish to stay interested and have fun, but I get refused enough to keep coming back.”