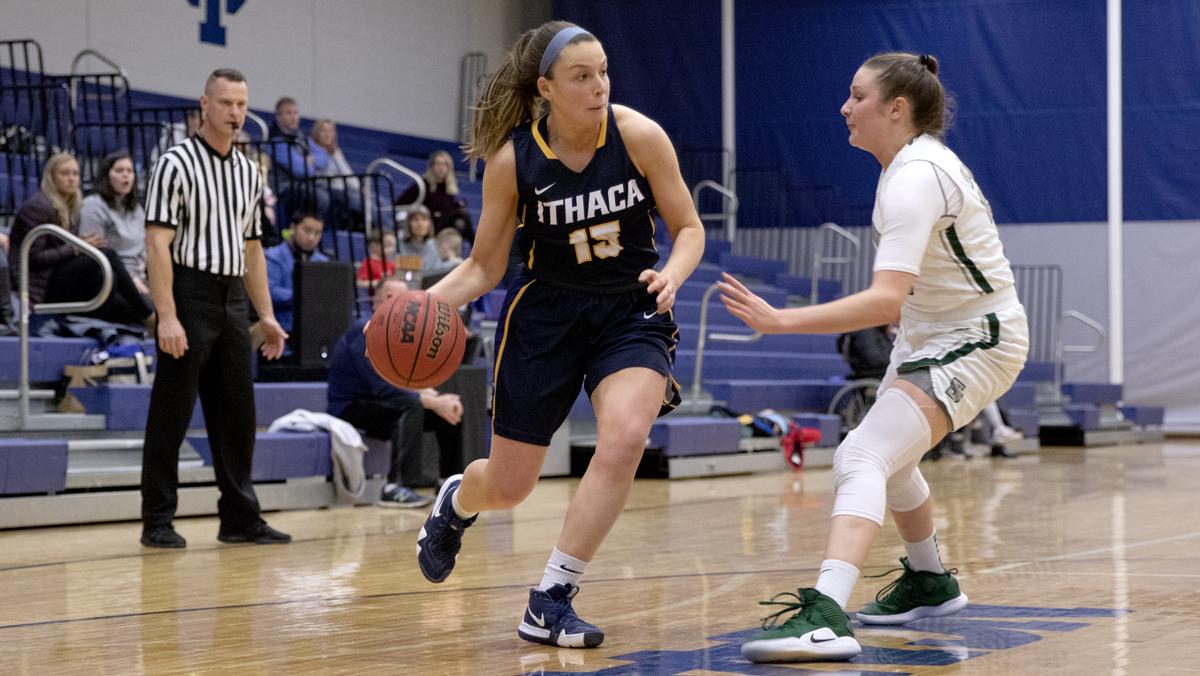 CONNOR LANGE/THE ITHACAN
Senior guard Meghan Pickell drives towards the basket past Skidmore College senior guard Haley English during the game against the Thoroughbreds on Feb. 1. Pickell has started in every game this year for the Bombers.
By Emily Adams — Assistant Sports Editor
Published: March 5, 2019

After a strong showing during the regular season, the Ithaca College women’s basketball team has been unstoppable so far in postseason competition.

The Bombers kicked off their championship season by defeating William Smith College in the Liberty League semifinal Feb. 23, then Rochester Institute of Technology (RIT) on Feb. 24 in a buzzer-beater, overtime thriller, winning their first Liberty League title. The team went on to beat SUNY Polytechnic Institute and Saint Joseph’s College of Maine on March 1 and 2 respectively to advance to the Sweet 16 round of the NCAA Division III Tournament for the first time since the 2013–14 season. The team will face DeSales University at 5 p.m. March 8 in Brunswick, Maine.

Senior guard Meghan Pickell was named the Most Outstanding Player of the Liberty League championship game after she scored 23 points for the South Hill squad and netted a last-second 3-pointer to send the game into overtime. Pickell has been a consistent contributor for the Blue and Gold since her freshman year and has started every game this season.

Assistant Sports Editor Emily Adams sat down with Pickell to discuss the team’s championship success, its outlook for the remainder of tournament and her final season as a Bomber.

Emily Adams: How is the team’s energy coming off of this weekend?

Meghan Pickell: The team energy is out of this world. We’re all pumped and excited because my class has lost two years in the second round. We’ve finally gotten past second-round curse and getting to go to the Sweet 16. It’s something we’re all excited to experience.

EA: What are you guys focusing on to keep your momentum going?

MP: We’re just coming in every day in practice and playing our best game, making sure we’re getting shots up and all the little stuff like that. We’re pushing each other to make each other better each and every day so that we’re ready for Friday.

EA: How do you keep the team morale high over such a long season?

MP: We’re hyping everyone up, getting everyone excited and making sure everyone is buying in. This is a really awesome experience — it’s not the same as the Liberty League. There’s just a different feeling when you enter into the tournament, and a lot is at stake because if you lose, you’re out. Everyone has that feeling of just wanting to keep winning and winning.

EA: What has been your favorite moment so far this year?

MP: The [Liberty League] championship game was just awesome for all of us to experience. Being able to host was really awesome — to have everyone come out and then to win that final game against our biggest rival in the League, RIT. Especially having it be a really close game, and Annie [Giannone]’s shot at the end was awesome.

EA: How are you feeling now that your senior season is near the end?

MP: It’s sad, just because it feels like my four years flew by. But this year we got to experience so many really amazing things. We were able to host Liberty Leagues, we were able to host the first round of the NCAA tournament and we were able to move on to the Sweet 16, which I know my class has never accomplished. All in all, it’s just a really great season for all of us.

EA: How is the dynamic between yourself and the other seniors?

MP: We’re all very close. We’re each other’s best friends, and it’s been that way since day one. I think that’s pretty unique about our senior class because we all kind of clicked from the start, and that’s brought us close over the four years. We’ve been through a lot together, and it’s awesome to be able to play basketball with your best friends.

EA: What do you think has made the team so successful this season compared to other years?

MP: I think we have good senior leadership, which is a big part of it. I think anyone can be a leader at any time, too. Even freshmen step up and say things that mean a lot to the players — even the quieter kids — and I think that when everyone contributes in that sense it makes the team really solid.

EA: What are your goals for the remainder of the season?

MP: It would be awesome to beat DeSales, and I think that’s what we’re all really looking forward to. We want to advance to the Elite 8. You can’t really put words to it what it would feel like to be there, so we’re just really excited about that.

EA: Where do you see the team going in the future?

MP: I think they’ll plenty of success. Cassidy [O’Malley] will be a senior, and KellyAnne [O’Reilly] will be a senior, and they’re two really outstanding players. Then Abbi [Field], Meg Yawman and Grace [Cannon] are all just sophomores, and Kelly Lamarre as well. Each class gets up and gets better every year, and the freshmen are outstanding as well, so I can foresee the team doing well in the Liberty League and winning it again next year.