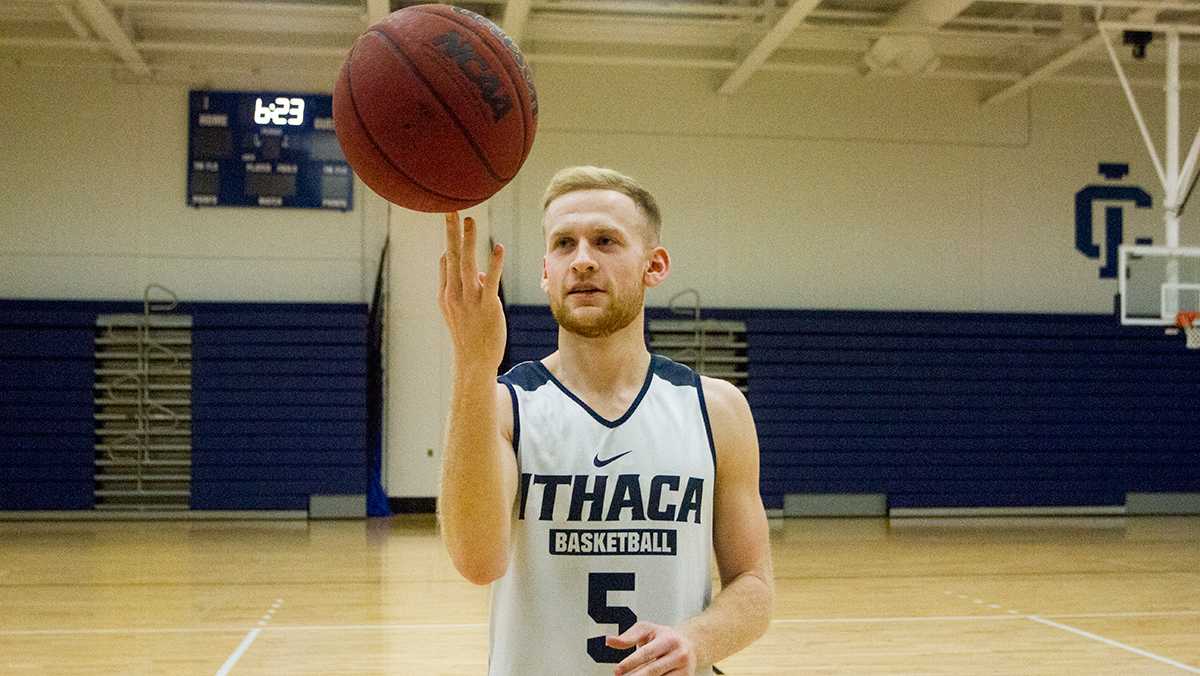 Whether it was the combination of Andrei Oztemel ’13 and Sean Rossi ’13 during the 2013 NCAA Tournament run, or Keefe Gitto ’15 and Max Masucci ’15 leading the Bombers to the Empire 8 conference semifinals last season, the men’s basketball team has always had multiple seniors to help lead it and inspire the underclassmen. However, this year they will only have one senior guiding the team.

Point guard Sam Bevan is the only senior on the men’s basketball team this season. The Strafford, Pennsylvania, native is one of the new captains on a 16-man roster that consists of only one other upperclassman, junior Carlin Champion. The rest are a combination of 14 freshmen and sophomores.

Bevan said he feels like it is his responsibility in his final season to be a mentor to such a young team.

“It’s my job to be a third coach on the court,” he said. “To teach these young players how to work hard and to be an Ithaca Bomber.”

The 6-foot-2 senior began playing basketball at the age of 5 with his dad and brother. A graduate of Conestoga High School, Bevan played on varsity for three seasons for coach Mike Troy and went to the district playoffs in all three seasons. Bevan knew he wanted to play college basketball when he was looking into what school to go to.

He said he credits his former coach for getting him to the next level and noticed by college coaches.

“My high school coach was really good at getting colleges to look at his players,” he said.  “Ithaca was one of the schools that responded, and once I came on my recruiting visit in the spring of 2012, I knew I wanted to come here.”

Since joining the Bombers’ roster at the start of the 2012–13 season, Bevan’s production has gone up each season. Last season, Bevan averaged career-highs in points per game with 10.5, assists per game with 4.6 and steals with 0.9, while averaging 29 minutes per game on the court. He was third on the team in scoring while starting a career-high 23 games.

Bevan said his high scoring is a result of his switch to point guard, a position that head coach Jim Mullins said Bevan transitioned into when he was a freshman on the team.

“He has evolved his game to become a point guard from originally being an outside shooting guard,” Mullins said. “We had the intent of moving him back to the wing, but he has done so well we decided to just leave him where he is.”

Bevan said he was not initially comfortable playing point guard. He moved to point guard after the departure of Rossi at the start of his sophomore season. But eventually, Bevan said the position grew on him, and he was able to change his game in order to play point guard.

“I was a shooting guard my whole career,” he said. “My freshman year I was mainly shooting three and trying to score, and now I’m a distributer … I try to get everyone involved.”


“My mom and dad have always been super supportive,” he said. “My high school coach, former assistant coach [John] Tanous, coach Mullins and coach [Sean] Burton … without out them I would not be at the level of play I am right now.”

Bevan said he does the little things that every coach loves because, although he is the only senior, one player does not make up the whole team.

Mullins said Bevan’s eventual departure as the final player from the Sweet 16 team in 2013 will be a huge loss for the team overall after the season.

“The biggest thing that Sam can give us is his leadership,” he said. “Hopefully his leadership skills will rub off on some of the younger players during this season.”

One of those young players that has taken the advice and mentoring of Bevan this season is sophomore guard Marc Chasin.

Chasin, one of the Bombers’ starting five last season along with Bevan, said Bevan is a great leader that has embodied the leadership responsibilities well and has the full respect of everyone on the team this year.

“He has the most experience of anybody on this team,” Chasin said. “He is our go-to guy, and he keeps preaching to everyone that everyone will get their minutes on the court … but they are going to have to work for them.”

Bevan said the reason he and Chasin get along so well is because of their chemistry on and off the court.

“He is like my little brother,” Bevan said. “He frustrates me, and me and him fight all the time, but we have good chemistry on the court, and you love playing with a great player like that.”

Bevan, a psychology major, said he has no plans as to what he will do after college at the present moment. Right now, he is solely focused on his final competitive season of basketball and wants to leave with no regrets.

“I don’t think I’m the most naturally gifted player that has ever come through Ithaca,” he said. “I had to struggle for everything. I got here, I worked as hard as I can to reach whatever my potential could be.”