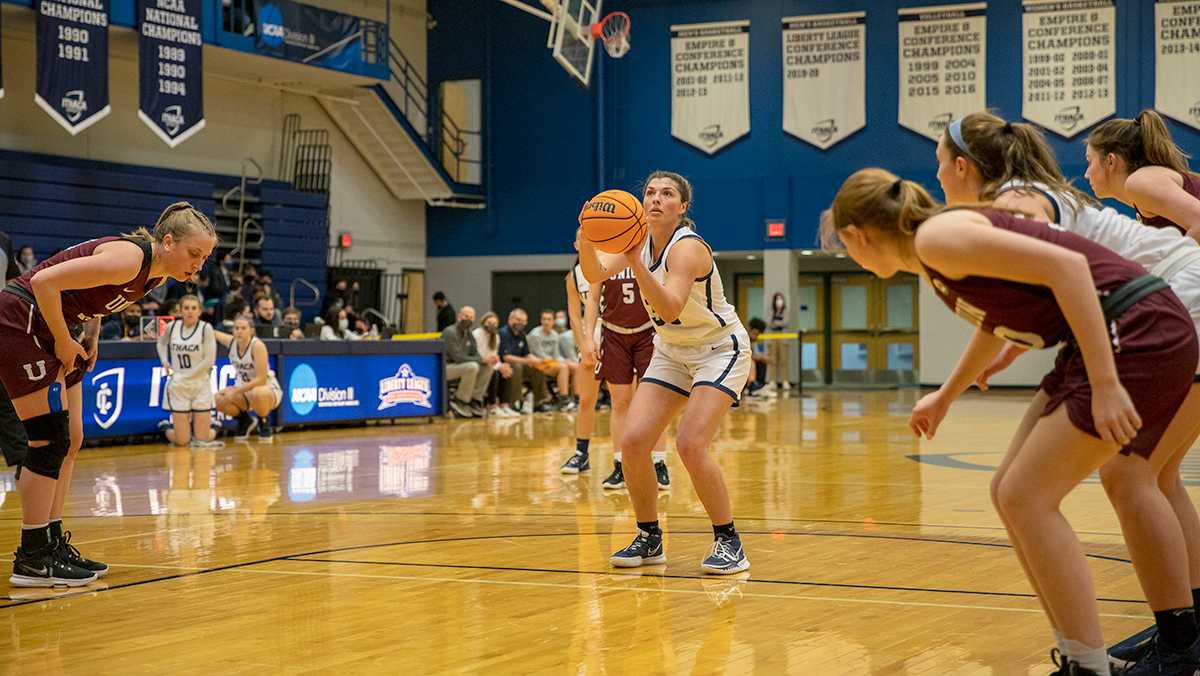 After a year of no basketball, senior guard Cara Volpe and the Ithaca College women’s basketball team made their return to the NCAA Division III tournament this season. Anxious to get back to work, the Bombers were ready to defend their Liberty League title. The team marched to an impressive 25–4 record, defending their Liberty League title and securing another trip to the NCAA tournament.

The Bombers posted their third consecutive Liberty League title by defeating St. Lawrence University 70–58 Feb. 27 at Ben Light Gymnasium. Volpe was a member of each of these teams and played a key role in this year’s championship. In the victory against the Saints, she scored 15 points while recording four assists, four rebounds and three steals.

During her senior season, Volpe earned All-Liberty League Second-Team honors by averaging 9.2 points per game and recording a total of 38 steals. This helped Volpe lead the team to the postseason once again, reaching the second round of the NCAA tournament. The Bombers ultimately lost in this round falling to No. 24 Springfield College in a 73–71 overtime loss. Volpe contributed to the South Hill squad’s effort, recording six points, seven rebounds, three blocks and four steals.

Contributing writer David Schurter spoke with Volpe about the postseason and her success during the 2022 season.

David Schurter: How do you feel about the team’s performance during the regular season?

Cara Volpe: I’m really impressed and I think anyone who watches us play is typically impressed. I think we kind of just work. I was just talking about this with [junior guard Camryn Coffey] and I think as the season went on, we just started to work so well together, and I think that’s what aided in our success.

DS: Being a senior on the team, what has it been like taking on a leadership role?

CV: I think on the court, it is important, but I think the most important leadership role I have played is off the court. Just in the sense of, I tried to get everyone to be mentally tough and pick people up if we are down. Like the game against St. Lawrence, we were down going into the second half, and I think like me and my other teammates who are not upperclassmen, we just said, ‘Really guys, the third quarter is our quarter, the second half is our half. We got this, let’s go.’ I instill everyone with just the thought of like, we are not losing, we are going to win this game. Just one play at a time.

CV: I was extremely excited. To be honest with you, going into the season I forgot these awards are a thing. And it was nice to get the validation of your hard work, and like how much you put into something you loved. So, getting recognized was really nice.

DS: Knowing that you have been in the big dance in previous years, how have these tournament trips helped to shape you into the player that you are today?

CV: I think just in general, we typically play on Friday and Saturday, and the NCAA tournament is just like that, you play Friday and Saturday. It is so exciting, and we keep trying to tell the underclassmen who have not been here before. We are like, ‘Guys, it’s so fun. … really is an unbelievable experience, especially playing at home with the fans and everything.’ … As for preparation with play, we have said throughout all our games we have been in the playoffs because in order to host we must win. So, we just go into it as if it were just like any other game and that has helped us push through.

DS: What is it like being able to play in front of your home crowd for such an important game?

CV: It’s amazing. … We have a huge fan base. I think a college in general, it’s a family atmosphere, and everyone supports others, especially the sports teams. … It’s amazing [to have] people cheering for you [and] happy for you. It also gets in the other team’s heads, which is always a plus, but it is amazing and fun.