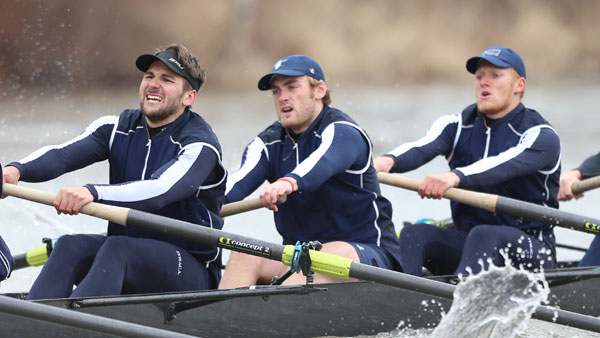 Durst Breneiser/The Ithacan
Senior Ethan Freedman rows in the middle of the men’s crew team’s Varsity 8 boat against the University of Rochester and Rochester Institute of Technology on April 5 on Cayuga Inlet. The Bombers finished in 6:07.3.
By Jake Siegel — Staff Writer
Published: April 9, 2014

For senior rower Ethan Freedman, the sport of crew was not his first love, second love or any love for that matter as a freshman at Ithaca College in 2010.

Freedman, now a senior physical therapy major, was an avid tennis player growing up and throughout  his four years on the Hightstown High School tennis team in Hightstown, N.J. Because of his standout play, Freedman received MVP honors and a team leadership award during his senior year.

However, in his sophomore year of high school, Freedman noticed his elbow often felt weak and he tired easily from swinging a racket, which he said hampered his progress as a tennis player. Though the ailment restricted Freedman, it didn’t deter him from finishing his high school career and trying out for the men’s tennis team his freshman year at the college.

As an incoming freshman, Freedman arrived early at the college for tennis tryouts, looking to bring his game to the next level and become a staple player on the tennis team. What Freedman didn’t know was that his lingering elbow problem would come back to haunt him and make it nearly impossible to play his beloved sport.

Freedman was never brought into a physical therapy clinic, so he technically was never diagnosed. However, because he is a physical therapy major, Freedman said he self-diagnosed himself through his PT classes with medial epicondylitis, better known as “the Golfer’s elbow.”

“My elbow problems were getting worse,” Freedman said. “I tried my hardest to deal with it, and eventually the pain was so excruciating that I could not even hold a racket anymore, and I was devastated because it was something I wanted to do.”

Freedman said he never felt getting surgery was necessary, but the treatment for his elbow was difficult and time consuming.

“I would constantly be icing my elbow, putting it in and out of bandages before I needed an elbow swing,” Freeman said.

After not making the final cut on the tennis team because of his injury, Freedman said he still wanted to be involved with athletics at the college. To distract his mind from the game he loved, Freedman went to the Student Organization Fair seeking out other opportunities.

“I signed up for every club imaginable to find another activity to keep me busy,” he said. “One of the lists I scribbled my name on was the school’s crew team.”

While reviewing the names on the sign-up list, former novice coach Manny Delgado invited Freedman to accompany the team during practice. Freedman participated in the team’s practices at Cornell University to master their strokes and was asked to join the team thereafter.

Freedman, like a majority of other players on the team, was a walk-on and had no prior rowing experience before entering college. This season’s squad has only three of the current seniors who rowed in high school: Erik Frid, Matt Kurz and Chris Noble.

Transitioning from the tennis courts to the boat, Freedman said he faced many challenges trying to maintain a rhythm in the boat with his teammates. He said the team aspect of crew was a difficult adjustment, given that as a tennis player he only had to rely on himself.

“While you are on a tennis team, it is such an individualized sport, so if you falter you know you are letting yourself down,” Freedman said. “With crew, you need to be in sync on the water. The only way to get better was taking thousands of strokes alongside my teammates.”

Head coach Dan Robinson said Freedman’s perseverance in learning the sport has helped the rest of the team accomplish its goals.

“Ethan has come a long way,” Robinson said. “I felt we needed more people like [Freedman], which is why he got his chance.”

Frid, the senior captain who races in the Varsity 8 boat with Freedman, said his teammate’s enthusiasm gives the rest of the team the necessary focus to perform well.

“He’s a powerful rower, and his ergs have always gotten better,” Frid said. “On any other team, Ethan’s erg times would stand out more than they do on this team.”

Looking back at his collegiate career, Freedman said he was glad he took up the sport and hopes to continue rowing after graduation.

“It was definitely worth it,” Freedman said. “I love the sport, but more importantly the men and women that I have shared this journey with.”