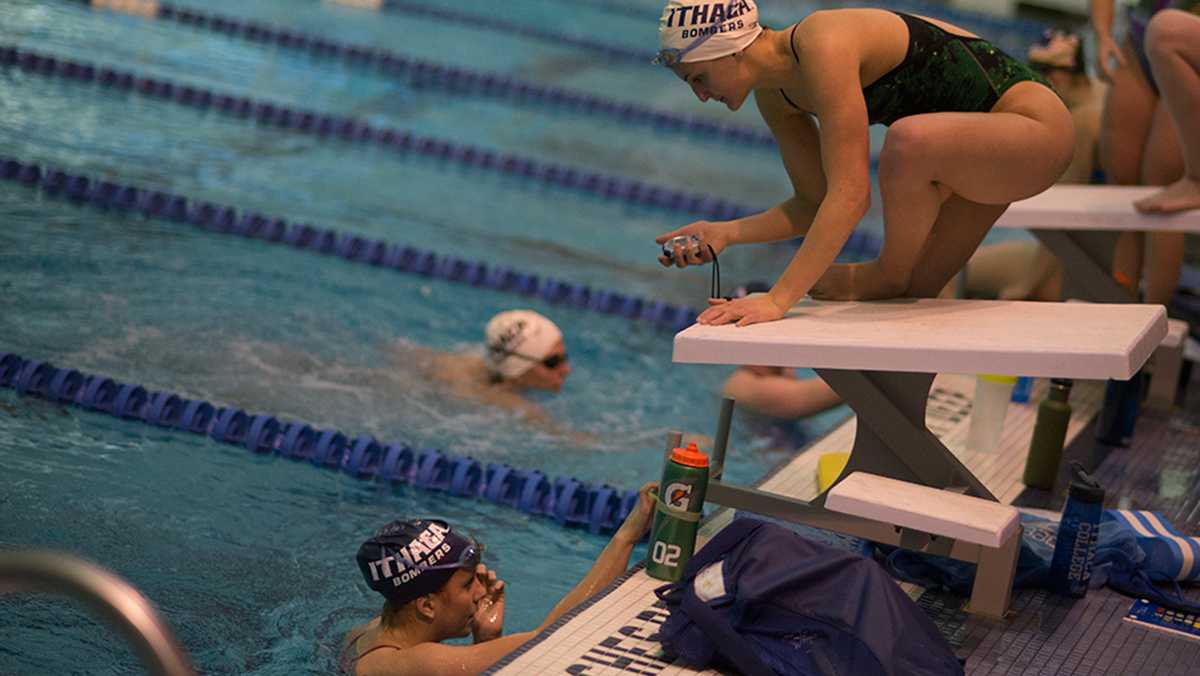 Fernando Ferraz/The Ithacan
Junior Grace Ayer times a teammate during practice Feb. 9. She studied abroad in Australia during Fall 2015 but is now back swimming for the Bombers.
By Justin Rouzier — Staff Writer
Published: February 10, 2016

The beginning of a season is hard for any student-athlete, but entering midseason after a semester abroad makes the transition even more difficult.

Seven women from the swimming and diving team went abroad in the fall semester. Since their return to campus, there has been a significant adjustment process.

A normal day for a swimmer includes an intense two-hour practice in order to keep in shape for upcoming meets. Those who study abroad, however, do not have the same structure and cannot maintain the training.

Junior freestyle swimmer Erin Hackett said she tried to keep up with her training by swimming frequently while she was away in Dublin and to find time to lift weights as well.

“I swam with the club team in Dublin, but it wasn’t as serious as the training here,” Hackett said. “But I think the less intensive training helped me because now at this point in the season, I feel more refreshed than I have in previous years.”

Head coach Paula Miller said this has been a recent trend. Miller said over the past five years, more women have gone abroad during the fall, and this year’s class is the largest to do so.

“This is something that didn’t happen 15 years ago,” Miller said. “But as a DIII school, no one is on [athletics] scholarship, so I encourage the girls to go because I don’t want to stop them from enjoying the experience.”

During the winter break in January, both the men’s and women’s teams trained in Fort Lauderdale, Florida, for eight days before coming back to the Athletics and Events Center Aquatics Pavilion.

In what are called “double days,” the swimmers and divers practice for almost five hours a day, twice the amount they normally practice. For those coming back, this can be particularly difficult.

Junior freestyle swimmer Jessica Ovalle said she had a hard time keeping up after being away in Amsterdam.

“I couldn’t push myself as much as I wanted to because I physically couldn’t keep up,” Ovalle said. “I had to set different goals for myself because it was only half a season, and I had to get into swimming shape first.”

Miller said despite being out of shape, the women did not make excuses when training.

“They were phenomenal. They were great role models for the younger swimmers,” Miller said. “We told them to ease their way into it and to stop if they couldn’t do something, but they tried really hard to stay in, and that motivated the other swimmers as well.”

With the winter season spanning over both semesters, studying abroad means missing a good portion of the season. In the beginning of the season, underclassmen got more swimming time in the absence of those who went abroad.

When those who were gone returned, the competition began for spots in certain races.

Ovalle said the threat of losing a spot in a meet is what keeps everyone on their toes.

“As an upperclassman, I lead by example,” Ovalle said. “Because of that, I think the people around me realize that I’m going to work hard to earn my place in meets, and so they work harder to keep it for themselves.”

Miller said she told the women in the beginning of the season that nothing is guaranteed.

“We told everyone in the beginning of the year, ‘These people are coming back, and they’re going to bump you if you don’t work hard,’” Miller said. “Times don’t lie. They’re objective. We were upfront with them and told them that the fastest people will go, regardless who it is.”

Freshman Rachel Smertz said it was a great beginning of the year, but having the upperclassmen back makes the team better.

“They were excited when they got back and were very motivated to finish out the season,” Smertz said. “They’re excellent swimmers, and their presence has increased the positivity within the team.”

The Bombers had a good start to the season, going 5–2. But after winter break, swimmers like Hackett and junior Grace Ayer were able to claim spots after getting back into shape quickly. In the last meet against Union College, Hackett and Ayer both placed first in the 200-yard freestyle and in the 100-yard backstroke, respectively.

Last season, Ayer was a national qualifier in the 200-yard individual medley. She placed 13th overall, earning All-American honors. Ayer said getting back to nationals this season is her goal, but for right now, she said states is her main priority.

“It was a really hard adjustment coming back to swimming 6,000-yard practices,” Ayer said. “Right now I’m trying not to focus on making it back to nationals but instead focus on preparing for states.”

As the Blue and Gold look to finish the season with what they hope will be a state championship, having those seven women back is a great confidence boost.