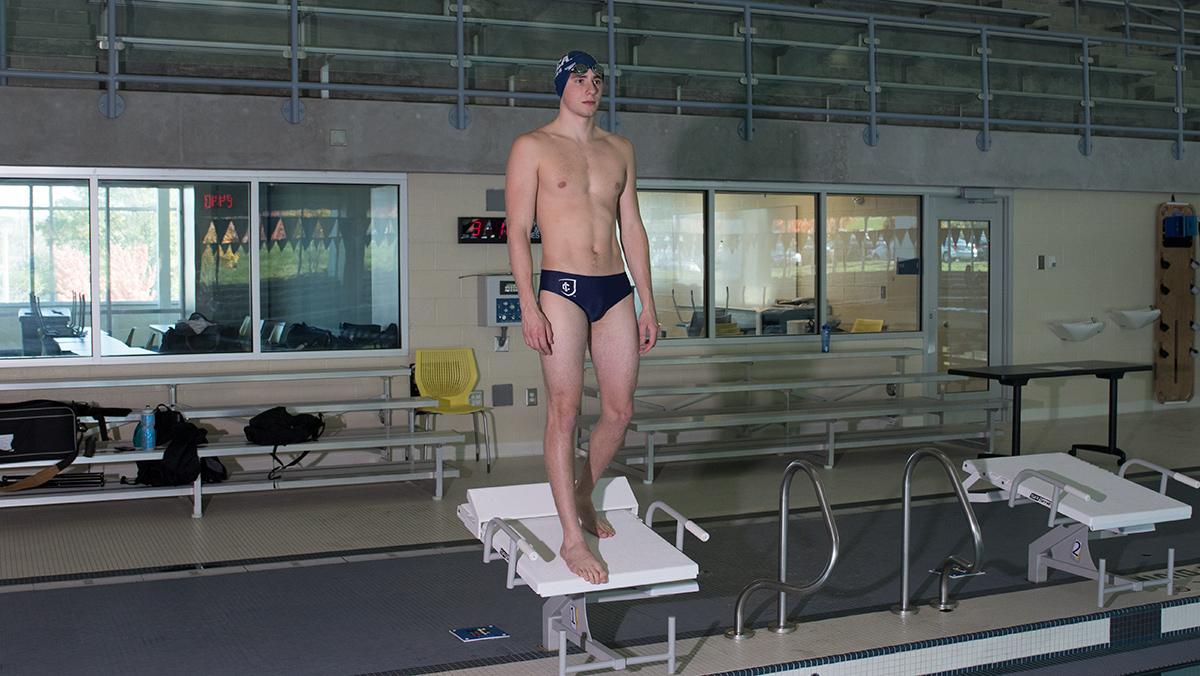 Usually, freshmen have the opportunity to look up to a larger number of upperclassmen to guide them through their first season. However, for the men’s swimming and diving team this year, the underclassmen greatly outweigh the upperclassmen.

This season, the team will consist of only six returning sophomore, junior and senior swimmers and 12 incoming freshmen. Swimming and diving head coach Kevin Markwardt said that due to the imbalance in upperclassmen and newcomers, this year will be a rebuilding year for the team.

Last season, the Bombers went 8–4 in dual meets. They finished in fourth place at the Upper New York State Collegiate Swimming Association Championship with a total of 870.5 points, and six Bombers earned Empire 8’s All-Conference honors. Sophomore Scott Hillen led the Bombers last season, as he qualified to compete in the NCAA Regional Diving Championship, where he was named an alternate for the NCAA Division III Championship.

However, Markwardt said that this season, Hillen and many other swimmers have decided not to come back to the team due to having higher expectations placed on them this year.

“I think that we kind of established an expectation as to where the team is going,” Markwardt said. “We established some things last year in regard to weight training and in regards to in–the–pool training, and some guys decided they weren’t going to be able to do what we were asking them to do. There’s a bunch of guys who were here last year who are still committed and are able to do what we are asking them to do.”

The team will rely on fifth-year senior Adam Zelehowsky to take charge. During his junior campaign, Zelehowsky participated in several events, including freestyle, backstroke, individual medleys and relays, and finished the season earning four state all-honors as well as one all-conference section. However, he had to take his senior year off from swimming due to his diagnosis with a heart condition called atrial fibrillation. Markwardt said he is expecting Zelehowsky to use his experience to train and lead the team.

Fellow senior captain Ian Foley, along with seniors Connor Schroyer and Gregory Markert, will also step into their leadership positions this season. The 2016–17 season will mark Foley’s second year on the team, due to an illness that made him take his sophomore and junior years off the team. For his last season on the swim team, Foley said he is looking to finally break 1 minute and 58 seconds in the 200 backstroke.

“That’s another reason that I wanted to get back in the pool: I knew that I hadn’t used everything that I had in the tank,” Foley said.

Sophomore Aaron Levin was named to the All-Conference list last season and will be looked to this season to build upon that success. Levin said he is looking forward to competing and earning points for the Bombers in the 50 freestyle this season.

He is also looking forward to becoming closer with the team, something that comes along with competing and practicing together every day, he said.

“Being united as one is my favorite part,” Levin said. “We have a lot of really hardworking, talented kids, and once we start competing, we will be able to get our chemistry down and really be able to prevail in the water.”

Foley said team chemistry will be very important this season and that he is planning on working to foster it.

The team will also be relying on freshman newcomers Pat Daly, Nate Bartalo, Andrew Mikhailichenko and Matt Quinney, who, Markwardt said, have all been impressive in practice so far.

Additionally, the team will look to Jake Hewitt, sophomore transfer from SUNY Fredonia, to earn points in the freestyle and butterfly events. Hewitt was a State University of New York Conference champion during his freshman campaign. Markwardt said he will have a large impact on the team this upcoming season.

“He’s a very talented kid, and we’re really excited about him,” Markwardt said. “He’s a key guy because he fills the events that guys don’t normally want to swim.”

Markwardt said that although this will be a rebuilding year for the Bombers, the team has a lot of young potential and is looking to win as many meets as possible.

“I think we need to take it day to day,” Markwardt said. “We have to go into practice every day and see what we need to work on. We want to win more meets than we lose this season.”

Swimming and diving defeats Cortland in third meet of year