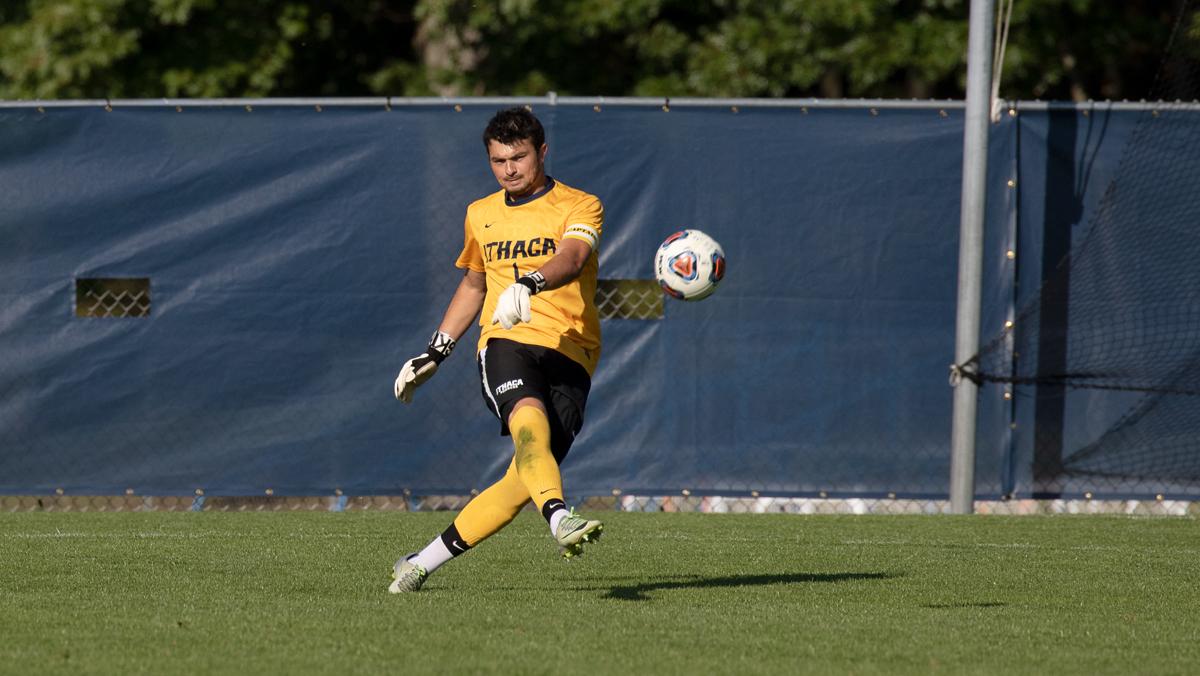 Senior captain goalkeeper Max Lichtenstein has been a leader on the field for the Ithaca College men’s soccer team since he transferred to the college in 2017.

He posted four shutouts in the first five games of this season — one of those against then-No. 5 Messiah College — while playing with a possible foot fracture that occurred during a scrimmage against Hamilton College on Sept. 10. Lichtenstein recorded a season-high 11 saves in a tie with then-No. 10 SUNY Cortland on Sept. 21 and received Liberty League Honor Roll recognition Sept. 23. He since captured two more shutouts against SUNY Oswego, Alfred University, Bard College and Hobart College.

This kind of success is not new for Lichtenstein. In 2018, he was named the college’s first men’s soccer All-American since 1997, led the Liberty League with 10 shutouts and ended his junior year with 53 saves.

Contributing writer Arla Davis sat down with Lichtenstein to discuss his foot injury, his leadership goals for the 2019 season and his future plans.

Arla Davis: How has your strong start to the season motivated you?

Max Lichtenstein: Facing those two tough opponents — NYU and Messiah — was a good start for us. … Starting out the season with those shutouts and then moving forward to play opponents who are just as or almost as good definitely gave me confidence.

AD: How have you been dealing with your foot injury?

ML: Against Hamilton, I got stepped on pretty hard and had a big black-and-blue [bruise] around my toe and the top of my foot. I had X-rays on it that came back negative, but they said there could have been a little fracture on the bottom of my foot that I could play through. I just know I can play through anything, especially if this is going to be my last season here. I definitely — unless it’s a major injury — will be playing through everything, so even though my foot isn’t 100%, I’ll just get a ton of treatment on it and fight through.

AD: What other challenges have you faced this season?

ML: I would say, in training this season, I’ve been trying to come with a different mind frame. I’m usually more of a game player than a practice player, but this season, I’ve been trying to deal with my own training. It was definitely lingering a bit after the Hamilton game, and I wasn’t able to do as much as I wanted, but since then, the coaches have been great about me getting rest during little parts of each practice. The rest has been great, and I’ve been icing it as much as I can, trying to get the swelling to go down, which it has.

AD: As an upperclassman, how has your leadership impacted the team?

ML: I’d say positively. I came here as a transfer sophomore year and have been a captain the last two seasons. I have a group of six seniors or fifth-years that surround me that do a great job, too. Personally, I’m more of an on-the-field leader, and my soccer IQ definitely helps the team. … I would just say inspiring the kids who are 18 while I’m 22 years old and inspiring the other seniors to be better every day. We don’t just have one captain: We have a lot of guys on the team who are good leaders. It has definitely been the best year so far leadership-wise for us

AD: What are your goals for the season?

ML: I definitely want to win a Liberty League championship. It’s only our third year in the league, and that was my first year here, but I know we have the talent to do it. Last year, we lost on a penalty kick in the final, so we still have a big chip on our shoulder and want to bring home that trophy to the school. Making the NCAA tournament would also be a great thing, and obviously, I want to win personal awards — everybody always wants to do that. If we are winning and going as far as we want to go, the personal awards will come. I want to take as much out of it as I can, and I am living every day like it is going to be my last day at practice, games, meetings — just trying to embrace all of them.

AD: What are your future plans?

ML: The coaches believe I do have the talent to go play after college and try to get professional try-outs, either in the U.S. or overseas somewhere, so that’s definitely a major decision I am going to have to make. … I try to take it day by day, but at the same time, I have to keep thinking about that.

Soccer goalie looks for a new start at Division III