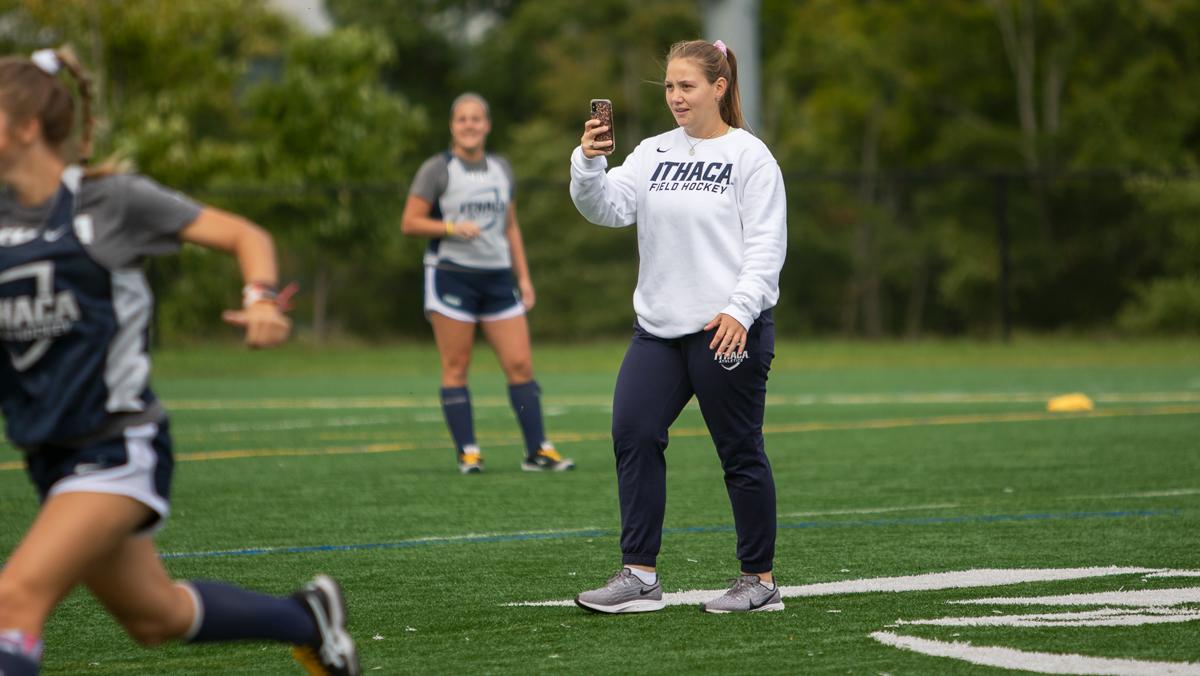 Without ever attending a game, fans of Ithaca College’s athletic teams can learn everything they need to know about the South Hill squads thanks to regular updates on their Instagram and Twitter accounts. From student-athlete takeovers to game highlights, sports teams are using social media to connect with former, current and future Bombers on and off the field.

Harris said she gives its audience a daily look at what the players are up to. She said she tries to highlight the team’s culture, dedication and the fun that it has.

“It shows the hustle and grit our players demonstrate every day as well as a lot of the funny or quirky times we have,” Harris said.

Harris said the team’s Instagram heightens the interest of students who may have heard about the field hockey team and allows them to get a closer look at the program.

“The players, coaching staff, culture and institution is what really seals the deal,” Harris said. “I think our social media will catch and keep the eye of prospective student–athletes.”

Studies have shown that colleges and universities that develop social media brands and use social media interactively see significant positive impacts on their student recruitment. Sports teams use these strategies on a smaller scale to connect prospects with a more specific brand connected to the overall school.

Men’s soccer head coach Kyle Dezotell manages the social media platforms for his team, which has 1,333 followers on Instagram and 382 followers on Twitter. Dezotell said the team’s accounts help him stay connected with recruits because likes and retweets can indicate to the coaching staff which athletes are most interested in the program. He said his goal online is to establish the program’s brand to potential prospects.

“We try to post something every day,” Dezotell said. “We’re all seeing the world in 30-second snippets now, so we’ve utilized some of the Park School students. There’s some really talented students who are willing to come do some work for free, so we try to be really active with it.”

Leigh Martino ’15 is the assistant coach of the women’s track and field team and has been running the program’s social media since she was hired in 2018. The team has 827 Instagram followers, and it had over 500 views on a recent video of the athletes doing the cupid shuffle dance with resistance bands on their legs for strength training.

Martino said the team’s main social media platform is Instagram, and her posts include updates on team events, information about upcoming competitions and successful results. Martino said she also loves to post pictures of the team participating in fun activities.

“In today’s world, it’s so important to meet your audience where they are at,” Martino said. “Since our audience is mostly recruits, our current student-athletes and their peers, it is super important that we are visible on social media and are able to give an inside glimpse on what we do every day and what makes our team so special.”

Martino also said that because track is a less popular spectator sport, social media helps the team publicize itself to build a fanbase.

“We would also love if more students and other student-athletes would come out and support the track team,” Martino said. “We think it’s important to get all of our meet information but especially our home meet information out there in hopes it will spark interest from the student body.”