Softball defeats SUNY Oneonta in a doubleheader at home 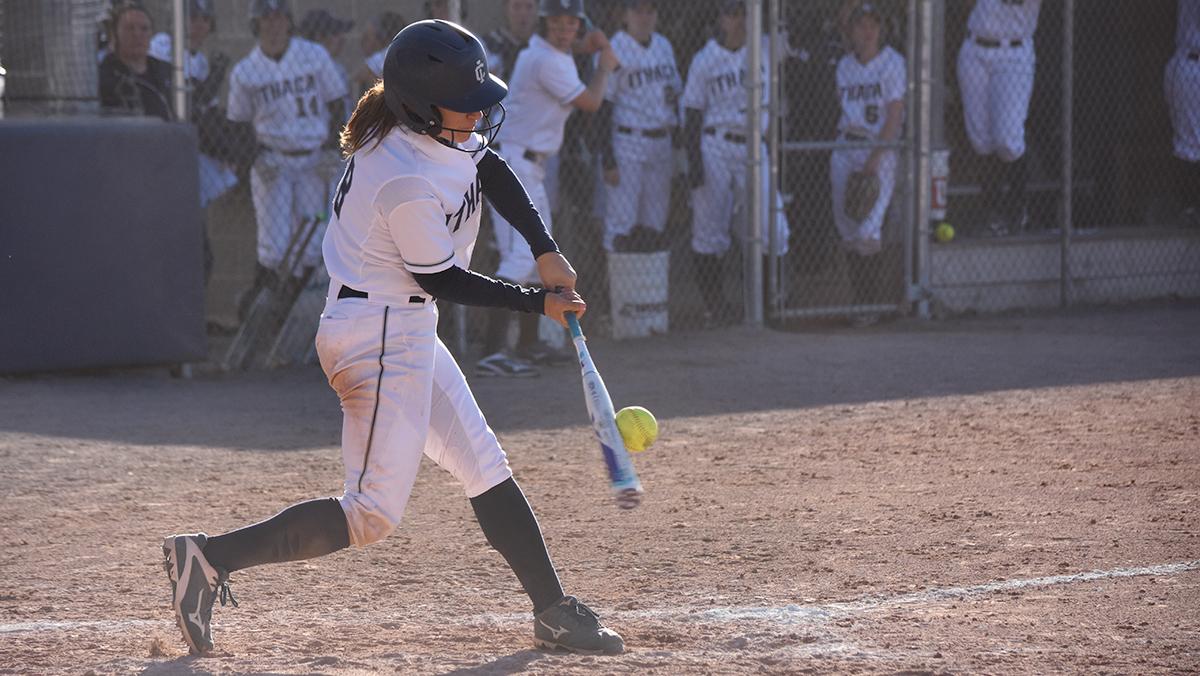 The Ithaca College softball team kept their winning streak alive with their eighth win after defeating SUNY Oneonta April 18 in a doubleheader 5–0 and 2–1.

In the first game, the Bombers gained an early 3–0 lead in the bottom of the first inning. The Blue and Gold’s offense came alive with two outs in the inning, starting with a single to left field by sophomore infielder Vanessa Brown.

Sophomore utility player Alex Wright followed up Brown’s single with one of her own, advancing Brown to third. Freshman pitcher and outfielder Shannon Grage pushed the Bombers’ first two runs across.

Sophomore catcher Alex Kimmel got on base after being hit by a pitch and came around to score from first on junior outfielder Allie Colleran‘s double to left center field in the fourth inning.

The Bombers pushed across their final run in the bottom of the sixth inning after sophomore outfielder Annie Cooney led off the inning with a walk. Cooney stole second and advanced to third on freshman pitcher outfielder Abby Shields‘ groundout. Sophomore infielder Nikkey Skuraton hit a single to right field allowing Cooney to score and give the Bombers a 5–0 lead and the win.

In the first game, sophomore pitcher Haley Congdon threw her first career no-hitter. She pitched seven innings and had eight strikeouts in the win.

In the second game, the Bombers got out on an early lead again, scoring one run in the bottom of the first inning. Senior outfielder Jessie Fleck hit a double down the left field line with one out in the first inning,  then came around to score on Wright’s two-out single up the middle.

The Red Dragons knotted the game at 1–1 in the top of the fourth inning with junior second baseman Rebecca Wentink‘s double down the right field line, scoring sophomore first baseman Lauren Sabatino from second.

Wright hit a walk-off double in the bottom of the seventh inning for the Bombers to secure the 2–1 victory over the Red Dragons.

The Bombers are back in action at 1 p.m. and 3 p.m. April 22 against Elmira College at Kostrinsky Field.