Softball team sizzles in opening games of the season 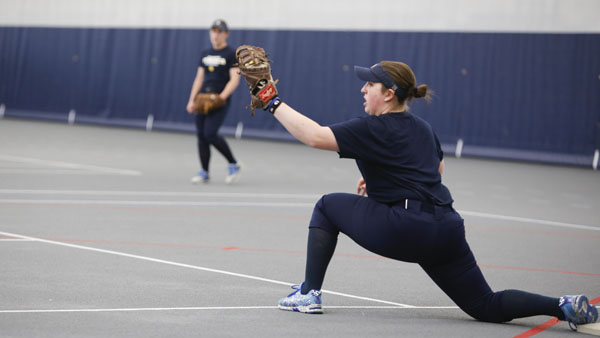 Tucker Mitchell
Senior infielder Sydney Folk catches the ball in her mitt during the softball team’s practice March 26 at Glazer Arena. Folk has recorded at least one hit in nine of 10 games played. The Bombers are 8–2 to begin the season.
By Alexis Forde — Staff Writer
Published: March 26, 2014

The softball team opened its season in historical fashion at the Dot Richardson games from March 9–14 in Clermont, Fla., winning its first eight games in a row for the first time since 1992.

The Blue and Gold finished the 1992 season at 20–11 and placed fourth at the NCAA Northeast Regional. As for this season, head coach Deb Pallozzi said she was not surprised at her team’s play when opening the season because she knew her team was good and the players had been performing well in practice. The majority of this season’s infield is upperclassmen, and Pallozzi feels senior leadership has contributed to their successful opening as well.

“We had good energy, and I knew we were healthy, so I expected, with our infield being as mature as it is, we would have a good run down there.”

Though Pallozzi couldn’t speak for previous years in terms of why the team hasn’t had a record like it did in 1992, she said the team struggled because of the competitive tournament it was in for the beginning of the season last year. The Bombers also had a couple of injuries last season, which is also why they didn’t have as good of a start as they had this season.

“When you go to the Leadoff Classic, you’re playing the best teams in the country, so that might be one piece to the puzzle,” she said. “We had some injuries; our third baseman turned an ankle. Injuries you can’t plan for, but you got to be prepared for them, and we weren’t as prepared in that aspect.”

Pallozzi also said the older the team gets and the longer it has been together, the better understanding it has of the game at the collegiate level.

“We had nine freshmen last year, they didn’t understand,” she said. “Our infield is a year older [this season], so I think that year’s worth makes a big difference.”

Though the Bombers had a good start, their momentum has slowed because they haven’t played on an actual field in a week and a half because of inclimate weather.

Assistant coach Rinae Olsen said the team felt excited about being able to play a series of games on an actual field, but going back to practicing inside threw them off a bit.

“The kids were really excited to get outside and play for sure,” she said. “We’re in [the Athletics and Events Center] now, but it’s been a solid week. Momentum-wise, we’re at a little bit of a halt, but they’re still excited to get out there and play again.”

Pallozzi said the trip the Blue and Gold take during the spring is more of a learning experience than anything else. While on the trip, they are more trying to prepare for their season rather than worrying about what kind of record they are going to have, which is why Pallozzi said she is not making a big deal about the team’s 8–2 start.

“When it comes to spring trip, it’s not about the record,” she said. “It’s about us preparing for our season up north here, our conference and regional play. If we can do it and be successful at it, great. If we do it and we’re not as successful, but we’re making progress and each day we’re getting a little better, great.”

Moving forward into the spring season, and with the weather getting warmer, the team will be able to have more on-field practices and go through more realistic game situations that are hard to replicate while in the A&E Center, such as properly catching fly balls or being able to fully run around the bases.

“That’s ideal for us to be out on our field,” Olsen said. “It’s nice when outfielders can actually get fly balls and not hit the ceiling.”

Senior Sydney Folk said the games in Florida showed the team what it needs to do in order to improve for the rest of the season.

“It’s always exciting when we get off to a good start,” she said. “It really showed us what we’re capable of, but we also learned a lot from our two losses [in terms of] what we have to work on.”

Folk said her team learned it needed to work on being more mentally prepared and focused for each game.

With every situational practice and actual game, the team works on what it needs to, which is helping it better prepare for the rest of the season.

“We do a lot of situational work throughout the preseason and more in season,” Folk said. “From each game, we learn something that we have to work on, and we continue to prepare for every new situation as it arises.”