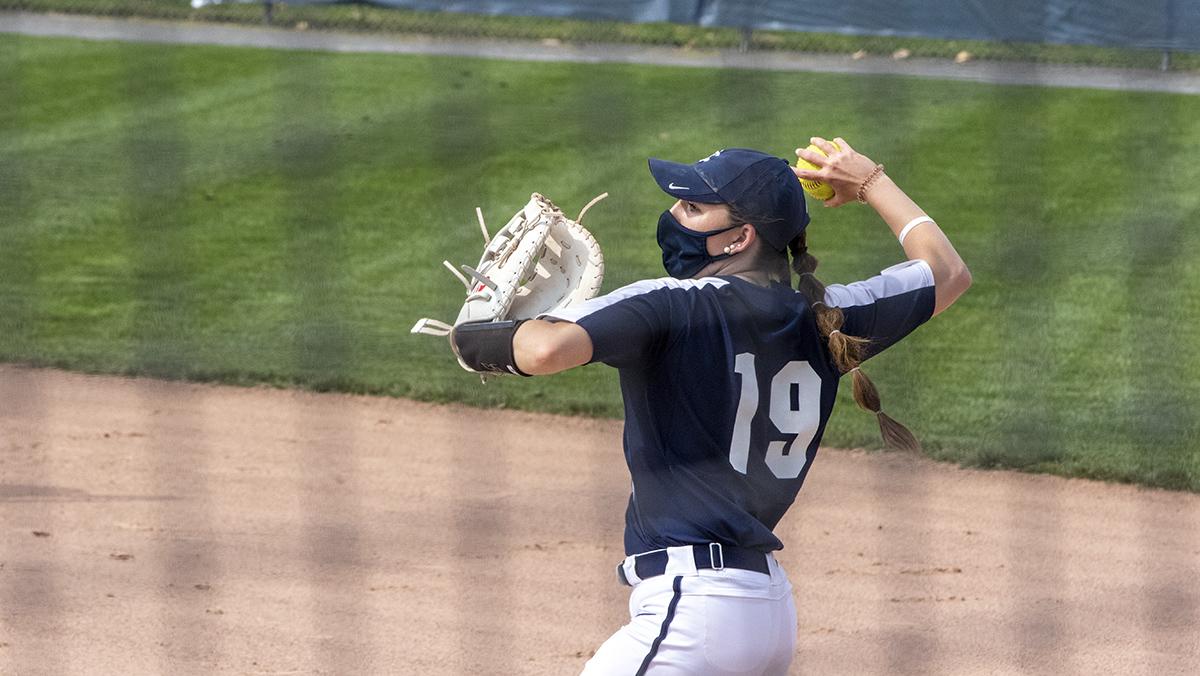 Ana Maniaci McGough/The Ithacan
Senior infielder Julia Loffredo had two hits and a run batted in for the Bombers in the two-game series against Alfred University on April 12.
By Dustin Terry — Staff Writer
Published: April 17, 2022

The Ithaca College softball team split a two-game series against the Alfred University Saxons in a doubleheader at Kostrinsky Field on April 12. The Bombers fell just short in game one, but made a comeback win in game two.

In the first game, the Saxons got a runner in scoring position in the first two innings, but three strikeouts by junior pitcher Riley Piromalli and good defense kept the Saxons off the board. The Bombers also threatened early, getting their first two batters on base, but were unable to get them across the plate.

The Saxons broke the deadlock in the fourth inning, scoring a run on a wild pitch to make it a 1­–0 ballgame. The Saxons would have had more runners on base if not for a diving play at first base by senior infielder Julia Loffredo.

The Bombers again continued to get runners on base, but kept hitting balls right at defenders. Alfred University’s senior outfielder Alyssa Guitron hit a two-run single in the top of the fifth inning to extend their lead to 3–0.

The Bombers once again got two runners on base in the fifth inning with two outs, but a deep drive to right field by Loffredo was caught for the third out.

Freshman infielder Sela Scheinman led off the sixth inning for Ithaca College with a double over the left fielder’s head followed by a walk by sophomore outfielder Hudson Hassler. After the runners advanced to second and third on a sacrifice fly by freshman catcher Yalina Ellis, freshman utility player Olivia Comolli singled to left field, scoring the two baserunners to make it a 3–2 game in the bottom of the sixth inning.

Junior infielder Tava Kasper singled to left field and graduate student outfielder Emma Kindblom walked to load the bases, but the Bombers could not get any more runners across after the next two batters stuck out.

Loffredo reached first base in the bottom of the seventh inning, but the Saxons closed out a 3–2 win in game one to snap the Bombers seven-game win streak. Piromalli pitched the whole game giving up five hits and three runs, and struck out eight batters.

The Saxons came out hot to start game two with their first four batters reaching base. The Saxons scored three runs in the first inning to jump out to an early 3–0 lead. The Bombers also wasted little time getting back into the game with a big second inning. Loffredo led off the inning with a solo home run to left-center field. A few batters later, Kasper hit another deep drive well over the wall in left field which head coach Hannah Quintana said was the longest ball she has seen Kasper hit.

Quintana said the two home runs were huge to getting the Bombers to stage their comeback.

“To get two runs back really quickly allowed us to take a deep breath and get us back into the game,” Quintana said.

Thanks to the two home runs, the Bombers were down just 3–2 after the second inning. Freshman pitcher Anna Cornell held the Saxons scoreless over the next three innings, giving up only two hits and striking out five batters. Freshman pitcher Melody Kappel replaced Cornell in the circle after four innings of work.

Ellis kicked off the bottom of the fifth with a third Bomber home run, sending a solo blast to left-center field and tying the game 3–3. The Bombers continued to apply pressure in the sixth with a walk from Kindblom and a single to right field by junior infielder Allison Dell’Orto. But the Bombers caught an unlucky break as the Saxons were able to get the force out at third base one batter later, stopping the Bombers’ momentum.

The Saxons got a runner to second base in the sixth inning, but a diving catch from Kasper at shortstop saved a run that would have given the Saxons the lead.

Hassler and Loffredo led off the bottom of the sixth inning with back-to-back singles. Hassler advanced to third on a fielder’s choice setting up a two-RBI double from Ellis, giving the Bombers a 5–3 lead heading into the final inning.

Kappel struck out the first batter of the seventh inning, but the Saxons got runners to first and third, and down to their final out. However, Kappel fielded a hard ground ball, throwing the runner out to end the game.

Ellis, Cornell and Kappel, who are all freshmen, are just a few of the Bombers younger players who have stepped into big roles this season. Quintana said they are an important piece to the team’s success so far this season.

“[The younger players] are a huge part of our team,” Quintana said. “With each day and a little more experience, they keep growing and they bring a lot of energy to the team.”

The Bombers split the Tuesday afternoon series with Alfred University, bringing their season record to 13–8. The team will next play four road doubleheaders at Union College, University of Rochester, SUNY Geneseo and Cornell University before returning to Kostrinsky Field on April 23 against Skidmore College.