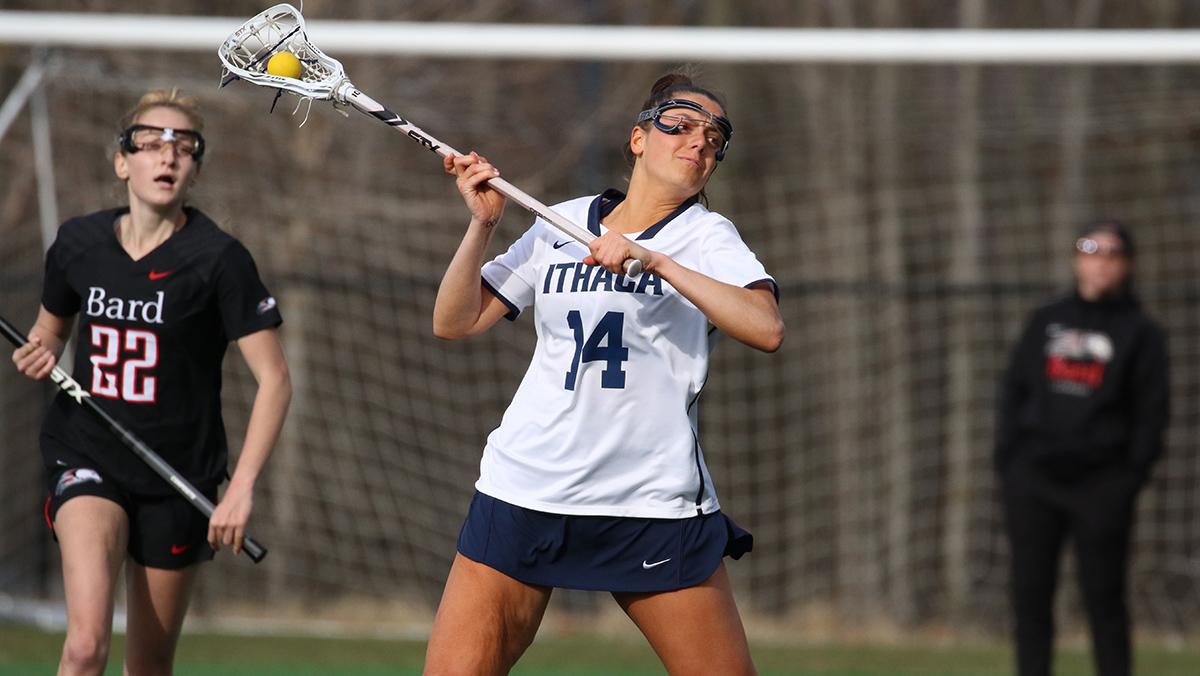 As the Ithaca College women’s lacrosse team navigates this season after graduating a large senior class last year, the depth of young players on the roster has shined bright to start the season.

The team started its season undefeated until its tough defeat to Liberty League opponent St. Lawrence University on March 25, but that has not stopped the team from being ranked No. 9 in the Intercollegiate Women’s Lacrosse Coaches Association poll.

After graduating nine seniors last year, younger players in the program have stepped up as leaders and performed on the field. Based on the team’s recent success, it is safe to say the underclassmen did not shy away from earning starting roles, as they have been productive on both sides of the field.

Sophomore attacker Maizy Veitch has led the way in the goal column for the Bombers. Logging more minutes as a part of the starting lineup for each game so far, she said the upperclassmen have played a significant role in her development. She said she particularly looks up to and communicates with graduate student attacker Madison Boutureira since they play the same position.

“She has always been in my ear telling me how to improve or how to fix something that I could’ve done better,” Veitch said. “She’s always been there to lift me up, in a way. I think that having her there, especially having her on the field, has given me a lot of confidence. It has created chemistry between us. I think that we have been able to do well on the field together.”

Veitch also said she and the rest of the team share that same chemistry off the field, which ultimately brings the whole team together, making it easier to play together on the field. Veitch said the team members eat dinner together after practices, have movie nights, attend local Division I lacrosse games and shoot around on the field in their spare time.

“I think that we’re just all like really good friends,” Veitch said. “I think our relationship off the field kind of translates onto the field in a way. It has let us be able to communicate and work [better] together.”

Sophomore goalkeeper Lexi Held has started in all but one game for the Bombers this season. While her role is much different compared to everyone else on the field by playing in the crease, she still watches closely to what her team does in front of her and how it operates. From her view from the crease, she said she feels her team does a great job touching up on every detail from a tactical standpoint.

“[The team focuses] on fundamentals and practicing basic concepts,” Held said. “Just really focusing on the things we can control. When watching film, doing all the little things that will make us better as a team, I think, is really important to get a better understanding of our opponent. In terms of ourselves, controlling everything we know and the small things.”

Defender Rachel Rosenberg is one of three graduate students on the team. With her four years of prior experience of playing collegiate lacrosse, she has been able to serve as a role model to set the example for the younger players on the team.

“We, as grad students and the seniors on the team, are taking on a mentorship role for them and help them develop their skills,” Rosenberg said. “[The freshmen and sophomores] can come to us and talk to us. If they have questions on how to do something better, or if I think that I see something and I’m like ‘Do that instead,’ we all have this back–and–forth dynamic where we can give each other feedback.”

Rosenberg also shared her appreciation for the coaching staff and all it has done to help lead the team to a successful season thus far, along with saying how head coach Karrie Moore has helped her throughout her five-year tenure with the Bombers.

“She’s a great coach and I appreciate all the hard work and everything she puts into our team,” Rosenberg said. “Without her, we wouldn’t be what we are. [The coaching staff prepares] us very well for every game.”

This year marks Moore’s seventh year as head coach of the Bombers, posting a career record of 85–26 since arriving on South Hill in August 2015. While the Bombers have been ranked anywhere from No. 4 to No. 10 nationally to start the season, Moore said it is important for the team to stay composed when hearing that kind of news, yet, at the same time, explaining what it truly means to be nationally ranked.

“We want to win championships,” Moore said. “If you really believe in your goals, you should be ranked highly. If we really are bought into our team goals, which I believe we are, it can’t be a surprise for us or something that we are distracted by. I think we just really stay focused on the things that we can control, the things that we can work on, what we’re doing well and what we can do better. So the rankings are something that we really don’t worry too much about.”

The Bombers have five games remaining this spring until the Liberty League playoffs begin. Three of those matchups are against other opponents who are nationally ranked in the top 25, including William Smith College, St. John Fisher College and Hamilton College. The Bombers will look to continue to dominate in the rest of its regular season matches in hopes of winning the Liberty League and national championship.