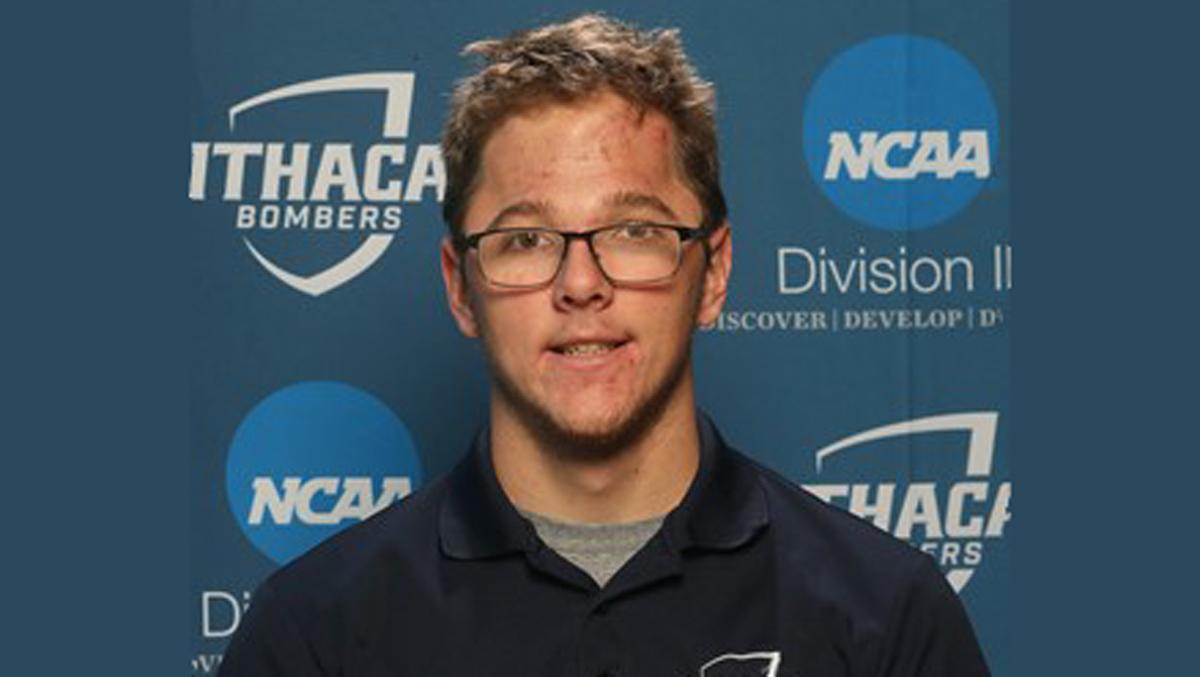 Courtesy of Ithaca Athletics Department
Ithaca College sophomore crew member Jake Lentz decided to take the fall semester off to focus on his sport, but this time it is as a coach, not an athlete.
By Matt Vander Plaat — Staff Writer
Published: October 6, 2020

Sophomore rower Jake Lentz is spending his fall semester a little differently than most Ithaca College students. Instead of taking part in class on Zoom, he spends his mornings riding a boat along the Barrington River in his hometown of Barrington, Rhode Island, coaching crew with the East Bay Rowing club. The COVID-19 pandemic opened the door to participate in the sport he loves from a completely different lens.

When the summer concluded and the college went online for Fall 2020, Lentz began to weigh his options. After spending the summer as an assistant at East Bay Rowing — the club he rowed for in high school — working with adults who were trying crew for the first time, Lentz was offered a job for the fall as the head coach of the novice rowing team, as well as an assistant to the East Bay varsity rowing team.

The club offers a junior crew program for students age 13 and up and adult rowing programs for those over 21. Both the novice and varsity teams are for high school students. Lentz said different factors played into his decision to take the semester off to coach.

“The biggest driving factor for me was that we had a book club with the Ithaca crew team,” Lentz said. “We read a book [called ‘Wanted: Rowing Coach’ by Brad Lewis] on coaching, and I started to see that aligning more in my future. Then, as Ithaca was making their decision, Deb Sullivan, the director of rowing [at East Bay Rowing club], said she would love to have me on the coaching staff, so I thought staying home to do that wouldn’t be the worst thing ever.”

“He is a fantastic role model,” Sullivan said. “He works hard with a fabulous sense of humor, and he has established the line between coach and athlete. The rowers we have absolutely love him, and he’s a phenomenal coach, so it was kind of a no–brainer.”

Ithaca College senior rower Ethan Maines also noted Lentz’s work ethic and humor. He said that Lentz brings a strong balance of the two traits for the Bombers along with being a great athlete.

“He is one of the best combinations on our team of both hardworking and able to joke around and lighten things up when needed,” Maines said. “In addition to being great personalitywise, he is also one of the strongest and fastest athletes on the team.”

Lentz said he has a hectic schedule to manage because he has to work with rowers of different skill levels, talk to parents about what he is teaching and develop training programs. Between the novice and varsity teams, Lentz coaches 28 athletes.

His team is in the water rowing two days a week and doing land training twice a week. Land training days are conditioning days that usually entail cardio or high–intensity interval training workouts. Lentz said that on these days, he tries to incorporate some socially distanced competition. Training on the water also looks different than usual because of COVID-19. The team is split into smaller groups, and they row in single or double boats rather than the typical eight–person boat.

Lentz said he uses techniques he learns from being on the college’s crew team and applies it to his coaching. He uses drills and workouts that the Bombers use in his practice plans, which he said makes it easier for him to explain to his athletes because he has already done them. Sullivan said she expects him to use the workouts that he has learned in college to help to push the rowers.

Lentz said that being able to coach crew allows him to learn lessons that he would not get from an athlete’s perspective.

“I’ve definitely learned about being prepared and transparent,” Lentz said. “Also being a leader and learning how to be a teacher because you have to make sure that you’re more than a coach and able to help the rowers with advice outside of rowing.”

“He brings a more relatable coach to the team,” McMillan said. “Most of the coaches are older into adulthood, but, with him still being in college and from our team, it shows the guys that if you keep working hard and rowing well, you will have a chance to row in college like he does.”

McMillan was a sophomore on the East Bay Rowing team when Lentz was a senior in high school. Lentz said that as a senior on the team, he took McMillan under his wing and even gave him a nickname, “Dirty Dave.”

McMillan said that Lentz uses his experience as a rower to lead the team as a coach. He said Lentz focuses on every team member to ensure that they are getting better.

“Jake’s leadership style is definitely vocal,” McMillan said. “He’s really good at making sure everyone is doing exactly what they’re supposed to be doing and making sure that they’re doing whatever it is exactly how he would do it. He’s quick to correct someone but never in a way that is harsh or aggressive.”

Lentz said that he plans to return to the college in the spring if classes are in person. He said he knows he needs to take advantage of this opportunity to coach at such a young age.

“After I finish my rowing career at Ithaca, I want to stay in the rowing world,” Lentz said. “I want to hopefully do some post-collegiate rowing and then get into coaching. I’m hoping this experience that I have now will give me a jump–start into coaching after college.”