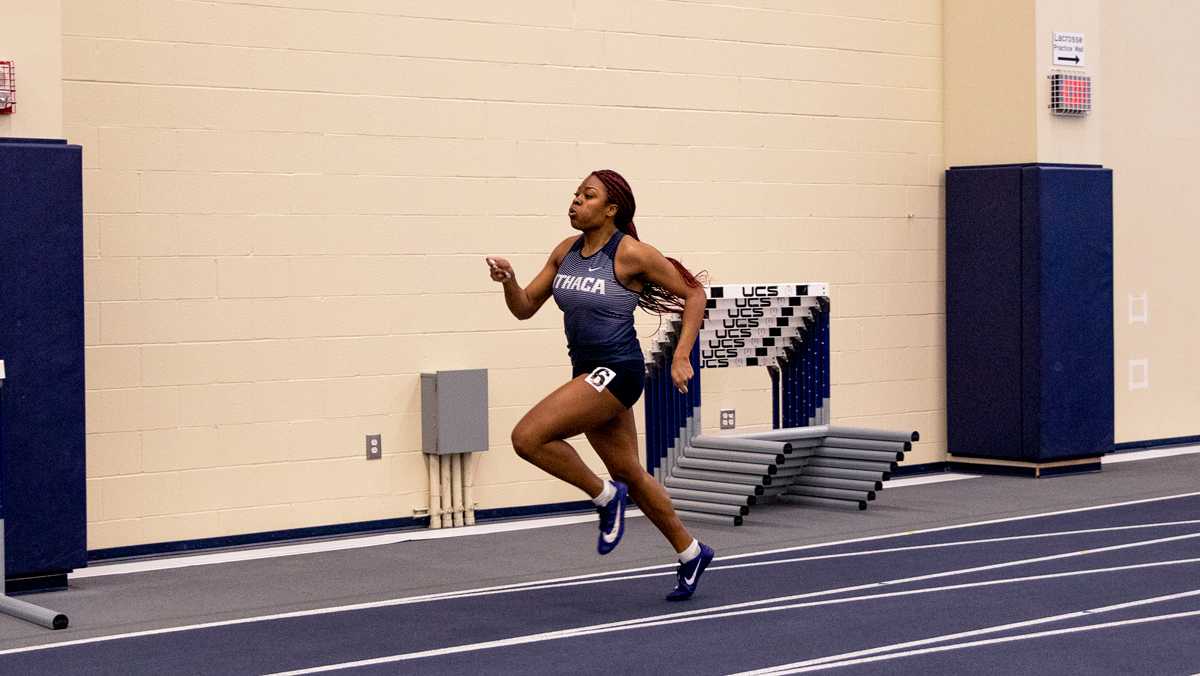 Ithaca College sophomore sprinter Katelyn Hutchison is currently the No. 1 400-meter runner in Division III, but, at this time last season, her personal–best time was approximately three seconds slower and she was not even in the top 50 nationally.

Hutchison posted her nation-leading mark of 56.30 at the David Hemery Valentine Invitational on Feb. 14 in Boston. The time also broke the college’s indoor 400-meter record set in 2018 by then-sophomore Ally Rheaume.

Because the track at Boston University is banked to make the tight indoor track turns faster, the time is converted up to a 57.05 so it can be fairly compared to athletes competing on a flat track for the purposes of the national rankings. Even with the conversion, she is just under a tenth of a second faster than the No. 2–ranked athlete. Hutchison said that seeing herself at the top of the rankings has been surreal.

“Not to get down on myself, but I’ve never been really good at track before these past two years,” Hutchison said. “I was never the girl that everybody worried about. Then, this past weekend happened, and it says ‘Katelyn Hutchison, No. 1 in the entire nation.’ I’ve never been No. 1 at anything, so to just see that and feel that boosted my confidence a lot.”

Hutchison said that she began running track in eighth grade because both of her parents competed in track and field. She said she fell in love with the individual nature of the sport.

“The thing with track is that you can mess up in practice,” Hutchison said. “ You will still have the opportunity to compete over the weekend. It’s not like you mess up and now you can’t compete. It’s you get to go compete and make yourself better.”

Head coach Jennifer Potter said that she has not been surprised to see Hutchison’s success this season.

“I think a year of college under her belt and a year of college athletics was helpful for her,” Potter said. “She came in very motivated based on her success last year, had a good summer of training, and I knew that she was in the right mindset. [She’s] one year older and one year wiser.”

Hutchison said that her summer training has contributed significantly to her success so far this season. She is from Chicago and competed with her local club track team, the Windy City Hammers, after her freshman season at Ithaca College concluded. She had the opportunity to compete at the USA Track & Field National Junior Olympic Championships in Sacramento, California, and raced on the 4×400-meter relay that finished in sixth place to earn All-American status.

“I was training pretty heavily for a while and competing almost every weekend up until the end of July,” Hutchison said. “I was just keeping myself in shape, making sure I’m still in a competitive mindset, making sure I’m working on fixing some skills or bettering some skills that I didn’t have the opportunity to do before the season ended.”

Hutchison also said she is handling the mental aspect of the sport much more effectively this season.

“Last year, one of my biggest things was getting in my head a lot and worrying about things I didn’t have control over,” she said. “One of the rules that Coach [Potter] has is you only have 20 seconds to feel bad about it, but that’s it. I make sure that I trust the process. It’s okay to mess up, and it’s okay to not be great at every single meet.”

Potter said that she has seen Hutchison get better at motivating herself while avoiding beating herself up for bad days.

“She learned from that and knew that that was not the way to handle things,” Potter said. “I think she thinks and takes a breath before she reacts, and I think she’s a little bit more realistic as to how a practice should be. It’s not a competitive situation. It’s doing things at a certain amount of intensity.”

Junior sprinter Allura Leggard said that she has seen Hutchison’s drive to succeed throughout the 2019–20 season.

“She’s just really pushed herself,” Leggard said. “She wants it so much. She’s wanted this ever since last year. Every single day in practice, at a meet, she always just has so much energy, so much spunk to do better than she did the day before.”

Hutchison has set very high expectations for herself heading into championship season despite the success she already has under her belt. She said she aspires to place in the top four at the NCAA championships and earn the All-American title. She has also set a time goal of 55.80 — half a second faster than her current best time. The national championship will be held March 13–14 in Winston Salem, North Carolina.

“I have a lot of confidence that it’s going to go well, but I also feel like it’s going to go a lot better than [I think], especially if I hit the goal that I want to at nationals,” Hutchison said. “I think some crazy things are going to happen to me.”