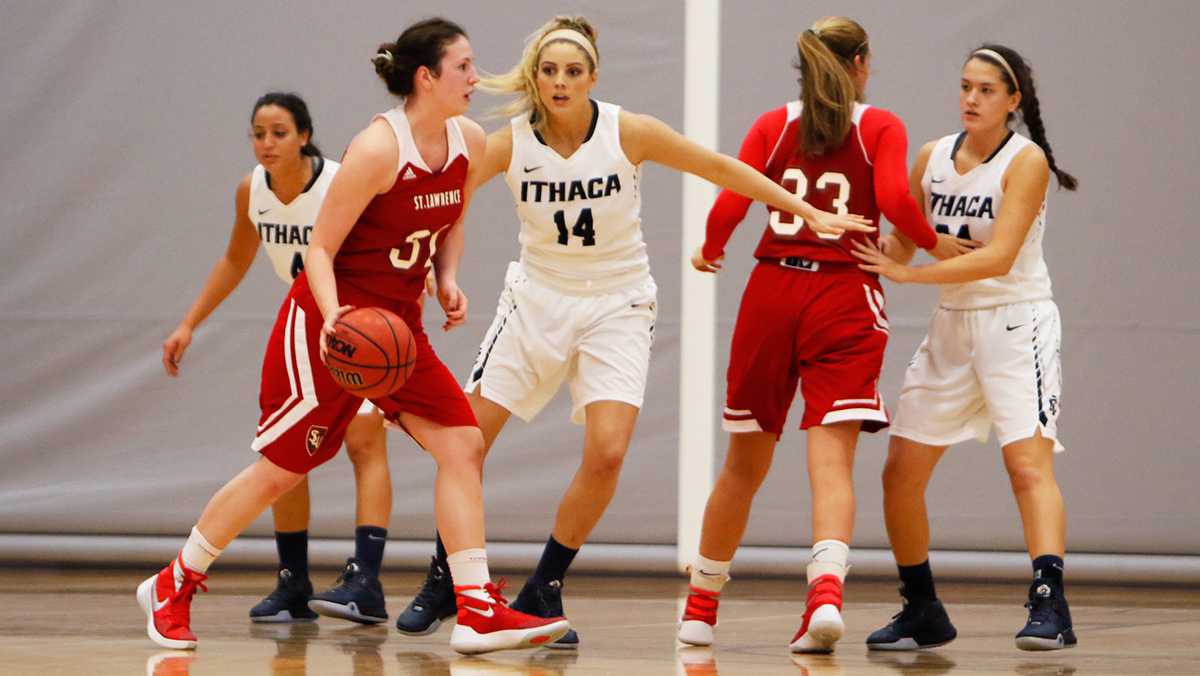 In the world of sports, change is a constant. Whether it be changing teams or roles, players are continually forced to adjust to new situations. For transfer sophomore Kiera Murray, who joined the women’s basketball team at the beginning of this season, change has been a consistent part of her college experience.

Murray began her first semester at Ithaca College this fall, her third school in three years, and joined the women’s basketball team as a guard this winter.

She started college at SUNY Oneonta in Fall 2013, where she was a member of the women’s basketball team. During her freshman season, she played a total of 63 minutes in 13 games. After playing with the team for a season, she chose to transfer schools after deciding to change majors.

“I switched into sports management, and [SUNY Oneonta] didn’t have that program,” Murray said. “So I looked for a school that offered more internships and more involved studies.”

While at Endicott, Murray made the team but redshirted in order to preserve eligibility, just in case she would need to stay an extra year for academics, as athletes are only allowed to participate in varsity sports for a maximum of four years. In order to stay close with the team, she worked as its manager, performing organizational tasks.

However, her time at Endicott was short-lived, and she only attended the school for Spring 2015. After only a semester, Murray realized she was not satisfied with the academic and social culture of Endicott and decided to transfer to the college to be with her younger sister, sophomore Annie Murray, who was a member of the women’s basketball team. Annie has since left the basketball team after four games into the 2015–16 season. She could not be reached for comment on her decision to leave the team.

“I left [Endicott] because I didn’t like the Boston area and wanted to be in upstate New York again,” Murray said. “I also wanted to be with my sister.”

In terms of transferring twice, Murray said the main struggle with transferring was related to academics, as many of her credits did not transfer to Endicott after leaving Oneonta. However, transferring to the college was a much smoother process.

“I think transferring the second time was pretty easy,” Murray said. “I had a base of friends here, and playing for the basketball team helped a lot.”

Despite transferring twice, Murray said her focus on academics and basketball kept her grounded and helped her avoid any struggles associated with transferring.

Since Murray began at the college, Annie said she worked hard to make her feel at home.

“I feel like we’ve been going to school forever together,” Annie said. “If it changed any way, it made it better having her here, like a piece of home.”

Murray said her transition to the college has been a smooth one because of the welcoming nature of the women’s basketball team.

“I kind of feel like it’s weird because it’s my third school, but I feel like I’ve been going here for a while,” Murray said. “I don’t feel like I just started new. It was easier playing basketball and everything.”

Murray’s teammates said her time with the team has felt very natural. Sophomore guard Erin Woop said she is happy to have Murray on the squad because of her team-first attitude.

“Kiera is a really smart player, and her style of play fits into what we are looking to do this year,” Woop said. “This made for a quick and easy transition of her becoming our teammate.”

Head coach Dan Raymond said adding Murray to the roster has provided yet another hard worker with a focused attitude. Despite being a transfer coming from a different college system, Raymond said she was treated like any other new addition to the team.

“Kiera earned her way onto the roster through her effort and attitude throughout the tryout period,” Raymond said. “We work the transfer students into the Ithaca College women’s basketball family the same as any new member.”

Since joining the team, Murray has switched from her natural guard position to forward for the Blue and Gold.

Murray said the transition from Oneonta’s style of play hasn’t been much of a challenge, as the two teams run similar systems.

“We played more with big players [at Oneonta], and I feel like [the women’s basketball team is] more of a quick, smaller team, so that’s the only difference. So it’s very similar in that aspect,” Murray said.

Murray also said the coaching staff at the college is refreshing to play for, as they support athletes both on and off the court.

“I feel like they support you in the academic side along with basketball, so it’s a really nice balance,” Murray said. “But they’re both sweethearts.”

Going forward, Murray said she is focused on maintaining a solid balance between basketball and academics, while also completing several internships. Next semester, she will be working with Cornell University’s athletics department as an intern, organizing events for various sports.

“My plan is to graduate in the next two years. I plan on playing basketball until my senior year and trying to maintain a 3.4 GPA,”  Murray said. “It comes down to time management and being effective.”