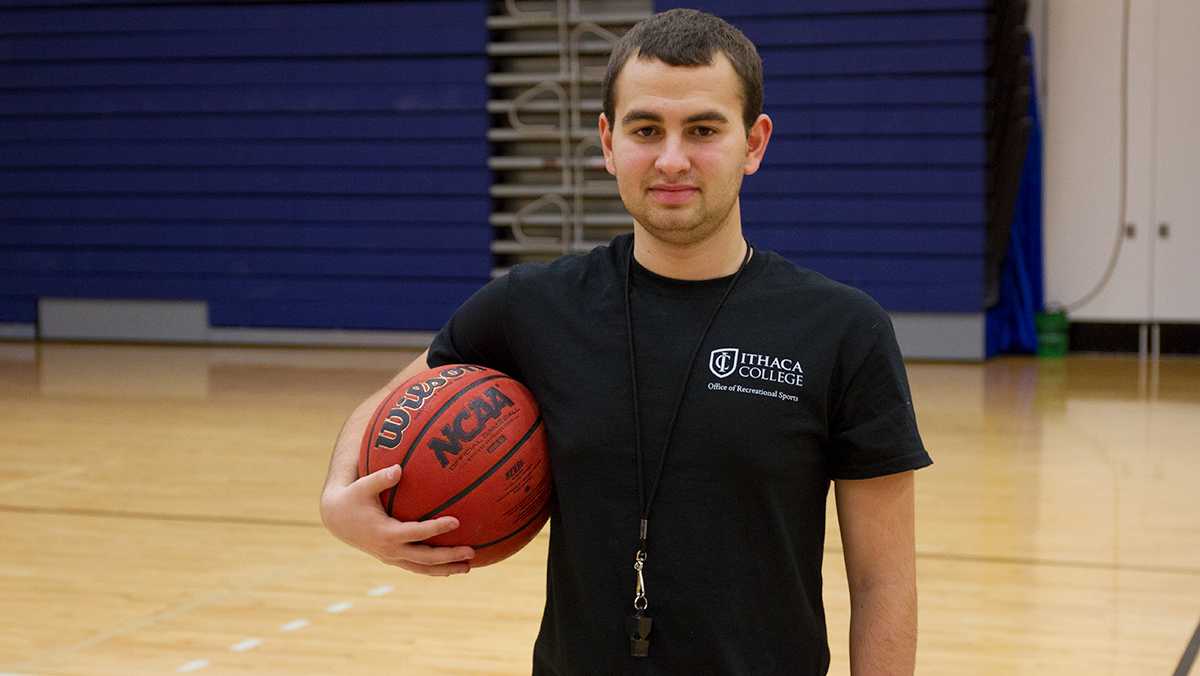 CONOR LANGE/THE ITHACAN
Freshman Charley Novak is a student referee through the Office of Recreational Sports. Referees judge teams on a scale from negative one to postive four based on sportsmanship.
By James Murphy — Staff Writer
Published: February 7, 2017

On a cool October night at Ithaca College’s Higgins Stadium, a referee whistles a play down during an intramural flag–football game. But he doesn’t match the typical image of a referee, as he is a student at the college.

Through the Office of Recreational Sports, all students have the opportunity to become referees for intramural sports. These students are undergraduate to graduate students and earn $9 per hour or for each game they officiate, since intramural games can run shorter than an hour.

In intramural sports, the referees judge the teams on a scale from negative one to positive four based on sportsmanship. A score of four means all players showed great sportsmanship while cooperating fully with staff, officials and the opposing team throughout the contest. A score of negative one shows that neither the players nor the captain showed self–control or respect for officials, staff or opponents. Teams can also receive an F if multiple players are ejected.

This score is largely impacted by how players treat referees, even when they don’t make the best calls. The better the players treat the referees, the higher that team’s sportsmanship rating is. Teams need a sportsmanship grade of 2.5 or higher to advance to that league’s respective playoffs, regardless of their records.

Freshman Charley Novack said two big components of being a referee are knowing and understanding the mechanics of the game.

Before student referees become official, they must go through a rigorous process, said Brian Beam, the intramural and club sports program coordinator.

“The process is interest, then training, then get them some scrimmage games at the trainings and we get them into the regular season.” he said.

One of the hardest things about being an official is the pressure to do everything right, Beam said.

“Everyone’s looking at officials,” he said. “They expect them to be perfect, and if you’re a student official making $9 an hour, it’s hard to be that perfect, but we have the expectations of the participants. We have the expectations of the officials to be able to put up with so much and then not take stuff at other times. So getting them to develop not necessarily a thick skin, but being able to know how to handle those situations.”

Senior Bryanna Love said being a referee has taught her time management skills and the importance of being responsible for her actions.

“This is a program where if you don’t show up to work, you kind of mess up everyone else’s schedule, and then people are freaking out because we need a ref,” Love said. “I’ve definitely learned that if you’re gonna be somewhere, you should be there, and if you can’t, you’ve got to tell someone.”

The Office of Recreational Sports has several tactics to get people interested in officiating. The supervisors will recruit students they know to become referees and use word–of–mouth and advertise to draw interest.

Beam said the students’ dedication to the program makes it stand out.

“You get some students [at the college] that are solely committed to recreational sports,” Beam said. “Enough to where they make it their profession.”

Beam said some alumni of the program have gone on to be successful referees, such as Clark Stridsberg ’16. After graduation, Stridsberg became an intramural sports graduate assistant at Virginia Polytechnic Institute and State University.

Love said being a referee helped her become a leader and learn what to do when people disagree.

“It’s definitely helped with my leadership skills, especially since I started off as a ref and then I became a supervisor throughout the years,” Beam said. “You definitely learn how to handle a lot of conflict, which is really good for the real world.”

Students who become referees learn a great deal, but Novack said one of the main benefits is the social opportunities.
“If you love the game and have a passion for officiating, or you want to make some extra side-cash and you want to meet new people and run around, come and have some fun officiating,” Novack said.

Sports One on One: Senior club basketball player Ahmad Boyd

Clubs pair together to host Swim-A-Thon for Autism Speaks